Originally titled The Red Robin, Altered Minds’  journey to the screen (big and small) was a long endeavor. Considered a 2013 production, the origination of the film dates back to 2007/8, and early shot footage was used to help secure additional funding to continue the production (leveraging the quality of the work to reassure potential investors that it would be worthwhile). The film’s premiere, with its new title, took place in November, 2015 (along with release on digital) and now a DVD release. It’s hard to deny the tenacity of the film’s writer/director/producer Michael Z. Wechsler – and given how well the film turned out, it appears that none of the arduous journey affected what shows up on screen.

Altered Minds, besides being an engaging psychological thriller and mystery, finds something interesting to say about the nature of trauma and the often unpredictable consequences of our actions.

“If a man fails his family, he fails life.”

Nobel Prize winning Dr. Nathaniel Shellner (Judd Hirsch), a man who gave up a lauded career as a CIA psychiatrist for humanitarian pursuits, is dying. His family gathered for a reunion, including his biological son and three children he and his wife, Lillian (Caroline Lagerfelt) adopted as war orphans suffering from post-traumatic stress disorder, following Dr. Shellner’s work with. One of his adopted children, Tommy (Ryan O’Nan), an unsettled novelist, makes startling claims. What should be a celebration of their father’s life and work becomes a dance of deceit and doubt as Tommy struggles with disturbing memories or torture, abuse and experimentation under his father’s care. Dr. Shellner say these memories are not real but rather the result of dissociative amnesia resulting from the post-traumatic stress of his childhood, but Tommy is not convinced. Fractured by the love for his father and the painful memories he cannot escape, his behavior becomes erratic. His adopted sibling Harry (C.S. Lee), and Julie (Jaime Ray Newman) don’t know what or who to believe, and the Shellner’s biological son, Leonard (Joseph Lyle Taylor), is angered and his resentment at the brothers and sister that joined his family is revealed. But before the night is over, the truth will out.

Michael Z. Wechsler’s directorial debut, working from his own screenplay, is a tight and involving psychological thriller that moves like a dramatic-mystery. Anchored by a set of terrific performances and crafted carefully with assured camera movements, superb cinematography, and a keen sense of storytelling, the film is both brisk and patient in how it chooses to unfold. The intriguing ideas at the core are revealed carefully within the confined and cold winter setting which helps establish a palpable sense of brooding. With simmering and intense performances, Altered Minds displays handles its mystery with dramatic weight and production values that belie it’s entirely modest budget.

The cast deliver fine performances, but it is the torment and trouble displayed by Ryan O’Nan as Tommy, and Judd Hirsch’s Dr. Nathaniel Shellner – a father failing in his health and ultimately the care and unity of his family, that standout as career highs. Within the confines of the family home, where the film is almost entirely set (perhaps necessitated by the realities of making a small, independent film), an enticing display of mental claustrophobia and taut nerves unravelling becomes the emotional core of the story. Caroline Lagerfelt’s portrayal of the faithful wife and mother, Lillian, arcs perfectly as the story unfolds – from unabashed devotion to doubt and internal despair. C.S. Lee’s quiet, almost shy, Harry is punctuated by a quick downturn of emotional stability, handled well by Lee. Joseph Lyle Taylor’s resentful biological son, Leonard, handles his grit teeth and brimming resentment adroitly. If anything, it would have been nice to have seen more of Jaime Ray Newman’s character Julie; perhaps a little more of who her character was as an adult. She’s a terrific actress (who first came to my attention from her recurring role on Syfy’s Eureka) and there were opportunities in the film for her to be more present, even more of an emotional anchor for Tommy, and for a deeper tête-à-tête with her father or brothers. That might be personal preference, but regardless, she makes her mark here, as do her fellow cast members.

As a film lover, “play”-like movies have always held a fascination with their confined staging and reliance on what is said, by whom, and how. Altered Minds feels a little like that, and through the film medium – shots, editing, score – delivers a contemplative sensibility about the production. It’s gracefully shot (with cinematography by Adrian Correia) and neatly staged to capture strong performances. The confined location compresses the emotional unbalance of Tommy and the reverberations his possible paranoia has with the rest of the family. But at it’s all so wonderfully understated and in service of the story – with nothing left to waste.

Watching Michael Z. Wechsler’s confident work here is reassuring for the future of independent film and the creative and entrepreneurial filmmakers driving them. When one accounts for the struggle and endeavor in earnest to get the film made (as he shared with me in November 2015) the resulting film is even more impressive.

A small-scale, traditional psychological thriller, framed as an intimate dramatic mystery to decipher, Altered Minds succeeds at pulling you into the crumbling family dynamic and into the chaos of Tommy’s fractured sanity.

Framed at 2.35:1, this DVD from Gravitas Ventures features good contrast, strong blacks, and clarity that shows off the excellent cinematography (the film is beautifully lit). Flesh tones are all natural – warmer during flashbacks and daylight, and cooler, harsher at night – though still a warmth from the family home. Though sadly not available on High Definition Blu-ray media (though is from digital outlets like iTunes and VUDU), the DVD looks very good (when up-converted on my 72 inch DLP).

Altered Minds comes with an English 5.1 Surround audio, driven by a brooding ambience and a mostly understated score but at times emotionally resonant score by Edmund Choi that serves the material very well. The audio makes use of the 5.1 spread and is immersive, helping bring the audience into the intimate home setting, with LFE rumbles and cold sweeping winter winds that help establish a sense of isolation and fear.

Deleted Theatrical Scenes: There are nine deleted scenes (running just over 20 minutes), including an alternate edit of the film’s closing. There’s more of C.S. Lee here (where he continues to show off his talent), and also included are scenes with two other, much younger adopted children (Sylvia and Sasha), that were not featured in the theatrical cut. Director Michael Z. Wechsler introduces one of these scenes. The actors playing these children are very good in their scenes.

Two Audio Commentary tracks with Director Michael Z. Wechsler and Composer Edmund Choi: The two audio commentary tracks, one providing behind-the-scenes, and then another covering the production. These are interesting audio commentaries which director Michael Wechsler keeps lively with humor and plenty of background anecdotes. Choi asks questions of the director to delve behind the scenes which helps expand the nature of what is shared. The audio from the film itself is a little louder underneath the commentary track than I’m used to hearing.

As a lifelong fan of film scores (and a fan of the score for Altered Minds – I would love for someone to release it), Edmund Choi’s contributions talking about the score and how he worked from the temp track (and veered far away from that temp track) to create his sound for the film – particularly providing a deeper emotion for the film – were very insightful.

Director’s Video Logs from per-production and table reads through every shooting day and post-production: Featuring an introduction by the director setting context, this collection of ‘vlogs’ shot by the director are broken into ‘Rehearsals’ on set, and ‘Screenings. It’s raw but it’s intriguing. The ‘screenings’ section shares the director’s snapped footage from the first assembled cut, then screenings in NY, – again, this is raw and unedited.  There’s also a little footage of the composer discussing capturing playing the violin.

Having interviewed director Michael Z. Wechsler about the making of this film in November of last year, long before I had the chance to see the film, I was anxious about watching the film to review. If I did not care for the film, I would have said that (of course), but I would have felt bad for not liking the work of someone who so clearly worked like a dog to make it happen. The relief, then, when I sat down one Saturday night to watch the film with my wife (Saturday night is our movie night) and found myself pulled in quickly to the mystery. I’d pieced together bits here and there about what the film was building to, but not everything, and was pleased by the dramatic, rather than the sensational focus of the reveal.

A very good, tightly produced film with a story that allows the tension to builds naturally, and uncomfortably at times. Altered Minds comes recommended. 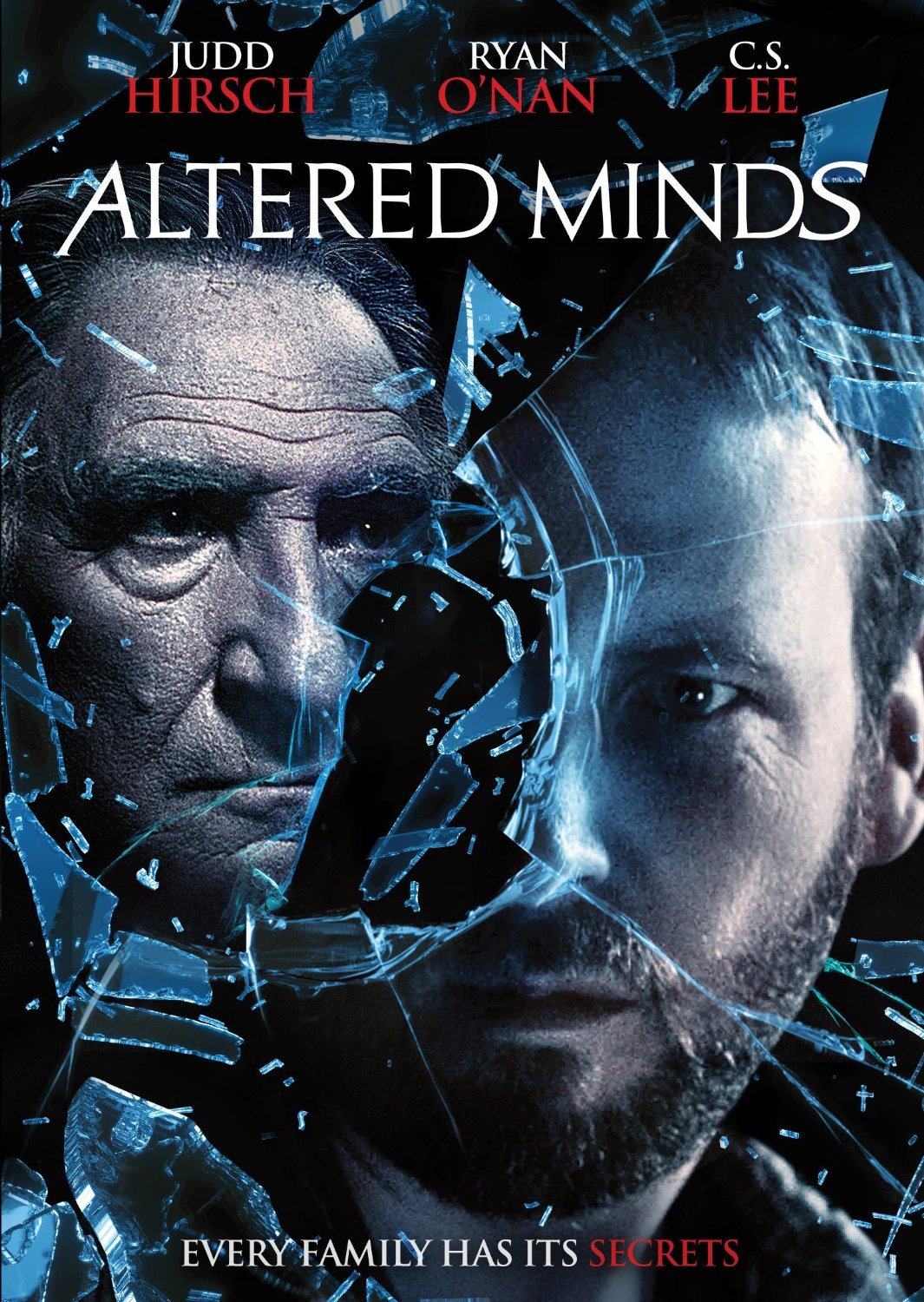