Forum List What's new Dark Style Change width
Log in Register
What's new Search
Menu
Log in
Register
Navigation
Install the app
More options
Dark Style
Close Menu
Posted on February 3, 2018 by Matt Hough
You are using an out of date browser. It may not display this or other websites correctly.
You should upgrade or use an alternative browser.
Entertaining comic western 3.5 Stars

A case of mistaken identity fuels the comedy hijinks in Stuart Heisler’s comic adventure Along Came Jones. With typically charismatic performances from stars Gary Cooper and Loretta Young offsetting the rather lackluster production values of the enterprise, Along Came Jones ambles along its amiable way with only a few stumbles here and there.

Wanted for the robbery of a payroll and the murder of a stagecoach driver, notorious bandit and gunslinger Monte Jarrad (Dan Duryea) is injured making his escape and is hiding out at his sweetheart Cherry De Longpre’s (Loretta Young) ranch. Ambling into the quiet town of Paynesville, bronco buster Melody Jones (Gary Cooper) is mistaken for Jarrad due to their similar physiques and the MJ monogram on his saddlebags. Melody enjoys the respect the misidentification generates for him as everyone in town is reluctant to cross him in any way, but he has no idea there is a $1,000 price on Jarrad’s head until he’s informed of it by the pretty Cherry. But Cherry has an ulterior motive for being nice to Melody. By convincing him to continue the charade that he’s Jarrad, she hopes to buy time for her lover to escape in the opposite direction than she sends Melody and his buddy George (William Demarest). But Melody has taken a shine to Cherry himself and is in no hurry to leave the area thus thwarting her plans.

Screenwriter Nunnally Johnson actually gets above-the-title billing for his script adapted from the novel by Alan LeMay, something unusual to see in this particular era of moviemaking. It’s a gently comic affair with star Gary Cooper playing against type as a butterfingered gunman who’s not the most quick-witted of comrades (though he does eventually figure out how he’s being used and turns the tables on his female object of delight). Cooper produced the film himself, the second of his films he independently collated for International Pictures hoping to keep a bigger portion of the take after his studio contract years, but it didn’t take him long to get back into the studio fold (his box-office ranking for 1945, 6th, was the lowest he had placed so far during the 1940s). The film’s production values are pretty limp by the standards of the era. Back projection is obvious throughout, and some outdoor sets, particularly Cherry’s ranch and a hideout, have clearly been constructed indoors while Stuart Heisler’s direction, like his star, ambles along rather than galloping making the ninety-minute running time sometimes seem like it’s crawling by. The ending is pretty far-fetched, too, with inept shooter Melody allowing himself to be filled with lead by sharpshooter Jarrad who somehow manages to miss all the vital organs and the major blood vessels before things have a way of working out. What appears to be a tragic ending ends up being about as sunny as they come.

Gary Cooper is obviously enjoying being something of a klutz during the movie and satirizing his laconic “yep” and “nope” persona when he takes on the guise of the nasty gunfighter. He and William Demarest have a wonderfully amusing chemistry as bronco-busting partners, and Demarest’s feisty personality brings some welcome comic relief to some otherwise tired western motifs. Loretta Young makes a fetching cowgirl throughout, very understandably the object of the affections of several of the principal characters. Dan Duryea is appropriately nasty and threatening as the wanted Jarrad, and Don Costello is equally slimy as his cohort Leo Gledhill. Willard Robertson makes a solid impression of two-faced treachery as an express company executive who wants the stolen money for himself, and Frank Sully as Cherry’s brother and Russell Simpson as her grizzled father also add to the general spirit of the movie.

The film’s 1.37:1 original theatrical aspect ratio is faithfully rendered in 1080p resolution using the AVC codec. The restoration of the available elements has generated a well above average result with image quality nicely detailed and with only a few noticeably remaining artifacts. There are still random black scratches here and there, some spotting, and occasional image softness (some of that is glamour photography for the leading lady). The image sometimes may appear to be slightly darker than it should be, but black levels overall are very good with no noticeable crushing in shadows, and the whites are crisp and bright. The movie has been divided into 20 chapters.

The DTS-HD Master Audio 2.0 mono track is very typical of its era. The dialogue has been well recorded and has been blended seamlessly with Arthur Lange’s background score and the atmospheric effects appropriate to the genre. There is some soft hiss which can be heard in quieter moments, and an occasional pop is also noticeable, but those problems don’t interfere with one’s aural enjoyment of the movie.

Restoration Comparison (4:08, HD): split screens show some of the serious image problems which have been corrected in this outstanding restoration.

Along Came Jones is an enjoyable western comic adventure with Gary Cooper playing against type as a good-natured but inept cowhand. Fans of the stars or Golden Age films will likely get a tremendous charge out of seeing this movie looking and sounding as good as it’s ever likely to get, all thanks to the dedicated efforts of Classic Flix. 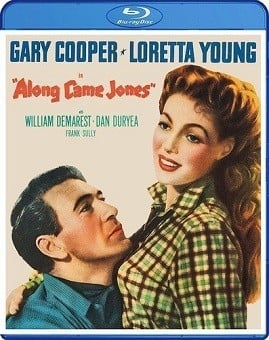