Change of pace for Zemeckis 4 Stars

Allied, from director Robert Zemeckis (The Walk, Back to the Future), is three movies in one; a love story, a war drama, and an espionage thriller. It is a film with excellent performances, including Brad Pitt, Marion Cotillard, and Jared Harris, but as a film it never quite lifts itself from being “good” to achieving any level of greatness, something one often expects from Zemeckis.

In 1942, Canadian intelligence officer Max Vatan (Brad Pitt) is parachuted into the desert of French Morocco (in one of the many seamless visual effects sequences in the film). His mission is to meet up with a member of the French Resistance, Marianne Beausejour (Marion Cotillard), pose as husband and wife in order to get invited to a party at the German Ambassador’s home, and ordered to assassinate him. While preparing for the mission, they fall in love, and as they make their escape, Max asks Marianne to join him in London as his real wife. After their marriage is cleared by Canadian Intelligence, they have a daughter. Shortly after this, Max is given the bad news that Marianne may or may not be a Nazi spy, and is ordered to conduct a “blue dye” test, essentially provide Marianne with false information that only Max and his superiors are privy to, and see if it falls into enemy hands. If so, Max has been ordered to eliminate his wife.

Allied is a throwback to the types of war movies Hollywood used to make in the 1940s, and is definitely an homage to the classic Casablanca, not only sharing similar backdrops, but also in its ultimately doomed love story starring two very talented and attractive stars. Pitt and Cotillard have a definite chemistry together, where you believe that not only are they dedicated to their craft, but so are their characters. The screenplay by Steven Knight (Amazing Grace, Dirty Pretty Things, Peaky Blinders) manages to keep the audience guessing throughout as to whether Marianne is a Nazi spy or not without being too over the top unbelievable or confusing. Robert Zemeckis has directed some of the best comedic fantasies of all time (Back to the Future, Who Framed Roger Rabbit, Death Becomes Her, Romancing the Stone) and recent dramas (Flight, The Walk), showing he’s a master at melding modern technological breakthroughs in visual effects with storytelling, and does so with Allied almost effortlessly. The opening shot of Max parachuting and landing in the African desert in what appears to be a single camera take, the chaotic evacuation of a military hospital in the middle of London as Marianne gives birth to her daughter, the air raid outside their home during a dinner party, even the lovemaking sequence inside a car during a sandstorm are perfect examples of Zemeckis’ genius. This all comes together masterfully, but the end result does not quite live up to what one typically expects from a film by Robert Zemeckis, as I expected much more from the film. Allied is a good ride, but in the end leaves you scratching your head, asking yourself “That’s it?”

Allied was captured at 6K and 8K resolutions with the Red Weapon Dragon camera, and completed as a 4K digital intermediate. Paramount’s 2160p transfer, graded using high dynamic range, retains the film’s theatrical aspect ratio of 2.40:1, and looks spectacular. Fine detail is extraordinary, particularly in the grains of sand in the opening desert sequence, but also in the textures of the stone buildings and dirt roads in Casablanca, facial features (age lines on Brad Pitt, for example), wood grain in the telephone booth, etc. Contrast is much more refined here, with deeper blacks that retain shadow details and brighter whites that don’t appear washed out. Colors are more natural, with more noticeable gradations in tones than on the included Blu-ray. This is an exceptional transfer.

Audio is the same DTS-HD Master Audio 5.1 track as found on the included Blu-ray. This is a very good track, with exceptional sonic clarity. Dialogue is well-defined and understandable throughout, directed mostly to the center channel with some occasional panning where necessary. Surrounds and LFE range from subtle during many of the quieter passages with mostly atmospheric effects to highly active during some of the key action set pieces, with bullets flying from front to back and vice versa, etc.

The Story of “Allied” (1080p; 5:13): A look at how a “true” story inspired Steven Knight to wright the screenplay, how Robert Zemeckis became involved in the project, etc.

From Stages to the Sahara: The Production Design of “Allied” (1080p; 10:10): As one would guess, this featurette takes a look at the film’s production design.

Through the Lens: Directing with Robert Zemeckis (1080p; 8:49): The cast and crew discuss working with Zemeckis.

A Stitch in Time: The Costumes of “Allied” (1080p; 8:40): Joanna Johnston discusses her costume designs for the film.

Lights, Pixels, ACTION! The Visual Effects of “Allied” (1080p; 9:33): A look at how much of what is seen on the screen is real and how much is created digitally.

That Swingin’ Sound: The Music of “Allied” (1080p; 7:06): Composer Alan Sylvestri and Robert Zemeckis discuss their long history of collaboration and the choices made, musically, for the film.

An interesting change of pace for director Robert Zemeckis, Allied wants to achieve greatness but only manages to succeed with being a good movie, despite everything operating smoothly. True 4K video that is nearly reference quality is the main reason to choose this over the Blu-ray. 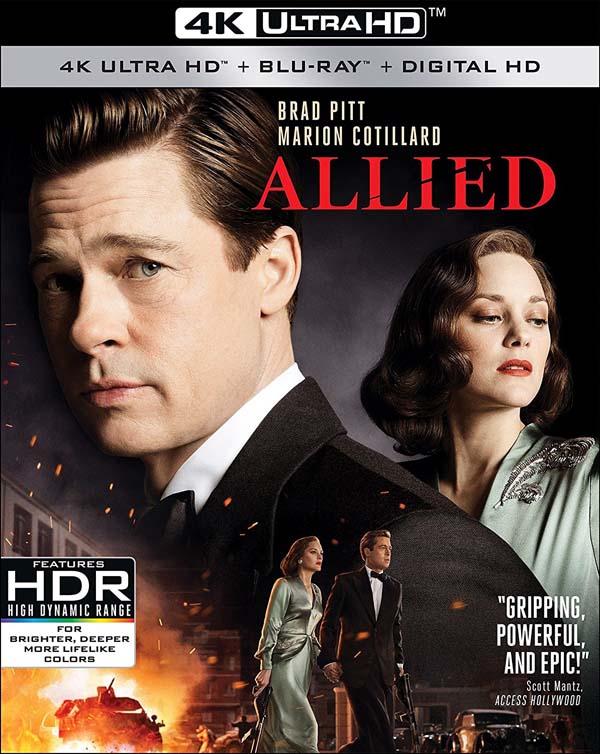