Forum List What's new Dark Style Change width
Log in Register
What's new Search
Menu
Log in
Register
Navigation
Install the app
More options
Dark Style
Close Menu
Posted on September 12, 2016 by Matt Hough
You are using an out of date browser. It may not display this or other websites correctly.
You should upgrade or use an alternative browser.
One of the great science fiction horror films 4.5 Stars

In the world of cinematic sequels, there are only a few that either equaled or surpassed their original films: The Godfather Part II, The Empire Strikes Back, Toy Story 2 are among the chosen few and added to that list must be James Cameron’s Aliens.

In the world of cinematic sequels, there are only a few that either equaled or surpassed their original films: The Godfather Part II, The Empire Strikes Back, Toy Story 2 are among the chosen few and added to that list must be James Cameron’s Aliens. Perhaps not as startlingly fresh as Ridley Scott’s original sci-fi horror show, Aliens, like its predecessor, builds its tension over a lengthy set-up period and then goes for the jugular never letting go until the final credits begin to crawl up the screen. By then, first-timers may have done some of their own crawling: under their seats or into the laps of a loved one for this is a first-class scare picture with interesting characters and unexpected twists and turns. Even on repeated viewings, one can’t help but admire Cameron’s expertise in building tension and paying it off only to start again with fresh thrills and chills.

After floating in hypersleep for fifty-seven years, Ripley’s (Sigourney Weaver) shuttle craft is brought in and her horrifying story received by a skeptical and ungrateful company. It seems that a human colony has been living undisturbed on that very alien planetoid for years with no problems, but when communications stop from that outpost, the company, fearing the worst, sends in a Marine unit to investigate. Ripley grudgingly goes along for two reasons: to regain her reputation and rank as a shuttle pilot and to end hopefully the disturbing nightmares about the creatures she experiences nightly. On the planet, only one survivor is found, the young child Rebecca “Newt” Jorden (Carrie Henn), and the alien population has expanded by dozens. Ripley also realizes once she arrives that once again there’s a mole in the operation, a person who will do anything to bring back to Earth a specimen of this life form.

Just as Ridley Scott did before him, writer-director James Cameron takes the slow-build-to-a-gut wrenching-experience tact for his movie, a full hour with only a disturbing nightmare and a couple of live face-huggers to get the juices flowing in the viewer before the war begins to be waged. There is the usual quota of gung-ho twaddle from the Marines (Bill Paxton is a standout alternately bragging and whining about his plight), and they make the usual mistake of thinking their big guns are all they need to insure victory not believing in the strength and intelligent planning the creatures are capable of despite Ripley’s warnings. But in Cameron’s masterful screenplay, the film revolves around a succession of beautifully set-up suspense sequences which will have a viewer on the edge of his seat even if he’s previously seen the film in theaters or in one of its previous video releases. The initial reveal of the creatures is one of the greatest shocks in screen history, and the sequence where Ripley and Newt are almost defenseless in a sealed room with two face-huggers on the loose is a continual source of gasps and thrills. The ultimate face-off between two queen bees, one human and one alien, is certainly memorable with the ebbs and flows of combat inherent in all such one-on-one battles, but by then we’ve long since surrendered to the movie’s relentless pace and non-stop surprises.

The movie is surprisingly rich in character, too. Not many science fiction horror films earn their leading lady an Oscar nomination for Best Actress, but Weaver nails it with an alternately tender and tough portrayal of a survivor that has stood the test of time. Paul Reiser’s accommodating, attractive company man Burke masks his devious intentions with a choir boy face and demeanor. William Hope is the green lieutenant who heads the operation, in way over his head in commanding men and combating such an overwhelming force. Bill Paxton steals all of his scenes as the alternately brash, scared, and determined leatherneck Hudson. Other standouts include Lance Henriksen as the android Bishop who doesn’t take Ripley’s disdain personally, Michael Biehn as the most level-headed of the Marines, and Jenette Goldstein playing Private Vasquez who’s the toughest of the grunts and proves it continually.

The film is framed at its theatrical aspect ratio of 1.85:1 and is presented in 1080p using the AVC codec. Heavily grainy on previous disc releases, the grain structure is still present but never at the expense of sharpness, detail, or color resolution. All are exemplary with terrific black levels and shadow detail second to none. The film has been divided into 32 chapters for the theatrical cut and 44 chapters for the extended edition.

The DTS-HD Master Audio 5.1 sound mix may not quite have the sophistication of today’s action soundtracks, but it still displays a wide range to its soundfield with explosive special audio effects and the James Horner score placed throughout the soundstage to very immersive effect. The subwoofer will get another heavy workout with the film. Dialogue has been well recorded and has been placed in the center channel.

Audio Commentary: an edited assemblage of talent before and behind the camera: director James Cameron, producer Gale Anne Hurd, effects artists Stan Winston, Robert Skotak, Dennis Skotak, and Pat McClung, and co-stars Michael Biehn, Bill Paxton, Lance Henriksen, Jenette Goldstein, Carrie Henn, and Christopher Henn. As with all of these edited tracks, prime information is provided with very little dead time, so fans will savor this if they haven’t heard it already.

Deleted Scenes (19:57, HD): sixteen scenes may be viewed separately or in montage.

Introduction to the 1991 Special Edition (0:37): James Cameron speaks about his pleasure in offering the cut he always wanted the film to be.

The MU-TH-UR interactive mode is a template which fits over the film and allows the viewer to select which audio (which keeps track of the topics being discussed at any one time by the variety of speakers) and video vignettes available for moments in the movie he’d like to store in the database for later use. There is also a datastream of trivia which can be turned on to run throughout the film.

Concept Art Booklet and Cards Set: enclosed in a separate envelope inside the slipcase.

The Inspiration of Aliens: a bonus featurette only available at FoxExtras.com with the enclosed code. The featurette would not open for review today; perhaps once the title goes live it will.

A great amalgamation of science fiction and horror that matches in scares and tension the original film, Aliens in this new edition is the same disc that was part of the previous Alien boxset (the disc even includes the BD-Live link which is now inactive, no great loss). Unless one wants the new concept art booklet and cards and the on-line featurette, there is no difference between this version of this great film and the previous release.

A nice review, but it should be said that Ridley does not appear in the film.

So the only new feature is just available at Fox's site? To Fox's credit, they did a GREAT job with the disc first time around.

ijthompson said:
A nice review, but it should be said that Ridley does not appear in the film.
Click to expand...

It just goes to show that no matter how many times you proofread something, there's always one little thing or another that will get past you. Thanks for the correction.

Well its not like they could have bettered the old disc. It was already a 4K transfer and the extras on Discs 5 and 6 were plentiful.

Wal*Mart had this for $9.96 which indicates it may be a price match

So it's not clear to me, is this the same or a different/better transfer than the existing BD?

Carlo Medina said:
So it's not clear to me, is this the same or a different/better transfer than the existing BD?
Click to expand...

It's the exact same disc that was previously released, along with new packaging and a coupon code to stream a new bonus feature online.

Carlo Medina said:
So it's not clear to me, is this the same or a different/better transfer than the existing BD?
Click to expand...

If I read correct, this is the same disc with Tschokes ...

Aliens in this new edition is the same disc that was part of the previous Alien boxset (the disc even includes the BD-Live link which is now inactive, no great loss). Unless one wants the new concept art booklet and cards and the on-line featurette, there is no difference between this version of this great film and the previous release. - See more at: http://www.hometheaterforum.com/aliens-30th-anniversary-edition
Click to expand... 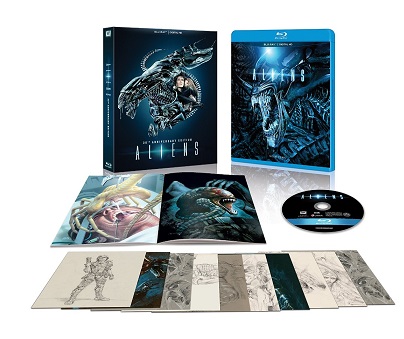