Woody Allen takes another stab at surreal character exploration with Alice, a sort of kissing cousin to the magical events that unfold in his masterpiece The Purple Rose of Cairo.

Woody Allen takes another stab at surreal character exploration with Alice, a sort of kissing cousin to the magical events that unfold in his masterpiece The Purple Rose of Cairo. Alice isn’t quite as accomplished with a more generic framework for his supernatural events, but it’s still wonderfully funny and involving and gives his then-muse Mia Farrow one of her best roles in one of his productions, a probing examination of a woman who at the same time has it all and has nothing.

A wealthy but bored Manhattan housewife Alice Tate (Mia Farrow) finds her affections shifting from her stockbroker husband (William Hurt) of sixteen years to saxophone player Joe Ruffalo (Joe Mantegna), a veritable stranger she meets at her children’s school, at the same time she begins experiencing back pains that drive her to visit Chinatown herbalist Dr. Yang (Keye Luke) seeking a cure for her backache. Perceptive to her real dilemma, Yang offers a series of magical herbal remedies that provides Alice the insight she needs to see her life more clearly and to begin making rational decisions that will bring her the fulfillment that all of her husband’s money and her own whims haven’t yet brought her.

Woody Allen’s screenplay for Alice, like Lewis Carroll’s adventures for his own similarly-named heroine, take Alice on a series of unusual and occasionally weird explorations which bit-by-bit reveal to her truths about her emotions, her fears, and her desires that she hadn’t bothered to stop to consider after so many years of living in the lap of luxury where she didn’t actually have to do anything with a nanny to raise her children, a cook to prepare meals for her family, a chauffeur to drive her wherever she wanted to go, and so on. Dr. Yang’s herbs make her alternately flirtatious, invisible, or able to conjure the spirits of dead ex-lover Eddie (Alec Baldwin), her muse (Bernadette Peters), and her deceased mother (Gwen Verdon), all of whom offer insights into her closed psyche. Eddie takes Alice on an exhilarating flight over Manhattan (director Allen obviously relishing presenting his beloved city from a breathtaking bird’s eye view), and we also get to view various other parts of the city including Chinatown, Madison Avenue, the zoo, and not only Alice and Doug’s palatial apartment but also Joe’s wonderfully atmospheric loft with a torrential rain pelting down on a huge skylight during Alice and Joe’s first time of true intimacy. Besides his usual satiric swipes at trendy Manhattan urbanites and gossipy women who promise their friends secrecy and then go blabbing to one and all, Woody Allen likewise uses Alice’s flights of fancy to recall old memories of younger, happier days before money and social status ossify spontaneity and adventurousness and to expound on the necessity of strong family bonds that aren’t as variable as the whims of romantic love. Of course, Allen gets in some hilarious sight gags, too. The coming and going of invisibility is nicely handled, Alice’s lighting of an herb that billows into a smothering cloud is hilarious, and a love potion accidentally administered at a party causes some very funny discomfort.

Mia Farrow won the National Board of Review Best Actress award for her work in this movie, and it’s certainly one of her strongest performances from wrestling with her conscience over her faithlessness to her surprising reactions to the various results from her magical herbs. The two men in her life – William Hurt and Joe Mantegna – both offer serviceable performances in fairly colorless roles, particularly Hurt’s Doug. Keye Luke is marvelous as the crotchety Dr. Wang who doesn’t suffer fools gladly, and it’s great to see Blythe Danner in a nice-sized role believably playing Alice’s older sister. Alec Baldwin has a showcase sequence as the sexy specter of Alice’s long-ago love Eddie, and Cybill Shepard gets a couple of scenes as a workaholic businesswoman who has no respect for Alice or her notions. Robin Bartlett is fine as the two-faced friend Nina, but wonderful actors like Bernadette Peters, Gwen Verdon, Judy Davis, and Bob Balaban don’t really get much time to show what they can do.

The film is presented in its theatrical aspect ratio of 1.85:1 and is offered in 1080p resolution using the AVC codec. The image is very warm and film-like throughout with a palpable grain structure that’s perfect for the movie, and colors that are beautifully controlled but also nicely saturated. Skin tones are particularly lifelike and appealing. Black levels are excellent. The movie has been divided into 24 chapters.

The DTS-HD Master Audio 2.0 mono sound mix is typical Woody Allen mono which fits the mood and spirit of the film perfectly. Dialogue has been well recorded, and it’s been mixed with various atmospheric effects and a selection of music standards (“Alice Blue Gown,” “Limehouse Blues,” “Moonglow,” among many others) to make a wonderfully involving aural presentation. There are no problems with age-related hiss, crackle, or flutter.

Six-Page Booklet: contains some color stills from the movie, original poster art on the back cover, and film historian Julie Kirgo’s entertaining analysis of the movie.

One of Woody Allen’s most enjoyable fantasy dramedies, Alice deserves to be much better known. With a sterling cast of actors and nuanced writing and direction, Alice is pure pleasure. There are only 3,000 copies of this Blu-ray available. Those interested in purchasing it should go to either www.twilighttimemovies.com or www.screenarchives.com to see if product is still in stock. Information about the movie can also be found via Facebook at www.facebook.com/twilighttimemovies.

Maybe if I saw the Blu-ray, it'd only moderately annoy me!
Expand signature
Colin Jacobson
http://www.dvdmg.com

This is one of Woody Allen's most engaging films. It and "Purple Rose of Cairo" are fantasies grounded in the real world. I really feel sorry for anyone who hated it or would be moderately annoyed by it, especially a movie lover. Mia Farrow turns in a wonderfully engaging portrayal of Alice and the film is both funny and very serious. It's a holiday treat that it was released this month, and I plan on enjoying many viewings on this superb BD presentation.
Reactions: plektret and Matt Hough
You must log in or register to reply here.
Share:
Facebook Twitter Reddit Pinterest Tumblr WhatsApp Email Link 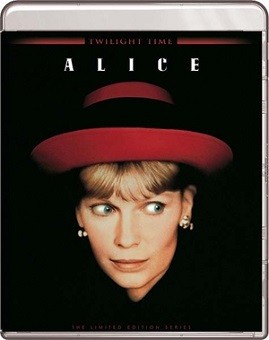