Sony’s 4K UHD Blu-ray release of Air Force One is a real winner, providing an excellent video and audio presentation.

After the US assists the former Soviet Union in capturing General Ivan Radek (Jurgen Prochnow), a dictator who has taken control of Kazakhstan, US President James Marshall (Harrison Ford) attends a dinner in his honor in Moscow. A small team of Radek sympathizers, lead by Ivan Korshunov (Gary Oldman), manage to sneak on board Air Force One, posing as Russian journalists, eventually hijacking the plane and taking the passengers hostage in exchange for the release of Radek. Assuming the President has fled the plane in his escape pod and most likely dead, Korshunov tries to negotiate over the phone with Vice President Kathryn Bennett (Glenn Close). Except that the United States does not negotiate with terrorists, and the President is pretending to be John McClane within the fuselage of Air Force One.

Air Force One is a fun, exciting popcorn action film written by Andrew Marlowe (Castle) and directed by Wolfgang Petersen (Das Boot, NeverEnding Story, In the Line of Fire) with a strong sense of patriotism (thanks mostly to Jerry Goldsmith’s last-minute score) and a seemingly never-aging Harrison Ford thwarting the terrorists. The supporting cast almost reads like a who’s who of top character actors, including William H. Macy, Dean Stockwell, Tom Everett, Elya Baskin, Bill Smitrovich, Phillip Baker Hall, Spencer Garrett, Elya Baskin, Xander Berkeley, and Paul Guilfoyle. Marlowe’s script is at times implausible, often borrowing from other movies (the escape pod, for example, from Escape From New York), but Petersen keeps the action moving and Ford, who was 55 at the time the film was released, is as agile as Indiana Jones and Han Solo.

Sony has proven, yet again, that they really know how to consistently bring their catalog titles to the 4K UHD Blu-ray format with Air Force One. Photographed in Super 35mm by Michael Ballhaus (The Color of Money, Goodfellas) and completed on 35mm film, this is a true 4K presentation through and through. Thanks to the use of HDR10, the movie has never looked better, with deep blacks that really accentuate the opening covert mission in the dead of night, plus the myriad of darkened interiors of the plane with fine shadow details. Colors are much more vivid when compared to the 2009 Blu-ray release, although much of the film is bathed in browns and greys. Film grain is noticeable and organic, never distracting.

Sony’s new Dolby Atmos remix for Air Force One is outstanding, offering tighter bass response and a wider, more immersive sound field. Jerry Goldsmith’s score benefits greatly, swelling more often than not across, behind, and above you. The opening mission uses the heights to simulate paratroopers overhead, and placing various sounds throughout the film more precisely within the sound field. Dialogue is clear and understandable throughout. Oh, and yes, subtitles for when characters speak Russian are placed within the frame now.

Audio Commentary with Director Wolfgang Petersen: Available on both the UHD and Blu-ray discs, the track (ported from the original DVD release) is quite informative and is moderated by Michael Coleman.

Digital Copy: An insert contains a code to redeem a digital copy on Movies Anywhere. Apparently, Sony forgot to grant MA licenses for this film to both Google Play Movies and FandangoNow, since the movie is missing from my library on those two services. I did receive HD versions on Vudu, Microsoft Movies, and iTunes (although it may be 4K, since I only have iTunes on my Windows PC), and UHD on Amazon Prime.

Sony’s 4K UHD Blu-ray release of Air Force One is a real winner, providing an excellent video and audio presentation.

Thanks for the review, Todd. I picked this one up during all the Black Friday sales. I have not seen this film in a long time — rented it on DVD many years ago — so I’m looking forward to watching it again in 4K.
Expand signature
My DVD Collection

Watching it now.
It looks amazing.
One of the best looking 4Ks I’ve seen.
Even the old special affects look better.

The Atmos track is incredible.

One thing I’ve noticed different from the Superbit disc is the opening sound when the shell casings hit the floor it’s barely audible now.
On the SB DTS track it sounds like they are bouncing off the floor right in front of me very pronounced.

One more thing as an aside.
I just watched the Batman Nolan trilogy.
The imax sections look amazing but the rest not so much.
Dark and slightly muddy at times.
Too much dnr.
This movie is flawless compared to those 4K Batman discs.
Expand signature
facebook.com/whotony
S 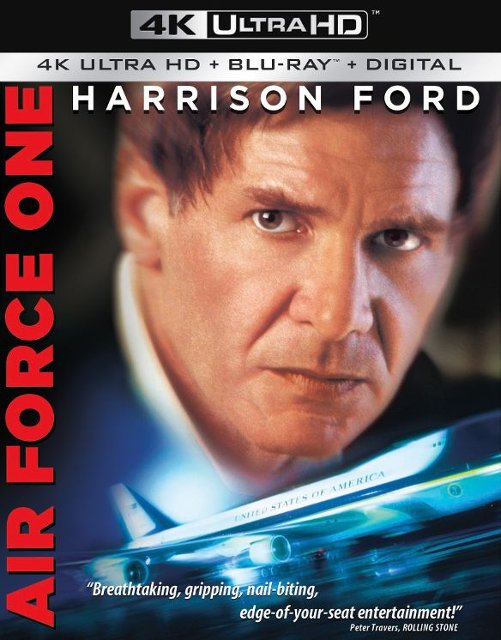