Indy Audio Labs of Indianapolis, responsible for high-end brands Acurus and Aragon, has announced that its top-of-class home theater pre-amp/processor ACT 4 will include up to 20 channels of immersive audio processing. The full price tag for the ACT 4 processor will retail for under $10k, the first of its kind (with so many channels) to reach this target price point.

For existing owners of the ACT 4, the 20-channel capability upgrade will be available via firmware update, with price yet to be determined, but as of April 2018, all new ACT 4s will be shipped with the new expanded channel capability. New units will natively decode Dolby Atmos 9.1.6 channel layouts with support for up to four more configurable channel outputs for systems with 9.5.6  or 9.7.4 channels.

The upgrade will also support Acurus’ proprietary automatic room correction tool, known as ASPEQT (Acurus Speaker Parameter EQ Tool), which is scheduled for a Spring 2018 rollout, and is slated to ‘dramatically simplify’ EQ and room tuning for immersive audio setups.

Inday Audio Labs Co-founder and CTO, Ted Moore says, “Acurus continues to remain first to market with the latest immersive cinema processor technology. We were the first sub-$10k wholly-designed American immersive audio processor, first with both 7.3.6 Dolby Atmos and 7.1.4 DTS:X native decoding, first with full support of HDMI 2.0b with HDCP 2.2, and now first to expand into the 20-channel realm with 15.1 Dolby Atmos native decoding plus four extra configurable channels.”

He continued, “Couple this layout expansion with the ACT 4’s superb implementation of the latest Dolby and DTS upmixers and you have a listening experience that’s as phenomenal as it is flexible.” 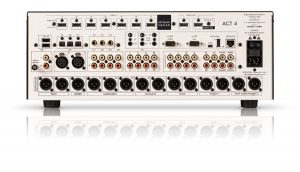 With recent strides being made in the further commoditization of DSP processing chips, and the emergence on the scene of processors with 9.1.6 channel capability, it’s good to see that some manufacturers are now expanding the architecture of their premium controllers, at least for customers who have the space for the added speaker count!

Wow! I wasn't aware Acurus ventured into this territory. I have used their 3x200 power amp for years and it's solid as a rock. Can't wait to hear more about this beast.

And it sounds fantastic, John. I got a demo of the prototype with founder Ted Moore. They're ambitious for such a small outfit and product is assembled on US soil, so I'm a big supporter. Wouldn't mind an ACT4 in the theater room either.
You must log in or register to reply here.
Share:
Facebook Twitter Reddit Pinterest Tumblr WhatsApp Email Link