Julie Taymor’s 1960s-era musical Across the Universe arrives on 4K UHD Blu-ray in a transfer very much worthy of its artistic beauty.

Most kids go through what my friends and I refer to as a Beatles phase as they near their teenage years discovering various forms of music. I went through this phase with many of my friends from age 11 to 13, and it didn’t help that my friend, Scott, had a rather large vinyl collection of Beatles albums, ranging from Meet the Beatles, A Hard Day’s Night, Revolver, Rubber Soul, The White Album, all the way to the Red and Blue greatest hits collections, plus the fact that Help! was in heavy rotation on the Afternoon Movie on WCAU-TV 10 in Philadelphia (in a very truncated form where the station omitted the middle reel so it could run in a 90 minute slot). This same group of friends also helped me with my early movies at that time, and I must confess, for many years, we had discussed, rather seriously, of making a movie and using the songs of the Beatles as the storyline. I eventually grew out of the movie idea shortly after Robert Stigwood produced Sgt. Pepper’s Lonely Hearts Club Band and was released in theaters in the summer of 1978.

One must wonder if the executives at Revolution Studios and Columbia Pictures remembered that disastrous film when Julie Taymor pitched her idea for Across the Universe, but I think that, if they did, they saw that this film was something entirely different. Yes, it was a musical, but in a more traditional sense (Sgt. Pepper was more along the lines of a rock opera than a standard musical), and the story and characters were much written with much broader strokes and the film would cover various songs from the entire Beatles library. And the film succeeds more than it fails.

Jude (Jim Sturgess) works in the shipyards of Liverpool with his single mom in the early 1960s. He enlists in the Merchant Navy and leaves ship when it docks in the US, and hitchhikes his way to Princeton University, where his father, whom he has never met, works for the maintenance crew. It is there that he meets Max (Joe Anderson), a prankster who eventually drops out of college hoping to bum around New York. Max invites Jude to his family’s home for Thanksgiving dinner, where he meets Lucy (Evan Rachel Wood), a high school senior who recently lost her boyfriend when he was killed while serving in Vietnam. Lucy joins Max and Jude in New York after she graduates, staying with them in an apartment they share with rock and blues singer Sadie (Dana Fuchs), her guitarist/boyfriend Jo-Jo (Martin Luther), and teenage runaway Prudence (T.V. Carpio). Max gets drafted to serve in Vietnam, Jude and Lucy fall in love, and Sadie signs a record deal without Jo-Jo. This is all set during the turbulent 1960s, including war protests, free love, and psychedelics, as the main characters evolve as the event unfold.

The main cast is excellent, but I do feel a bit sorry for T.V. Carpio, as I thought her character (but not her portrayal) of Prudence often felt like an afterthought, as she is strongly introduced (but with very little backstory) as a teenager singing a nice ballad arrangement of I Want To Hold Your Hand, but once she arrives in New York at Sadie’s apartment, her character is all but forgotten, except when she just shows up (like at Mr. Kite’s circus and Sadie’s rooftop concert) seemingly out of nowhere. The film also features some interesting and fun cameos by Joe Cocker (singing Come Together), Bono (singing I am the Walrus), Eddie Izzard (kind-of singing For the Benefit of Mr. Kite), and Salma Hayek (as a nurse at the VA). The musical numbers never feel forced and are well-staged and performed, with often eye-popping production and costume design (more on that below in the Video section). It’s a shame the film didn’t find enough of an audience during its theatrical run, but thanks to home video and cable, it found a cult following.

Across the Universe first appeared on 1080p Blu-ray nearly 10 years ago in what many thought, at the time, was an excellent transfer. It still stands up today, but Sony’s new 4K UHD Blu-ray release is an eye-popping feast thanks to the higher resolution (the film was completed back in 2007 as a 4K digital intermediate, according to IMDB) and the tasteful use of HDR10. As the film opens, one can easily see the additional clarity in the Columbia Pictures logo. Although the film quickly shifts to a very grey and almost monochrome Liverpool, we do get deeper contrast and incredibly fine detail, particularly in the steel beams that Jude is welding early on. It is not until the 29 minute mark (or so) that the wider color gamut comes into play as the bowling alley becomes a hallucinatory and psychedelic collage of purples, reds, greens, etc. This continues throughout the film, with reds benefitting the most, as they came very close to blooming and bleeding on the 1080p Blu-ray from 2008 (which is included in this set) and come nowhere near that on this new 2160p transfer. I know I keep saying this, but Sony is putting out some of the best looking catalog titles on the format.

As good as the Dolby TrueHD 5.1 track from the original Blu-ray release was, the new Dolby Atmos (Dolby TrueHD 7.1 compatible) mix blows that out of the water. I viewed the film in Atmos 5.1.2, and the additional heights were used quite extensively, with helicopters flying overhead and placing various instruments and chorus performances above you. As with most Atmos mixes, LFE has a much stronger presence, providing a nice low-end to much of the music as well as added kick to explosions and gunfire. Dialogue is strong and defined throughout, without getting drowned out by music and effects.

The UHD disc contains no extras whatsoever, and this may be the first Sony release not to have a Moments section as a so-called feature present on its menu. Sony has included the 2007 Blu-ray release, which contained over 2 hours of materials.

All About the Music (1080i; 15:24): A look at how Taymor and Goldenthal re-arranged the many classic Beatles songs.

Extended Musical Performances (1080p; 34:54): The complete musical numbers from the film, before they were trimmed for the final cut of the film. Hold Me Tight, Come Together, I am the Walrus, Dear Prudence, Something, Oh! Darling, While My Guitar Gently Weeps, and Across the Universe/Helter Skelter.

Being For the Benefit of Mr. Kite (1080p; 5:42): Two alternate takes of Eddie Izzard’s performance of the song.

Don Nace Art Gallery (1080p): Artist Don Nace was hired to create the sketches and other artwork that were “drawn” by Jude in the film.

Digital Copy: An insert contains a code to redeem a digital copy of the film on UltraViolet or Movies Anywhere retail partners. I could not get my code to work on Vudu, but it did redeem on Movies Anywhere and indicated that it was a 4K code, but only viewable as HD on the Movies Anywhere site and app. I’m guessing Sony has not provided UHD streaming versions to any of the providers yet, as the film shows only as HD on Google Play Movies, Vudu, and Amazon Video.

Julie Taymor’s 1960s-era musical Across the Universe arrives on 4K UHD Blu-ray in a transfer very much worthy of its artistic beauty. 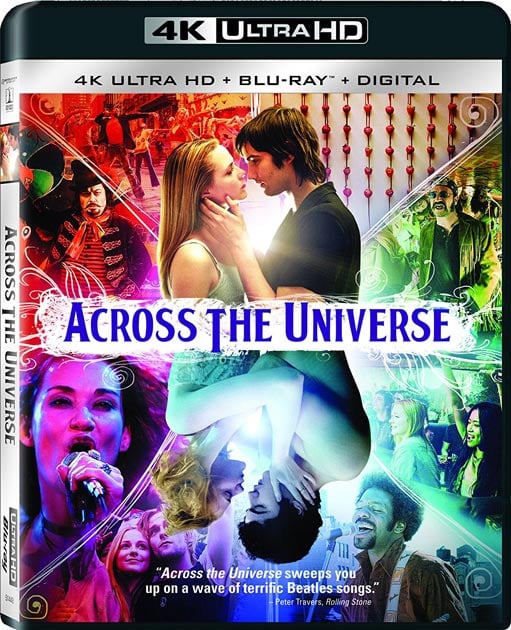