Forum List What's new Dark Style Change width
Log in Register
What's new Search
Menu
Log in
Register
Navigation
Install the app
More options
Dark Style
Close Menu
Posted on January 17, 2017 by Todd Erwin
You are using an out of date browser. It may not display this or other websites correctly.
You should upgrade or use an alternative browser.
Too many implausibles almost spoil the broth 3.5 Stars

The Accountant tries to tell an interesting story about a man with asperger’s syndrome (high-functioning autism) who is hired by drug cartels and crime syndicates to uncook their books and find missing money, and due to the high risks involved has also learned to be an expert assassin in order to protect himself. It’s an effective thriller with Ben Affleck in the title role, but there are too many implausible and predictable outcomes that almost spoil the fun of the movie.

The Accountant tries to tell an interesting story about a man with asperger’s syndrome (high-functioning autism) who is hired by drug cartels and crime syndicates to uncook their books and find missing money, and due to the high risks involved has also learned to be an expert assassin in order to protect himself. It’s an effective thriller with Ben Affleck in the title role, but there are too many implausible and predictable outcomes that almost spoil the fun of the movie.

Ben Affleck plays Christian Wolff, a genius at solving puzzles and math problems who was diagnosed with asperger’s syndrome as a child. His Army father, though, did not want to place Christian in a special needs home, and instead raised him with Christian’s younger brother as a single parent while travelling the world serving in the military. Christian’s ability as a mathematician has made him a successful accountant, hired by crime syndicates and drug cartels to find inconsistencies in their books and locate where money has gone missing and by whom. Hot on his trail is Treasury director Ray King (J.K. Simmons), who brings in a young analyst, Marybeth Medina (Cynthia Addai-Robinson), to help track him down. When he is hired to audit Living Robotics after their in-house accountant, Dana Cummings (Anna Kendrick), finds some discrepancies in their books, a hitman (Jon Bernthal) visits the company’s CFO Ed Chilton (Andy Umberger), taking him out by making it look like an insulin overdose. This prompts CEO Lamar Blackburn (John Lithgow) to call off the investigation and fire Christian before he uncovers who was embezzling the money. But Christian can’t not finish a puzzle, and continues digging on his own, putting both his life and Dana’s in jeopardy. And that is where The Accountant starts to teter off the tracks, with twists and turns that either make little to no sense or come so far out of left field that one will end up scratching one’s head over. It’s an entertaining film up to that point, and for me, did not completely derail the film, but it did have me say to myself “only in Hollywood.”

The Accountant was shot on 35mm film stock and completed as a 2K digital intermediate. For this release, the movie has been upscaled to 2160p and regraded using HDR. The result is a minimal upgrade over its 1080p Blu-ray counterpart. Contrast is slightly better with deeper blacks, colors are just a tad more natural, and fine detail appears a bit sharper. This is still a very good transfer, but so is the Blu-ray, so unless you are projecting this on a very large screen, most are not going to see much of a difference between the two.

The UHD disc contains the same 7.1 and 5.1 sound mixes, using DTS-HD Master Audio, as on the Blu-ray. I opted to listen to the 5.1 mix, since that is my basic set up here at home. Dialogue is strong, which is important since this is quite often a dialogue-driven film, and is always clear and understandable. Surrounds are used very effectively, placing discrete atmospheric sounds during the quieter moments and adding lots of gunplay during the key action sequences. LFE is used well to add emphasis to gunshots.

Inside the Man (1080p; 10:38): Rather bland look at the making of the film and in particular the character of Christian Wolff.

Behavioral Science (1080p; 8:04): A look at the research that went into the film to make the character of Christian believable.

The Accountant wants to be a good movie, and almost succeeds. The presentation is very good, but not quite enough to recommend it over the Blu-ray version, unless you plan on projecting it on a very large screen. The extras are a bit bland, not really going into much detail.

I watched the 4K/UHD disc this morning and then did some comparisons with the Blu-ray and I could see a major difference between the two discs on my LG OLED65E6P. Also, this is my second viewing of this film as I watched it during its theatrical run and like this film a lot more than you. This 2016 film was one of the most entertaining films for me personally this past year.
You must log in or register to reply here. 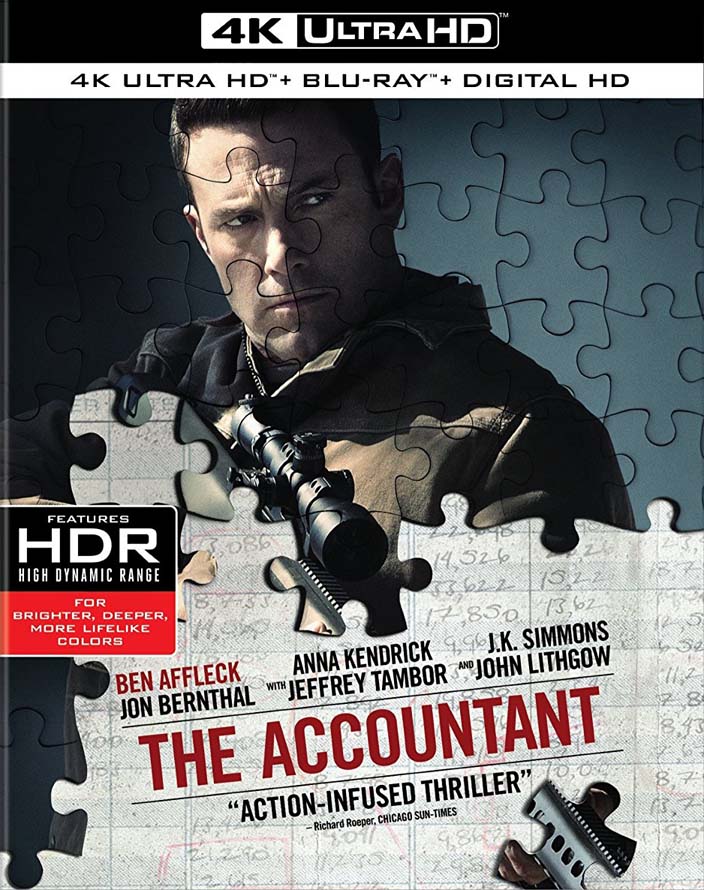