Forum List What's new Dark Style Change width
Log in Register
What's new Search
Menu
Log in
Register
Navigation
Install the app
More options
Dark Style
Close Menu
Posted on November 30, 2016 by Matt Hough
You are using an out of date browser. It may not display this or other websites correctly.
You should upgrade or use an alternative browser.
Sometimes too much of a good thing 3.5 Stars

There is a reason most television situation comedies don’t go the feature film route: often the eccentricities that seem so charming and funny on the small screen in half hour chunks get a bit overwhelming, predictable, and numbing when they assault an audience for an hour and a half. That’s certainly the case with Mandie Fletcher’s Absolutely Fabulous: The Movie.

There is a reason most television situation comedies don’t go the feature film route: often the eccentricities that seem so charming and funny on the small screen in half hour chunks get a bit overwhelming, predictable, and numbing when they assault an audience for an hour and a half. That’s certainly the case with Mandie Fletcher’s Absolutely Fabulous: The Movie. With much of the original television cast back for the film along with a long string of cameo stars from the world of movies, television, and fashion, Absolutely Fabulous The Movie delivers what its fans want to see, but it wears decidedly thin before it finally wraps up.

With her client list reduced to less-in-demand celebrities Lulu and Emma Bunton and her credit cards all maxed out, PR rep Edina “Eddy” Monsoon (Jennifer Saunders) knows she must find herself a new client who can put her back in the chips. When she hears that supermodel Kate Moss is seeking new representation, Eddy and always inebriated best friend Patsy Stone (Joanna Lumley) crash a press party in order to pitch to Kate Moss. Unfortunately, Eddy in her enthusiasm pushes Kate into the Thames where her body goes missing thus sending the entirety of Britain into a state of mourning and making Eddy and Patsy press pariahs. To escape angry fellow Britons from stoning them, Eddy and Patsy escape to Cannes where each of them has a get-rich-quick scheme lined up that will hopefully restore their bank accounts: Eddy reuniting with a former beau Charlie, a wealthy porno movie producer (Barry Humphries), and Patsy masquerading as a man to woo the oldest and wealthiest woman on the French Riviera Lubliana (Marcia Warren).

Star Jennifer Saunders’ screenplay touches on all the familiar bases from the original series with contentious relationships with her straight-laced daughter Saffy (Julia Sawalha), her mother (June Whitfield), and her rival PR nemesis Claudia Bing (Celia Imrie) along with various shenanigans concerning her daffy personal assistant Bubble (Jane Horrocks) who’s always game for anything. But there’s a very scattershot approach to the writing here as if Saunders is trying just about anything now that the budget allows them to leave studio sets and venture into real London and Nice locations. The settings are lush and impressively shot by director Mandie Fletcher, but we’re still left with the two aging divas (mostly unaware that they’re no longer a part of the hip, young crowd if they ever were) who stumble and bumble through their lives in an alcohol and drug-induced stupor most of the time insulting everyone, spending money they don’t have, and shrugging off their most outrageous behavior (including possibly committing two murders during the film) as so much bad luck that they shouldn’t have to pay for. Celebrity watchers will go mad trying to spot the famous faces, some who flash by in seconds-long shots (Joan Collins, Kim Kardashian, Bruno Tonioli, Jeremy Paxman, Perez Hilton) and others who are given a few lines to utter, often to great effect (Jon Hamm, Jerry Hall, Barry Humphries, Lulu, Graham Norton). Two of the funniest scenes do productively employ cameo performers. Eddy tries selling her memoirs to a book publisher (Mark Gatiss) who points out there’s nothing there of interest (bubble-headed Bubble had typed “blah, blah, blah” through much of the manuscript) while Eddy and Patsy must endure flying economy class with flight attendant Rebel Wilson doing her best to subdue their outrageous demands (at one point employing a stun gun which Patsy only finds gives her a minor buzz).

Stars Jennifer Saunders and Joanna Lumley fall right back into familiar and comfortable patterns as Eddy and Patsy, unquestionably descendants of Tallulah Bankhead in their outrageousness and continual reference to everyone as “darling.” Julia Sawalha is funny as the one voice of sanity in the crazed household with Robert Webb as boy friend Nick a welcome if underused presence. Jane Horrocks is outrageous as Bubble and June Whitfield drops a few precious one-liners as Mother. Celia Imrie playing Claudia gets some cutting digs at rival Eddy. Chris Colfer as Christopher has a couple of choice scenes as Eddy’s hairdresser and makeup man (who also gives a makeover to Eddy’s granddaughter Lola played by Indeyarna Donaldson-Holness). Kate Moss is a good sport throughout as the celebrity version of herself.

The film is presented in its theatrical 2.39:1 aspect ratio is a 1080p transfer using the AVC codec. Sharpness is outstanding (though it doesn’t always do the two stars any great favors who obviously don’t mind looking awful on frequent occasions), and color is bold and beautifully contained with vibrant skin tones. Black levels are first-rate, and contrast is consistently maintained throughout. The movie has been divided into 24 chapters.

The DTS-HD Master Audio 5.1 sound mix often stays disappointingly frontcentric only to surprise the listener with some wonderfully executed directionalized dialogue at a key moment. The pop songs and Jake Monaco’s background score do get routed to both the fronts and rears. The center channel contains most of the verbal byplay between the two stars and their interactions with the remainder of the cast.

Deleted Scenes (3:49, HD): a montage of deleted moments from the film has no chapter stops.

On the Set with Dame Edna (14:22, HD): Barry Humphries in his Dame Edna persona deigns for an interview about her scant participation in the film.

Fans of the frolicsome lushes Eddy and Patsy will likely adore Absolutely Fabulous: The Movie giving them three times the outrageousness as a typical episode of the television series. Others unacquainted with the ladies might want to rent or stream some of their earlier adventures before venturing into this feature film just to get an idea of what you’ll be facing. Outstanding video and audio quality makes the package one fans will likely relish.

Thanks. I must have heard it wrong during the film and just remembered it that way. I only have seen a couple of episodes of the series over the years.

FYI Saffy is short for Saffron as in Donovan's lyrics to Mellow Yellow (I'm sure I'm Quite Right! )


(or maybe I'm wrong)
You must log in or register to reply here. 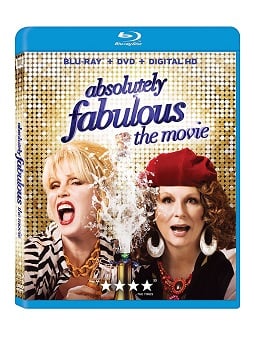