With a cast that boasts the likes of the usually reliably funny Simon Pegg, American comedian Rob Riggle, the voice of Robin Williams, and the surviving members of Monty Python, Terry Jones’ Absolutely Anything should have been a lot funnier and a great deal more intelligent than it ended up being.

With a cast that boasts the likes of the usually reliably funny Simon Pegg, American comedian Rob Riggle, the voice of Robin Williams, and the surviving members of Monty Python, Terry Jones’ Absolutely Anything should have been a lot funnier and a great deal more intelligent than it ended up being. This sci-fi romantic farce tries every possible sight gag and word play to generate gales of laughter, but most of it falls flat, and even the few visuals that are funny don’t manage to sustain the laughs for more than a few seconds. The entire notion of building and sustaining laughs seems as far away as the interplanetary aliens who are fiddling with Earth’s affairs that form the crux of the movie’s flimsy plot.

An interplanetary council of elders (CG aliens voiced by John Cleese, Terry Gilliam, Eric Idle, Michael Palin and Terry Jones) puts Earth to the test by selecting an individual at random from the planet in question and tests his morality by granting him the power to have absolutely anything with a wave of his hand. How the person uses the gift before the end of the time limit will determine whether his home planet remains viable and is invited to join the council or is destroyed. Ordinary school teacher Neil Clarke (Simon Pegg) is the person selected, and after realizing that a special ability has come onto him somehow, Neil begins a concerted effort to win the love of his life, his downstairs neighbor Catherine (Kate Beckinsale). But he must contend with the numerous mistakes he makes in uttering his wishes and he’s got a formidable enemy to watch out for: an egotistical, obsessed American officer (Rob Riggle) who won’t stop hounding Catherine until she agrees to be his.

Director Terry Jones has co-written the script for the film with Gavin Scott, but apart from some sight gags (the universe tends to take uttered wishes quite literally resulting in some amusing snafus), the movie doesn’t really amount to much. Typically, Neil’s wishes, apart from one wish to help his lovesick best friend Ray (Sanjeev Bhaskar), are pretty much self-directed for his own comforts and conveniences. It only occurs to him very late in the film that disease, war, hunger, climate issues, and homelessness could have been attended to (and the film’s way of dealing with the downsides of their solutions is very lame indeed), but by then, the movie’s ramshackle plot has pretty much grounded to a halt anyway. Jones directs the slapstick mayhem in rather standard fashion (can this be the same man who directed the brilliant satire Life of Brian?) and lets the CG creations (the aliens, Neil’s dog Dennis voiced by Robin Williams) attempt to do the heavy comic lifting, but the tense sense of urgency is never really ratcheted up (Neil doesn’t even know he’s being put to the test with mankind’s survival at stake) and the movie just seems to be spinning its wheels for most of its length.

Simon Pegg in the right vehicle can be hysterically funny (Hot Fuzz anyone?), but here his nebbishness is rather tiresome, and for a character who’s supposed to be an English teacher, his imprecise way with language that gets him into so much hot water doesn’t ring very true especially since he keeps making the same mistakes. Robin Williams’ ad-libs as Dennis the dog, pretty much his last professional work before his untimely passing, are adequate but no more. Apart from Sanjeev Bhaskar’s best friend Ray, Pegg’s Neil is pretty much surrounded by jerks: Kate Beckinsale isn’t much of a supportive girl friend regarding only her own misconstrued feelings and not seeing that Neil is struggling to handle his new gift properly. Neil’s headmaster is played by Eddie Izzard as a pompous ass not bothering to help Neil with the problem children in his classroom but simply standing above it all and casting aspersions until Neil’s powers transform him into a solicitous person. And Rob Riggle, of course, is the film’s villain, a conceited bully so cartoonish that even doors slammed in his face and a fractured leg won’t convince him that Beckinsale’s Catherine isn’t made for him and him alone (and the film’s climax where he makes Neil do his bidding at the risk of his shooting his dog Dennis is absurd: Neil could simply will Dennis back to life). Joanna Lumley is wasted as the peevishly malicious host of a book talk show that Catherine works for, and James Cleverill as the handsy producer with the hots for Catherine is yet another in the film’s long line of jerkwads.

The film’s 2.40 theatrical aspect ratio is faithfully rendered in this standard definition transfer that’s been anamorphically enhanced for widescreen televisions. On a good upconverting player, sharpness is first-rate and unusually for standard definition, there are no obvious video artifacts like aliasing or moiré patterns. Color is quite nicely controlled but rich and well saturated apart from occasional skin tones that vary from too pale to normal. The blacks of space blend seamlessly into the letterbox bars. The movie has been divided into 28 chapters.

The Dolby Digital 5.1 sound mix at its best uses the surround channels with surety with the background score and the atmospheric effects all sent to the fronts and rears as appropriate. Dialogue has been well recorded and has been placed in the center channel. The front soundstage gets more emphasis in this sci-fi mix than the surrounds do lessening the impact of some of the most outrageous visual effects.

Absolutely Anything is only an average sci-fi comic farce. The film’s lack of impact at the box-office is registered by its only being released on DVD on this side of the pond, but unless you have an aversion to standard definition, fans of the actors may want to consider a rental for this title which may even strike your funny bone more acutely than it did mine. 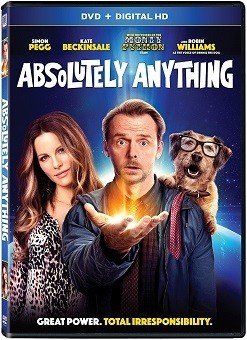