Posted on December 4, 2019 by Todd Erwin
Cute fun for the family 4 Stars

Dreamworks Animation’s Abominable is a warm-hearted, fun-filled adventure about a girl and her Yeti.

When a Yeti (vocalizations by Joseph Izzo) breaks free from a secured facility and takes up residence atop the apartment building where teenage Yi (Chloe Bennet) and her family and friends live, Yi sets out on an adventure to return the beast whom she names Everest back to his home. She is joined by neighbor kids Peng (Albert Tsai) and Jin (Tenzing Norgay Trainor) with wealthy entrepreneur Burnish (Eddie Izzard), zoologist Dr. Zara (Sarah Paulson), and a security team hot on their trail as they make their way across China. Yi is in desperate need of this trip, having never properly mourned the loss of her father, and it is the kids’ friendship with Everest and Yi rediscovering her musical talent with her father’s violin that bring Abominable to an enjoyable conclusion.

Chloe Bennet, best known to audiences as Daisy/Quake from Marvel’s Agents of S.H.I.E.L.D. television series, brings a lot of sass in her vocal performance of Yi, giving the character an independence and strength we don’t see all too often in animated features. Eddie Izzard has some funny lines as the eccentric Burnish, and the rest of the voice cast (which even includes a cameo by James Hong) provide very convincing vocal performances. The story is rather predictable and familiar (this is the third movie about a Yeti in just over a year), but co-directors Jill Culton (who also wrote the screenplay) and Todd Wilderman, with the assistance of their animation team, deliver some wonderful visuals and action set-pieces depicting beautiful parts of China. The overall design of Everest is somewhat disappointing, as if he was designed more as a toy stuffed animal than an actual animated character, although animators are able to convey a lot of emotion. Abominable is a fun and magical film that kids will enjoy and may warm the hearts of their parents, too.

Universal’s Blu-ray release of Abominable is nothing short of spectacular. The 1080p AVC-encoded transfer is gorgeous, with bright, bold, vivid colors that never appear overly saturated. Detail is phenomenal, from the individual strand of Everest’s fur, the buildup of moss on rocks, pebble debris in the streets, to the vast vistas of China’s countryside. Blacks are deep and inky with strong shadow detail, while whites are bright without clipping. There was no evidence of any compression or other artifacts whatsoever.

The Dolby Atmos track on Abominable is incredibly immersive. The sounds of both the city and countryside come alive where necessary, with sounds emanating with precision throughout the viewing area; helicopters and drones soar overhead, crowd noises surround you, and Rupert Gregson-Willams’ score wraps around the listener extending into the height speakers. LFE is strong, helping to emphasize Everest’s roars and footsteps. Dialogue is clear and understandable throughout.

Special Features will play automatically at the end of the feature or can be selected from the Bonus side menu.

Marooned (1080p; 7:24): A lonely robot on the Moon builds a rocket in the hopes of returning to Earth, finding a friend to help him in the process. This short played theatrically with Abominable.

Show & Tell (1080p; 2:50): Everest demonstrates the contents of a box he finds in the Himalayas to his family in the new hand-drawn animated short.

Making a Myth (1080p; 6:58): A very broad overview of the making of the film, centering more on story and characters.

Animating “Abominable” (1080p; 5:12): A look at the development if the characters and animation techniques.

Your Yeti Carte Guide (1080p; 2:28): Chloe Bennet, Albert Tsai and Tenzing Norgay Trainor offer up some helpful hints on how to care for your pet.

Everest’s Talk Box (1080p; 4:35): Writer/Director Jill Culton and Co-Director Todd Wilderman with help from Joseph Izzo demonstrate to a group of kids on how they came up with Everest’s voice.

Cooking with Nai Nai (1080p; 4:03): Tsai Chin, the voice of Nai Nai, with assistance from Chef Shirley, demonstrate to viewers how to make bao.

How to Draw (1080p; 20:36): Story Artist Daniel Tal shows the viewer how to draw some of the characters from the film, including Everest, Yi, Jin, Peng and Nai Nai.

Audio Commentary with Writer/Director Jill Culton, Co-Director Todd Wilderman, Producers Suzanne Buirgy and Peilin Chou, Head of Character Animation John Hill, Production Designer Max Boas and Visual Effects Supervisor Mark Edwards: What could have been a rather crowded commentary is actually a rather informative one in which all of the participants provide a lot of details about the production and speak from the opening Universal Pictures logo to the closing Pearl Studios logo.

DVD Copy: The movie in 480p and Dolby Digital 5.1 audio plus all of the special features listed above.

Abominable was something of a surprise for me, a film both my wife and I enjoyed tremendously. Universal’s presentation on Blu-ray is superb, and includes a wealth of special features. 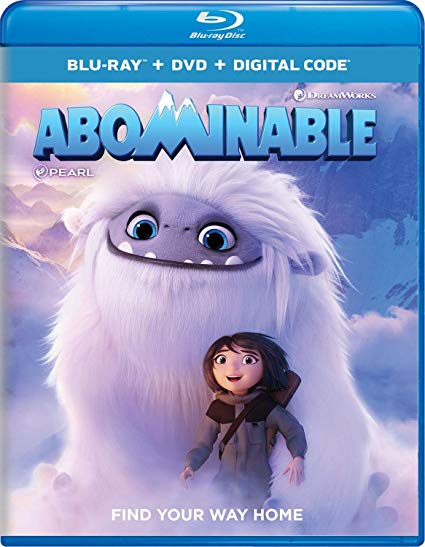