Forum List What's new Dark Style Change width
Log in Register
What's new Search
Menu
Log in
Register
Navigation
Install the app
More options
Dark Style
Close Menu
Posted on April 29, 2020 by Matt Hough
You are using an out of date browser. It may not display this or other websites correctly.
You should upgrade or use an alternative browser.
Faithful adaptation of a Broadway dramedy 4 Stars

Herb Gardner’s sweetly offbeat tribute to nonconformity comes vividly and quite faithfully to the screen in Fred Coe’s A Thousand Clowns.

Herb Gardner’s sweetly offbeat tribute to nonconformity comes vividly and quite faithfully to the screen in Fred Coe’s A Thousand Clowns. With several key members of its Broadway cast recreating their stage roles with some  other additions in other important parts, A Thousand Clowns plays even more effectively today with our more keenly celebrated championing of individuality and less rigidly defined family units giving the plot’s central conflict a real reason to draw and hold our attention. Kino Lorber has provided viewers with a clear, clean transfer of this 1965 comedy-drama.

“Middle-aged” twelve-year-old Nick (Barry Gordon) lives with his Uncle Murray Burns, a television comedy writer who has been out of work for five months.  School officials have alerted the Department of Social Services about a possible necessity of placing Nick with more suitable parental figures, and the two social workers (William Daniels, Barbara Harris) who arrive are not inclined to leave Nick where he is. Murray is also goaded by his agent-brother (Martin Balsam) to go back to work for both his and his nephew’s sake, but Murray is hesitant to buckle under the yoke of conformity even when he falls for the female social worker and she falls for him.

Herb Gardner has adapted his Broadway play for the screen condensing some of the lengthy speeches (it nevertheless still runs almost two hours) but opening up the single set dramedy to allow Murray, Nick, and social worker Sandy to tour actual New York City locations including the Statue of Liberty, Wall Street, Central Park, Lincoln Center (when parts of it were still under construction), the docks, and other notable haunts. Still, even with director Fred Coe’s several urban montages (a holiday lark with Murray and Nick, a love montage for Murray and Sandy on a bicycle-built-for-two, Murray’s search for legitimate employment), we spend most of our time in Murray’s one room apartment with all of the clever, pointed dialogue that is the play’s strong point. Yes, Gardner hasn’t gotten rid of the writery tendency for characters to continually address by name the people they’re talking to, but the focus on nonconformity and individuality is still front and center even if the play’s conclusion does sell out some of its point for the sake of love.

Jason Robards, Jr. reprises his Broadway role as the happy-go-lucky Murray Burns who comes crashing to Earth when the threat of losing his beloved nephew becomes too real. Having honed his performance on the stage over hundreds of performances, Robards is able to expand on his sense of irrepressible irresponsibility through the wider canvas of the screen, and he’s quite excellent without ever going overboard. Barry Gordon who had earned a Tony nomination for his stage performance likewise repeats as the precocious Nick, intelligent and grown-up far beyond his years who nonetheless succumbs to his real age when Uncle Murray begins to display traits he doesn’t think are worthy of him. Barbara Harris replaced the Tony-winning Sandy Dennis as social worker Sandy who falls long and hard (perhaps too quickly) for Murray and Nick, an instant family for her. She’s quirky and lovable in the role if lacking just the greater touch of poignancy that Dennis would have brought to the part. Martin Balsam won the Best Supporting Actor Oscar as Murray’s level-headed agent-brother Arnold who makes no apologies for playing the game of life conventionally, and Gene Saks is equally as good as the pathetically unfunny children’s TV host who depends on Murray’s idiosyncratic writing skills to give him a funny edge to his Chuckles the Chipmunk character. William Daniels is reliably amusing as the stuffy social worker who is appalled at his partner’s willingness to bend to this unconventional living situation, and that’s John McMartin in a tiny part of one of the men willing to give Murray a job.

The film has been framed at 1.66:1 and is presented in 1080p resolution using the AVC codec. At first, the transfer gives every indication of being somewhat of a disappointment with some debris and overtly coarse grain, but things normalize nicely and very quickly, and the picture becomes sharp and solid (excepting glamour close-up shots of Barbara Harris). The grayscale is excellent with rich black levels and crisp whites and with contrast wonderfully realized. The movie has been divided into 9 chapters.

The DTS-HD Master Audio 2.0 mono sound mix is quite typical of its era. Early in the film there seems to be some sibilance in dialogue stretches with a bit of harshness on the soundtrack but that disappears and the remainder of the track is clean and clear with no age-related problems with crackle, hiss, hum, or flutter. The Oscar-nominated music by Don Walker and the sound effects have been professionally mixed with the dialogue to produce the single track.

Diary of a Middle-Aged Kid (15:22, HD): a new interview with actor Barry Gordon recounting his early career and his memories of starring on the stage and later making the film of A Thousand Clowns.

Oscar nominated for Best Picture and Best Screenplay in 1965, A Thousand Clowns comes to Blu-ray in a lovely transfer with all of its comedy and drama intact, filled with rich performances and some memorable local photography of New York City in the mid-1960s. Recommended!

Saw this for the first time last year on a TCM broadcast and liked the film. Great performances by Jason Robards & Barry Gordon and already pre-ordered the Blu-ray.

Received the Blu-ray and played a few scenes and the transfer looks very good and a big improvement over the MGM channel broadcast. Would have been nice to have a commentary but happy Kino releasing this great film on disc.
You must log in or register to reply here. 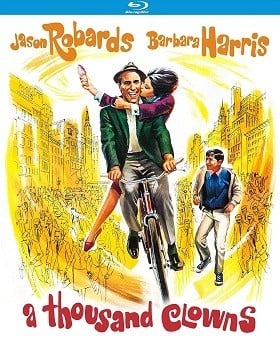