A Quiet Place is a serious, dramatically thrilling film that doesn’t disappoint. It quickly establishes its world, its rules, and the stakes, and carries the audience through a riveting and wholly original experience. This is a rare combination of unrelenting dramatic thrills and an intimate and well-crafted film. Original, beautifully made and performed, with a fascinating central premise and an emotionally resonant focus on family and parenting, A Quiet Place is one of the best films I have seen in several years, and one that won’t soon be forgotten.

Sightless, vicious creatures who hunt using their remarkable sense of sound detection, have decimated the world’s population. One family, the Abbotts, have adapted to the silent life, scouring abandoned shops for supplies, living on a farm, following a routine, and communicating using sign language. A tragedy after one of their supply runs affects the family deeply, in ways that manifest deeply as the unrelenting creatures close in.

A Quiet Place is a superbly crafted thriller, anchored in family dynamics, centered on characters dealing with threats and their internal ramifications. At its heart, it is a meditation on familial grief masquerading as a horror film. In ways that echo Craig T. Nelson and JoBeth Williams as Steve and Diane Freeling in 1982’s Poltergeist, A Quiet Place explores the stresses, drama and psychological damages of the sustained, terrifying threat and the ways in which a family tries to survive against the impossible.

John Krasinski is a revelation in every capacity here. As the film’s director, producer, co-writer and one of the leads, he demonstrates an unassailable grasp of the film he is making. His confidence and certainty in storytelling is key to the film’s success and is a wonderful example of a burgeoning filmmaker’s artisanship. There may be a moment or two to be found that stretch credulity, but those are easily forgivable, debatable even, amongst the accomplishments of the film.

The small cast, with Krasinski and real-life wife Emily Blunt portraying the Abbotts, parents surviving in the changed world while raising their two surviving children, is flawless. Krasinski, perhaps best known for his role as Jim in the American adaptation of The Office, has a gift of comedic timing, but it has been his dramatic turns where he has most impressed. He was the best thing about Michael Bay’s mixed bag of a film, 13 Hours: The Secret Soldiers of Benghazi, where he showed off a muscular, grounded and gritty side to his potential. As the driving creative force behind A Quiet Place, he demonstrates a continuing dramatic evolution. His family-focused, serious-minded character quickly engenders a sense of trust with glances, expressions that carry sadness in his eyes and regret and fear in his weary smiles. It’s a brilliant performance matched by the masterful talents of Emily Blunt. Blunt’s performance is equally compelling as she delivers an authentic hybrid of strength and vulnerability, capturing an extreme variation of the kind of inherent protective, loving nature I see in every parent I know.  Millicent Simmonds as Regan, is quite something. Deaf since infancy, Millicent’s Regan is arguably the reason the family is still alive, having learned American Sign Language to communicate with their daughter (presumably long before the monster threat arrived). Regan’s inability to hear raises the level of threat against her, and her journey through the film produces perhaps the most emotionally potent arc, and through it all, Simmonds captivating. Noah Jupe portrays Marcus, the uncertain, fearful young boy who must grapple with both the terrifying creature threat, and the protective rules set by his parents. Jupe and Simmonds deliver authenticity in their fear, making tense moments even more intense. They are both superb. The film has just one other actor in the film, a man who appears very briefly playing an unnamed character in a pivotal scene that I won’t spoil, but I will say that it’s a magnificent scene and the talented character actor who pulls it off, Leon Russom, owns the scene.

Creating a film where silence is dominant was a bold endeavor. Fortunately, audiences were rapt by the film and, by all accounts, respected the silent theaters. It’s an atmospheric masterpiece, building a defined world, contained and real, and an intense atmosphere that is as much thrilling as terrifying. Billed as a horror film, I suppose it is, but it best succeeds when viewed as a thriller, with elements of Hitchcock woven to ramp up the tension the audience experiences when they know something the characters don’t (classic Hitchcock). It is a relentless experience, placing characters in danger, and building upon that danger with new layers of threats. It pulls the threads of tension, upping consequences, and pulling us in, inch by inch, into the frames of the film.

Paramount brings A Quiet Place to UHD with stunning quality. The film contains excellent cinematography, with bold late summer, early autumn saturated colors that give the film a very warm, brighter than expected tone. Shot on film and presented at 2.40: aspect ratio, this is a great looking film.

The image is highly textured, with even grain, rich colors, excellent black levels, highly resolved shadow detail, and showcasing fabric, fibers, hair and skin both incredibly detailed and natural–run warm by design. The Dolby Vision (and HDR10) grading pushes the saturation of colors even deeper and provides a very noticeable increase in black levels detail at times. UHD is definitely the way to go.

The Dolby Atmos audio, which works as Dolby TrueHD 7.1 for those not yet height equipped with their set up, is deliciously spare, using sound intelligently, and forcefully at times. This is Sound design that simply must be the front-runner for the Academy Award, and Marco Beltrami’s surgical use of composition is brilliant as much as when it is absent as when it is used.

Subtle sounds, shuffling around rooms, feet on sound-diffusing materials as characters walk around, breaths and other sounds we make even when we are trying to be as quiet as possible, make up a good portion of what we hear. However, when the characters make a mistake, or the creatures come into play, the sound effects wrap around us and drag us into the action. Music becomes fiercer, the sub-woofer is leaned upon heavily, fear becomes palpable and audible, and the screeches of the creatures impactful.

The UHD disc contains no special features, but three short bonus features can be found on the accompanying Blu-ray. At under 35 minutes, the amount of special features is disappointing, and what is sorely missing here is a commentary track from Krasinski, who would have been fascinating to hear from as he approached the film’s intriguing premise, and his first horror film. The brief extra on the sound editing is interesting, but lacks the kind of depth that would have really examined this film’s strengths and originality.

A Quiet Place is a serious, dramatically thrilling film that doesn’t disappoint. It quickly establishes its world, its rules, and the stakes, and carries the audience through a riveting and wholly original experience. This is a rare combination of unrelenting dramatic thrills and an intimate and well-crafted film. Original, beautifully made and performed, with a fascinating central premise and an emotionally resonant focus on family and parenting, A Quiet Place is one of the best films I have seen in several years, and one that won’t soon be forgotten. 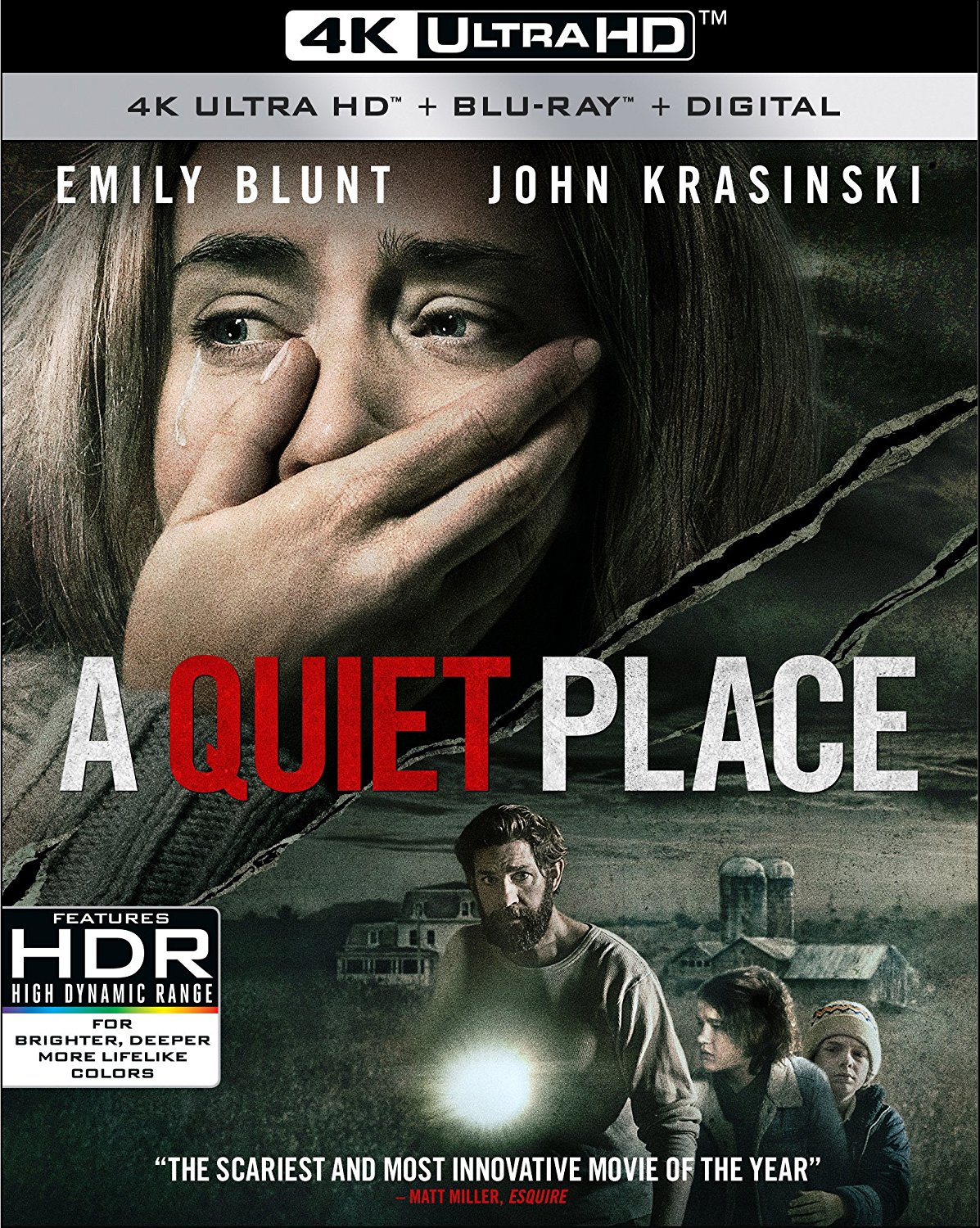