Forum List What's new Dark Style Change width
Log in Register
What's new Search
Menu
Log in
Register
Navigation
Install the app
More options
Dark Style
Close Menu
Posted on December 25, 2020 by Matt Hough
You are using an out of date browser. It may not display this or other websites correctly.
You should upgrade or use an alternative browser.
Marx Brothers comedy is more enjoyable than its reputation suggests. 3.5 Stars

Archie Mayo’s A Night in Casablanca certainly won’t rank alongside Duck Soup, Horse Feathers, or A Night at the Opera, but any occasion to spend time with the Marx Brothers is time well spent.

After five years away from movie screens after their retirement following the end of their MGM contract with their last film The Big Store, the Marx Brothers returned with an independently produced comedy A Night in Casablanca. Intended originally to be a satire of Warner Bros.’ Oscar-winner Casablanca, the film instead took the setting only and spun out its own yarn of Nazis and the search for stolen treasure abetted with the patented craziness that only the Marx Brothers could supply. Never considered one of their great films, the movie is funnier and more inspired than its reputation would suggest, and each of the boys gets his moment in the spotlight as one delights in seeing them again despite their advancing ages.

Allied pilot Lt. Pierre Delmar (Charles Drake) as a prisoner of war had been forced by the Nazis near the end of World War II to fly a plane loaded with gold, jewels, and priceless artworks to South America, but he deliberately crashed the plane in Casablanca where the treasure instantly vanished. Reportedly stashed somewhere in the Hotel Casablanca, its most recent three managers have all been mysteriously murdered allegedly by disguised Nazis trying to gain control of the hotel so they can search for and find the loot and make off with it. Governor Galoux (Lewis Russell) and the police prefect Captain Brizzard (Dan Seymour) decide to hire noted hotel proprietor Ronald Kornblow (Groucho Marx) and plan to keep an eye on him to see who might attempt to murder him and thus catch the Nazis red-handed. Meanwhile, the Nazi in question Count Max Pfferman alias Heinrich Stubel (Sig Ruman) working with hotel entertainer Beatrice Rheiner (Lisette Verea) is anxious to rid himself of Kornblow so he can grab the treasure and vamoose, but his mute valet (Harpo Marx) and camel taxi service owner Corbaccio (Chico Marx) manage to make his plans fail one after another.

Screenwriters Joseph Fields, Roland Kibbee, and Frank Tashlin (uncredited but alleged to have provided several of the film’s most memorable sight gags) have done an elaborate set-up for this Marxian romp, but the boys manage to find their niches within it and operate accordingly. The love plot between the banal sweethearts Pierre and Annette (Lois Collier) is really weak in this entry, but that leaves more time for the boys’ crazy antics and Verea’s two different renditions of Kalmar and Ruby’s ”Who’s Sorry Now.” Groucho hasn’t lost a step with the snide one-liners (though there is no wonderful song for him this time making “Lydia, the Tattooed Lady” and “Hooray for Captain Spaulding” fond but distant memories) while Chico gets to do an exhilarating piano exhibition of “The Beer Barrel Polka” and Harpo (who naturally is the first to stumble on the treasure) pulls up a convenient harp amid the other stolen gems and plucks out the “Hungarian Rhapsody No. 2” to impressive effect. Veteran director Archie Mayo handles the Marxian chicanery quite dutifully: chaos at a nightclub as Chico makes a fortune in tips while Harpo keeps adding tables and chairs to the dance floor and later a brilliant farcical set piece as Stubel attempts to pack his oversized trunks only to be thwarted at every turn by the Marxes. The climactic airport showdown goes on a bit too long and isn’t as funny as it could have been, but the good will the boys have built up by that time excuses a lack of imagination near the end.

While all three of the brothers have noticeably aged (Chico the least; his gambling debts were the reason the brothers came out of retirement to make this and Love Happy), it’s so great having them back on the screen and up to no good that one ceases to notice the thinning hair and facial creases and just settles back to enjoy their mayhem. Sig Ruman, one of their favorite victims from earlier films in their career, scores here, too: exasperated and frustrated by their outfoxing him every step of the way. Lisette Verea is most attractive and introduces “Who’s Sorry Now” to great acclaim (though no Oscar nomination), but she doesn’t get the treatment Thelma Todd enjoyed in her two Marx outings.

The film’s original theatrical aspect ratio of 1.37:1 is faithfully rendered in 1080p resolution using the AVC codec. Overall, the movie looks sensational with deep black levels, crisp whites, outstanding contrast, and lots of detail due to very good sharpness (without any edge enhancement). The transfer also has a nice filmic look with just enough grain to give a pleasing and authentic appearance. There is a slight scratch or two that pass by fleetingly, but in the main, the picture looks marvelous. The movie has been divided into 21 chapters.

The DTS-HD Master Audio 2.0 mono sound mix is very authentic to its era. Dialogue has been well-recorded and has been mixed with professional surety with the background music and the appropriate sound effects. There is just the slightest bit of attenuated hiss to be heard, but it’s mostly minor, and your laughter may cover for some of it. There are no problems with crackle, pops, or flutter.

Audio Bonus Features: on-stage tryouts of selected brother interactions (5:52) and a montage of radio commercials for the movie (4:32)

Archie Mayo’s A Night in Casablanca certainly won’t rank alongside Duck Soup, Horse Feathers, or A Night at the Opera, but any occasion to spend time with the Marx Brothers is time well spent. The Classic Flix Blu-ray release looks and sounds exceptional, and fans should be glad to welcome another of their films in high definition to their collections.

I like the film and the Brothers did finance the movie themselves. The good news is that after sitting in some mail bin at the Post Office for over a week it's on it's way and will get it soon.

Mine is due to be delivered on Saturday, December 26. I have always enjoyed the films of the Marx Brothers, even the ones considered to be their weakest.

Mine shipped, but it looks like a January delivery date for me.

I had it in my head that it wasn't really very funny, so you can imagine how surprised I was as I found myself laughing pretty continuously throughout my viewing.

I think this is an excellent film. I liked it better than the other post Paramount Marx Brothers.

This is one of, if not the, the first Marx Brother's films I ever saw (I was around 8 or 9) and it made me a huge fan. The scene where Harpo's leaning against a building and is asked "What do you think you're doing? Holding the wall up?" was one of my favorite bits as a kid (still is).

I have no idea when my copy is scheduled for delivery - but it'll get here. I'll likely watch it the day it arrives.

Thanks for your review. Reading it just makes my mouth water waiting for the disc to arrive.
B

Angelo Colombus said:
I like the film and the Brothers did finance the movie themselves. The good news is that after sitting in some mail bin at the Post Office for over a week it's on it's way and will get it soon.
Click to expand...

I ordered some DVDs at Thanksgiving, they arrived via the USPS yesterday. I got an email from Netflix apologizing for late deliveries due to the USPS, that's a first. I have another Thanksgiving order I'm still waiting for the USPS to deliver! I can imagine there are mountains of parcels at the major sorting centers. Don't worry they'll have them cleared in a month or two.

Bartman said:
I ordered some DVDs at Thanksgiving, they arrived via the USPS yesterday. I got an email from Netflix apologizing for late deliveries due to the USPS, that's a first. I have another Thanksgiving order I'm still waiting for the USPS to deliver! I can imagine there are mountains of parcels at the major sorting centers. Don't worry they'll have them cleared in a month or two.
Click to expand...

I think after Christmas and more folks getting the virus shot i hope the Post Office will get back to it's normal deliveries. Also Media Mail has the lowest priority in mail delivery so that explains the delays in some of my discs.

Unless it's been pointed out already, "Who's Sorry Now" was composed and published in 1923, and not introduced in this movie.

Still have a Super 8 film copy of this pic which I watched many times. Back in the day. Pretty funny, even with some aging out by the bros, but much better than Love Happy,

BarryR said:
Unless it's been pointed out already, "Who's Sorry Now" was composed and published in 1923, and not introduced in this movie.
Click to expand...

I’ve never seen this one but have been buying and watching many of the Marx bros films this year.
I’ll keep an eye out for this one to pick up.

Received my copy yesterday and a nice upgrade to my TCM 4 film dvd flipper set. I wished the new release had a commentary on it but i won't complain too much.

Mine just arrived, can't wait to watch. I also ordered The Complete Hal Roach Thelma Todd Patsy Kelly Comedy Collection, along with it.

Mine shipped today. I realized Classicflix offered it on their site for the same price as Amazon so I cancelled my Amazon order to give Classicflix the full benefit of the order and added the Streamliners Collection V4 DVD, Merrily We Live BR, and The Michael Shayne Mysteries DVD.

Mine finally arrives today after being mire in the USPS system. I'm looking forward to watching it today or tomorrow at the latest.

I watched my BD today and found the movie pretty funny. When I was a kid, I was never a big Marx Brothers fan, but came to appreciate them more as an adult. IMO, this movie is their best one late in their career in which the three oldest brothers appeared together.

Thanks for the mention Robert. NIGHT really is a fun one and I agree that it's the best of their later films.

- David
ClassicFlix Founder, Producer
You must log in or register to reply here. 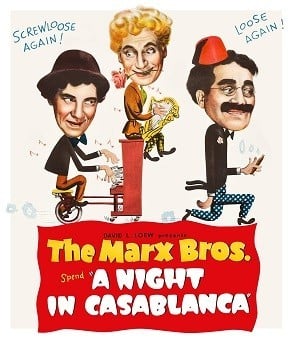