Posted on August 25, 2018 by Josh Steinberg
A brilliant new restoration makes its debut on disc. 5 Stars

Powell & Pressburger’s wonderful 1946 film, which refuses to be pinned down into a single genre, makes its debut on Blu-ray in a beautiful new restoration produced by Sony and released by Criterion. Despite being over seventy years old, the film feels surprisingly modern in both its staging and performances, and is well worth revisiting today.

A Matter Of Life And Death is a wonderfully unique film, somehow both years ahead of its time and exactly of its time. As written, produced and directed by the legendary team of Michael Powell and Emeric Pressburger, the film refuses to be easily categorized into any one particular genre; a case could easily be made for the film as a romantic fantasy, medical drama, humanistic comedy, and probably everything in between. The filmmakers use the fantastical concept to tell a story that comes closer to understanding the human condition than most straight dramas ever do.

The film opens up with RAF pilot and squad leader Peter Carter (played excellently by David Niven) trying to fly home on a badly damaged plane after a bombing raid. Though he’s kept the plane in the air long enough for his men to parachute to their safety, Peter knows that his parachute is busted, and that there’s no viable escape route for him. Whether he goes down with the plane, or tries to jump for it, he’s a goner. His final action is to radio in to the base to give a final report, where he is connected with an American radio operator, June (Kim Hunter, also excellent) who is based in England. There’s instant chemistry between the two, but they both know that this is the only time they’ll ever speak, except… somehow Peter doesn’t die. He instead wakes up on a beach, and soon discovers that he’s right near the location that June was broadcasting from. He hurries in the direction of her base, and the two meet face to face and fall in love instantly. Meanwhile, in the Other World (the film’s version of an afterlife), it appears that the ledger doesn’t add up; they’re one soul short. It would seem that the London fog made it difficult for him to be spotted, and Conductor 71 (Marius Goring, in a delightful performance as a former French aristocrat who was executed during the French Revolution in life, and now serves as a guide of sort in the afterlife) missed his chance to pick up Peter. Before long, Conductor 71 is sent to Earth to retrieve Peter, who does not wish to die, and begs for a chance at an appeal. While arrangements are being made in the Other World for Peter to plead his case for why he should be allowed to remain on Earth, Peter begins to fall ill, diagnosed with a brain injury by Dr. Frank Reeves (Roger Livesey, in another of the film’s great performances). While Peter must argue for his life to the powers that be in the Other World, on Earth he must also survive a challenging operation if there’s any hope for his survival.

The filmmakers wisely sidestep any questions as to whether the onscreen action is real, or a hallucination caused by Peter’s brain injury. It’s rare that a film can have things both ways and still succeed, but this is one instance where it works beautifully. Whether Peter is hallucinating a vision of heaven as his brain shuts down, or whether there is an afterlife that Peter is trying to resist the pull of, is entirely up to the viewer. Whether the story should be taken literally or metaphorically is of little importance; it’s whichever explanation the viewer needs it to be. Perhaps both are true simultaneously.

The film’s performances are all outstanding. As Peter, David Niven is absolutely perfect. His opening scene, as the plane is about to go down, does more than enough to ensure that he’ll retain the audience’s sympathy and attention for anything else that may follow. He plays Peter as a man who is smart enough to know that his explanations of an other world sound utterly preposterous, but open enough to understand that his survival is hard to explain without there being some kind of unlikely story behind it. Kim Hunter, as June, is every bit his match. Though the plot dictates that they must fall in love quickly, Hunter and Niven sell it easily, and her feelings for him are never in doubt. Roger Livesey gives a warm and tender performance as Dr. Reeves, who initially believes that there must be a medical explanation but eventually comes to see that the medical and the metaphysical may be more related than he thought. And as Conductor 71, Marius Goring is an absolute delight, chewing the scenery with great class, distinction and humor. There is simply not a single false note in any of the performances.

As good as the actors are on-camera, the behind-the-scenes efforts here are no less impressive. Powell and Pressburger’s script and direction show a great deal of trust for the audience; they know what needs elaboration and what doesn’t, and though the film has a complex set of rules for how the two worlds interact, it comes across as intuitive to the viewer. Their inspired choice to film the scenes on Earth in glorious three-strip Technicolor, and the scenes in the Other World in black and white, works as brilliantly today as it did then. As photographed by the great Jack Cardiff, both the color and black and white cinematography are visually striking and emotionally provocative. There’s a shot about midway through the film when Conductor 71 moves from the Other World to our own; the shot begins with a close-up of the flower on his lapel in crisp black and white, which then turns to color as he arrives on Earth. It’s the kind of thing that could be accomplished digitally today with little effort, but would have been incredibly difficult to pull off seamlessly in 1946; it’s astonishing how perfect that shot looks, even by today’s standards. The same could be said for much of the film. And speaking of astonishing, the film’s best known set piece, the giant stairway connecting the two worlds, remains a remarkable feat of imagination and engineering. It might seem like an obvious idea today, but at the time, no one had ever quite done that before, and it’s a breathtaking effect.

So much of A Matter Of Life And Death might seem familiar to a modern audience, even one that has never seen the film. Part of that may be from how often the ideas first presented here have been recycled since its original release, whether in film, television or literature. But whether this is the viewer’s first time seeing a story like this, or the one hundredth, there’s something remarkably fresh about the film. With incredible performances, brilliant designs, and breathtaking cinematography, A Matter Of Life And Death is a masterpiece that lives up to its reputation.

Criterion’s presentation of A Matter Of Life And Death, from a new 4K restoration prepared by Sony, is nothing short of astonishing. It is presented in its original aspect ratio of 1.37:1. The Technicolor sequences look absolutely stunning, with gorgeous use of color that’s expertly reproduced here. The black and white sequences are equally impressive, with perfect sharpness and clarity. Though the liner notes detail the challenges the restoration team faced, it is to their credit that their work is entirely seamless. This is one of the most beautiful examples of Technicolor available on Blu-ray.

The monaural audio is presented in an uncompressed PCM 1.0 track which is simply flawless. Dialogue is well recorded and easy to understand within the mix. Music and effects also sound fantastic. There are no issues whatsoever with hiss or any other age-related artifacts.

Audio Commentary from 2009 featuring film scholar Ian Christie – Christie’s insightful commentary is delivered in a pleasant manner and has lots of good insight into the film’s production and deeper meanings. He does at times end up narrating the onscreen action, but there’s still a lot of value here.

Interview from 2008 with filmmaker Martin Scorsese (9:16, HD) – A rapid-fire but loving tribute to the films of Powell & Pressburger.

New Interview with editor Thelma Schoonmaker (director Michael Powell’s widow) (32:38, HD) – Rather than provide an in-depth review of this extended interview, I will simply share the four words that I jotted down in my notepad as I was watching: warm, insightful, articulate, wonderful.

The Colour Merchant (10:20, HD) – This short documentary from 1998 is focused around an interview with cinematographer Jack Cardiff about the film’s photography and use of color. It appears to be an upconversion of an SD master but still looks quite good. Cardiff’s comments are well worth checking out.

The South Bank Show: Michael Powell (54:59, HD) – This 1986 television program features a wide range of clips from the director’s films, with Powell himself hosting and providing commentary. The style of the documentary is dated, but the recollections are worthwhile. Upconverted from SD.

Restoration Demonstration (4:39, HD) – Clips of the film from before and after the new restoration are shown together.

Booklet – The booklet features an essay from film critic Stephanie Zacharek and extensive notes about the restoration.

A Matter Of Life And Death is a wonderful film from the legendary team of Powell & Pressburger. The presentation of the film itself is truly outstanding. A generous array of bonus features do a thorough job of examining both the film’s production, meaning and place in film history. (The only thing missing is a trailer.) This is easily one of the year’s best disc releases for both longtime fans of the film and newcomers alike. 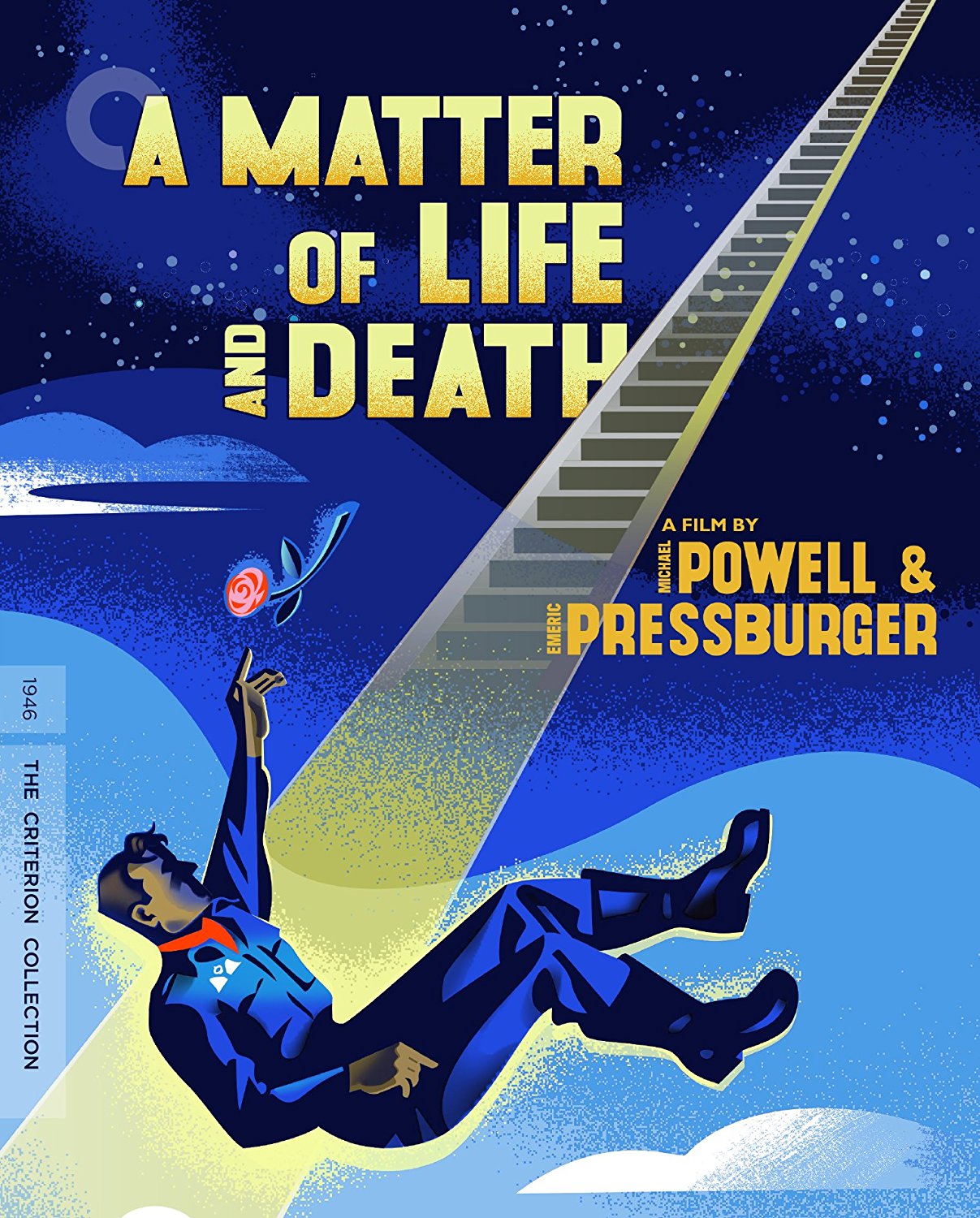