Forum List What's new Dark Style Change width
Log in Register
What's new Search
Menu
Log in
Register
Navigation
Install the app
More options
Dark Style
Close Menu
Posted on June 8, 2018 by t1g3r5fan
You are using an out of date browser. It may not display this or other websites correctly.
You should upgrade or use an alternative browser.
OK release of influential Spaghetti Western 3 Stars

With A Fistful of Dollars, the Western genre received a dramatic face lift at a time when the genre was waning in popularity with the movie going public. While Italian westerns were made in conjunction with Spain and Germany in the past, this movie was the first to truly be considered a Spaghetti Western, giving birth to the sub-genre. In the process, the success of the movie helped boost the careers of director Sergio Leone and composer Ennio Morricone while launching an actor who previously had bit parts in movies and success on TV as part of the cast of Rawhide into international superstardom – Clint Eastwood. The recent release of the movie by Kino offers up some bright spots as well as some flaws.

A stranger without a name (Clint Eastwood) wanders into the dusty border town of San Miguel and quickly finds himself caught between two warring factions vying for control of the town: the American Baxter clan, led by the town’s sheriff, John Baxter (Wolfgang Lukschy), and the three Mexican Rojo brothers – Don Miguel (Antonio Prieto), Ramon (Gian Maria Volonte), and Esteban (Sieghardt Rupp). After sizing up both factions, the stranger decides to play both sides against each other in a series of confrontations, shootouts and double crosses. In the midst of the process, the stranger comes to the aid of a local family caught between the two sides and the local innkeeper, who becomes the confidante of the Man with No Name. While both clans think that they can pay off this stranger, it soon becomes clear that loyalty cannot be bought from this man.

Using Akira Kurosawa’s samurai classic Yojimbo as a template, Sergio Leone reinvigorated a genre that had become passe due to the abundance of cliches that had become commonplace. While westerns were made by Italian filmmakers prior to Fistful, the movie was the beginning of a style that was uniquely Italian, characterized by the use of dramatic close ups and long shots that would become signature to the subgenre in later years and countless imitations spawned by this film. Prior to the movie, Clint Eastwood had only played bit parts in Hollywood movies and was known for his appearance on TV’s Rawhide; following this movie was the beginning of the ascent to stardom which culminated with success both in front of and behind the camera. The film also effectively launched the careers of Leone, whose success with westerns would reach its apex with both The Good, the Bad and the Ugly and Once Upon a Time in the West, and composer Ennio Morricone, who began a run of memorable and atmospheric scores on both sides of the Atlantic that ha made him a legend in film scoring. Also worth mentioning is Gian Maria Volonte, who parlayed his great turn as a villain here into more memorable roles like the bandit Indio in the followup For a Few Dollars More and the corrupt, homicidal police officer in Investigaton of a Citizen Above Suspicion. In addition to Volonte, note must be made of cinematographer Massimo Dallamano, whose visual compositions would help to define the genre he helped create; after work on For a Few Dollars More, he turned to directing movies in a number of genres before a car accident took his life in 1976. In short, A Fistful of Dollars didn’t just create a subgenre while breathing new life into the Western, it served as a launching pad for a few notable members of the cast and crew.

The transfer for Kino’s release is taken from a 4K restoration performed by Cineteca di Bologna back in 2014 from the original Techniscope negative. Now the transfer has come up as a bone of contention for most people, so I’ll try to set the record straight on this the best I can. A few positive attributes: the print, for the most part, looks clean, with not much in terms of dust, dirt, or tears, with only minor speckling apparent from frame to frame. The grain structure looks fairly intact as well. In addition, the original multicolored United Artists/Transamerica logo is restored to the opening of the film, making this the first time the logo has been seen on any home video release of A Fistful of Dollars and the first time since its initial US release back in 1967. The major downfall of this transfer is the color palette, or lack of consistency from scene to scene. Our very own RAH mentioned about the fluctuations in his A Few Words About article, ranging from a slight hazy yellow-orange in some scenes to a cyan blue in others – the latter more notable in some scenes involving shadows or nighttime. According to the restoration notes following the movie, a Technicolor print was utilized for the color correction process. In short, while the transfer is eminently passable and watchable, it’s not much better or worse than previous home video editions of the movie; Kino certainly did the best they could with what they had to work with, but the results don’t really match up to what we expect for a 4K restoration.

Presented in a 2.0 DTS-HDMA track, the movie’s original mono sound mix comes off very well rendered. Ennio Morricone’s iconic score sounds very strong and the dialogue is very clear and understandable, even for a low budgeted production. The 5.1 stereo surround mix, featured on the previous MGM Blu-ray and Special Edition DVD, is also carried over here and sounds very good as well.

This is where the Kino Blu-ray really shines; special features from previous editions are carried over here as well as some new goodies to sweeten the pot.

Audio Commentary by Sir Christopher Frayling – Originally recorded for the 2007 Special Edition release of the movie, the film historian and Sergio Leone biographer provides amazing detail about the production and its cast and crew.

Audio Commentary by Tim Lucas – Newly recorded for this release, the film historian covers details on the film and its place in Italian cinema. Both this commentary and the Frayling commentary overlap in terms of information in some areas, but are very insightful and worth a listen nonetheless.

Interview with actress Marianne Koch (32:57) – (In German with English subtitles) In this interview recorded in 2017, the German actress, who played Marisol in the movie, shares her memories of working on the film – which she initially turned down – as well as memories of Clint Eastwood and Sergio Leone.

“A New Kind of Hero” Featurette (22:53) – An extension of sorts from his commentary, Frayling goes behind-the-scenes into the making of the movie, revealing how Clint Eastwood wasn’t the initial choice for the lead (Henry Fonda and Charles Bronson were among those considered for the part first) among other details.

“A Few Weeks in Spain” Featurette (8:33) – Originally featured on the previous Special Edition release, Clint Eastwood reflects on his experience making Fistful, which would launch him into superstar status.

“Not Ready for Primetime” Featurette (6:20) – Filmmaker Monte Hellman discusses his involvement with making the prologue for the network TV broadcast of A Fistful of Dollars in this featurette taken from the previous SE release.

“Location Comparisons: Then to Now” Featurette (5:21) – Taken from the previous SE release, the Almeria, Spain locations are presented as they look in the movie compared to today (as in 2005).

The Christopher Frayling Archives: A Fistful of Dollars (18:40) – The film historian shows his collection of original posters from the movie as well as the shooting script.

Original Outtakes (2:41) – Rarely seen behind-the-scenes footage as well as goofs presented without audio, but with Ennio Morricone’s score in the background.

Radio Spots – Ten audio promos from the US release of the movie totaling six minutes and three seconds.

Trailers from Hell with John Badham (3:58) – The Saturday Night Fever and Blue Thunder provides commentary over the initial trailer for the US release of the movie.

Double Bill Trailer (2:06) – The original trailer for the double feature of A Fistful of Dollars and For a Few Dollars More from 1969.

A Fistful of Dollars is an important Western that should belong on every serious fan’s shelf. The new Kino Blu-ray, while more than worthwhile in the Special Features department, isn’t quite the complete knockout it should have been. I would say get the Blu-ray for those bonus features, but keep your original Blu-ray or DVD close by as there’s not quite a substantial improvement in visual quality. Here’s hoping that For a Few Dollars More, coming out from Kino later this year, can be that knockout fans are hoping for in this trilogy.

After reading the other thread I just got the German 2 disc with this & FAFDM. The AFOD PQ on that release is a big .

I take it the special features on this disc aren't messed up like on Kino's TGTBATU?
Last edited: Jun 8, 2018

Thanks for the review, Mychal. Like ScottjH above, I also opted for the German double feature release of the first two films from the trilogy based on RAH's comments and experiencing Kino's release of TGBATU first hand. I'm happy with that purchase, and will be passing on Kino's release of For a Few Dollars More, too.

BTW, Mychal, which "Tigers" are you a fan of?

Scott Merryfield said:
Thanks for the review, Mychal. Like ScottjH above, I also opted for the German double feature release of the first two films from the trilogy based on RAH's comments and experiencing Kino's release of TGBATU first hand. I'm happy with that purchase, and will be passing on Kino's release of For a Few Dollars More, too.

BTW, Mychal, which "Tigers" are you a fan of?
Click to expand...

To answer your question, the "tigers" I speak of are the Detroit Tigers.

t1g3r5fan said:
To answer your question, the "tigers" I speak of are the Detroit Tigers.
Click to expand...

I don't follow baseball anymore, but in my younger days I attended a lot of games at the old Tiger Stadium.

An old fave of mine for sure!

ScottJH said:
After reading the other thread I just got the German 2 disc with this & FAFDM. The AFOD PQ on that release is a big .

I take it the special features on this disc aren't messed up like on Kino's TGTBATU?
Click to expand...

All the Spaghetti trailers on the FOD Kino are still mis-encoded at 15fps. The other special features appear to be fine. "Trailers from hell" featurette uses a lousy source for the Italian trailer which is available in great quality on the Italian and Japanese discs.
You must log in or register to reply here. 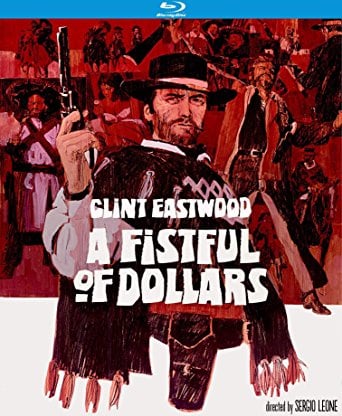