Posted on January 23, 2020 by Robert Harris
The quality - which gives us the full beauty of early 5248 Eastman Color, albeit cropped and anamorphosized, yet very accurate to what was on screen in early 1955, as produced in dye transfer prints. 4 Stars

Underwater probably has more interest historically than as a film. It wasn’t very good in 1955, and hasn’t exactly turned Cherry Pink and Apple Blossom White over the ensuing decades.

It’s a very minor work for director John Sturges, who had the ability (The Great Escape) to create films that did stand the test of time.

Historically, it was created under the aegis of Howard Hughes (same guy behind The Outlaw), now using a different tack to show off Jane Russell’s breasts, which actually aren’t the stars of the film. And this was done better in The Deep, anyway.

When RKO made their big push into wide screen, they did it in the cheapest way possible – SuperScope. Films shot flat, and optically converted, ie cropped to a 2:1 aspect ratio, and presented in anamorphic format.

Here’s how it fits into the studio release history.

RKO continued with a handful of titles into 1956.

In my teens, I used to confuse this with the Fox scope production Beneath the 12-Mile Reef, which isn’t a much better film.

So what’s good about this new Warner Archive release?

The quality – which gives us the full beauty of early 5248 Eastman Color, albeit cropped and anamorphosized, yet very accurate to what was on screen in early 1955, as produced in dye transfer prints. Skin tonalities are gorgeous. Grain structure, perfect. It’s a glossy, beautiful presentation.

For those seeking an example for their libraries of SuperScope, this is a gorgeous release, although there are better SS productions, such as Vera Cruz.

Upgrade from DVD – Was this ever released on DVD? 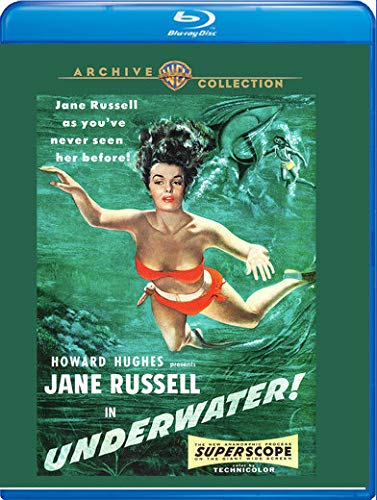