Forum List What's new Dark Style Change width
Log in Register
What's new Search
Menu
Log in
Register
Navigation
Install the app
More options
Dark Style
Close Menu
Posted on January 28, 2019 by Robert Harris
You are using an out of date browser. It may not display this or other websites correctly.
You should upgrade or use an alternative browser.
A beautiful Blu-ray, that will be heralded by fans. 4 Stars

I’m certain that the Allied Artists’ production, The Giant Behemoth has a slew of fans, and rightfully so, as it harkens back to the best of stop motion animation.

But to me, the story isn’t about the film, but rather, the filmmaker.

I met Gene Lourie in 1981, as he lived on the same street in Hollywood as a few of my friends – Gardner.

When we met, we discussed his work with Abel Gance and Jean Renoir. I was enthralled to be able to spend time with he and his wife.

It was only a few weeks later, when I set up a dinner at my hotel, that I realized the full width and breath of his career.

I had been thinking of him as an art and set director:

But somehow, I had totally overlooked (and felt foolish having done so), his directorial efforts, some of which
I had marveled at as a kid.

The Beast from 20,000 Fathoms
The Giant Behemoth
Gorgo

Of course, he worked as an art director into the 1980s, but my interest was in his earlier career.

One thing that I recall, was him explaining how during the La Marseilles sequence in Napoleon, that Abel had singers strategically placed throughout the audience to break into song at the correct moment.

Which is a long-winded way of bringing us back to one of the latest Warner Archive releases, the afore mentioned The Giant Behemoth.

or was it nuclear testing?

A beautiful Blu-ray, that will be heralded by fans.

For those seeking the UK version. I’d not bother. It’s shorter.

Robert Harris said:
New I'm certain that the Allied Artists' production, The Giant Behemoth has a slew of fans, and rightfully so, as it harkens back to the best of stop motion animation.
Click to expand...

I regretfully must disagree with Robert about this movie. I think the stop motion is poor, the acting sucks, it seems to move along jerkily, plot-wise.

I think if this had been a childhood favorite, I’d be more generous, but I hated it as a kid. My dvd will suffice.

Wonderful film and thanks, Robert, for your fine assessment and recommendation.
F

I haven't seen "The Giant Behemoth" (after reading Robert Harris's words I've just ordered it), but let me second Harris's high opinion of "The Beast from 20,000 Fathoms." It's my favorite of the black-and-white Harryhausen films I've seen, with a marvelous, indelible performance by Cecil Kellaway (no doubt deepened by Eugene Lourie) that adds an important, crucial element of pathos to the destruction caused by the beast. Lourie paces and shapes the film brilliantly.

I loved THE GIANT BEHEMOTH when I was a child, and saw it multiple times. I particularly remember, as a child, loving the monster. So I bought this when it came out on DVD, and something very strange happened. While I thought the monster was still very impressive looking as individual images, for me (& I think many others on this Forum) the stop-motion animation was pretty awful--jerky and sloppy looking, which completely pulled me out of the film.

However, whenever the monster wasn't present, I found myself watching the film in spite of myself, and being drawn in by the images and performances. Visually, the film has an extraordinary sense of place and also of mood, which put me in mind, not so much of other movies, but of Simenon's early detective novels,where nature, in terms of rain and fog, seems to seep into the characters themselves, and determine what happens. That same sense of nature, of fog and rain and the sound of waves determining a mood is very present in THE GIANT BEHEMOTH, and also in the very controlled performances, that are of a piece with the photography and the film's emotional underpinnings.

In fact, THE GIANT BEHEMOTH could be appreciated--well, let's say I appreciate it, in spite of the less than perfect stop-motion animation--an above average European art film, with an amazing sense of place and also of character and how the two collide.

And of course, I'm not criticizing anyone for not liking this film. I didn't like it either when I first saw it as an adult on DVD; except so many of the film's images stayed with me, that I went back and watched it again, and little by little, found myself admiring a great deal of it.

btw, thank you Mr. Harris for your few words on Eugene Lourie, which are some of the most most articulate, and heartfelt, that I have read about him.
S The Beast from 20,000 Fathoms
The Giant Behemoth
Gorgo
Click to expand...

LIke many that grew up in the 1960's, I watched all three films numerous times on TV. I enjoyed them all, but for some reason I enjoyed Gorgo the most because of the great reveal in that film. My BD arrived on Tuesday so I have to watch it in the near future. Matter of fact, I have all three movies on Blu-ray, granted the two that came from Warner looked much better than Gorgo from VCI. Anyhow, I might try a triple feature one day during one of these cold wintry days.
Last edited: Jan 25, 2019

Johnny Angell said:
I regretfully must disagree with Robert about this movie. I think the stop motion is poor, the acting sucks, it seems to move along jerkily, plot-wise.

I think if this had been a childhood favorite, I’d be more generous, but I hated it as a kid. My dvd will suffice.
Click to expand...

Probably for the same reason that I do: it was issued as part of a box-set that included Attack Of The 50' Woman starring the magnificent Alison Hayes.

Disc comes with a wonderful commentary.

Wink wink nod nod. Or did you mean a commentary on 50-FOOT WOMAN? I did not buy that set.

Wink wink nod nod. Or did you mean a commentary on 50-FOOT WOMAN? I did not buy that set.
Click to expand...

The Blu-ray has an audio commentary that wasn't on the DVD.

Robin9 said:
Probably for the same reason that I do: it was issued as part of a box-set that included Attack Of The 50' Woman starring the magnificent Alison Hayes.
Click to expand...

Yup. Of course the best thing about the 50’ Woman is the poster.

Oh damn! I’m a sucker for commentaries. I alway own several bad movies, maybe another?

watched it Tuesday as soon as it arrived, and just enjoyed every moment, now that you mentioned it in your write up i am thinking of doing a triple feature

The Beast from 20,000 Fathoms
The Giant Behemoth
Gorgo

The track is recycled from the DVD and has always met with virtually universal excoriation from members of the CHFB.

I watched it over the weekend, this was my first time for the film and enjoyed it very much. I had gone in with low expectations and was pleasantly surprised at the acting being pretty good. The mating of the Behemoth to the backgrounds was not great at times but still acceptable knowing what they had to make it happen.


As I said elsewhere, the buildup was good and I fully expected the fisherman's daughter to be the love interest of some handsome scientist who would then have to rescue her later or use her as bait if it followed other similar films but that didn't happen.

Johnny Angell said:
I regretfully must disagree with Robert about this movie. I think the stop motion is poor, the acting sucks, it seems to move along jerkily, plot-wise.

I think if this had been a childhood favorite, I’d be more generous, but I hated it as a kid. My dvd will suffice.
Click to expand...

After so many comments that disagreed with my assessment of the movie, I decided to watch it again. I found that I owned this recent release and found the image quality quite good for a movie of it’s age. Also, the cast is much better than I remembered.

However, the moves along so slowly and it has scenes and dialogue that are obviously there just pad the time. The script is terrible. All, all the effects are poor. From the miniatures of the ferry and the model behemoth to the stop-motion animation all are just terrible. The stop-motion behemoth is a terrible design, that torso makes him look like he’s on steroids and he does not move naturally. I get bored of him quickly.

I then listened to the commentary. I found it to be pretty good. I think some don’t like the fact that much of the time is spent criticizing the movie, but since I agree with them, I react to it differently.

It’s shocking to think the Willis O’Brien is associated with this.
You must log in or register to reply here. 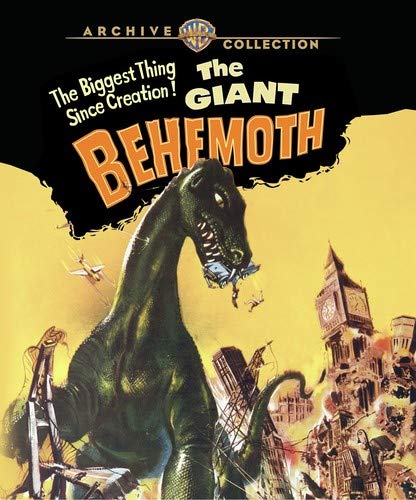