Forum List What's new Dark Style Change width
Log in Register
What's new Search
Menu
Log in
Register
Navigation
Install the app
More options
Dark Style
Close Menu
Posted on July 22, 2019 by Robert Harris
You are using an out of date browser. It may not display this or other websites correctly.
You should upgrade or use an alternative browser.
Lionsgate's new 4k Blu-ray from Studio Canal, is a gorgeous representation of the film. 4 Stars

Oliver Stone’s 1991 production, The Doors, is an interestingly constructed film, with some nice set-pieces, that has never really worked for me.

I’ll watch it whenever it arrives in a new format, and continually go back to my favorite reviewer, Roger Ebert’s comments, back in March of 1991, with which I fully agree:

“F. Scott Fitzgerald wrote that the problem with American lives is that they have no second act. The problem with Jim Morrison’s life was that it had no first and third. His childhood was lost in a mist of denial… and his maturity was interrupted by an early death, caused by his relentless campaign against his own mind and body. What he left behind was a protracted adolescence, during which he recorded some great rock ‘n’ roll.

If we can trust Oliver Stone’s new biographical film, “The Doors,” life for Jim Morrison was like being trapped for months at a time in the party from hell. He wanders out of the sun’s glare, a curly haired Southern California beach boy with a cute pout and a notebook full of poetry. He picks up a beer, he smokes a joint, and then life goes on fast-forward as he gobbles up drugs and booze with both hands, while betraying his friends and making life miserable for anyone who loves him. By the age of 27 he is dead. Watching the movie is like being stuck in a bar with an obnoxious drunk, when you’re not drinking.” – Roger Ebert

The entire review can be found on ROGEREBERT.COM

Lionsgate’s new 4k Blu-ray from Studio Canal, is a gorgeous representation of the film. A film that was apparently heavily damaged, possibly by deluxe labs, which may have over-printed the film, especially if there was no 65mm dupe produced for large format printing.

I have no direct knowledge of this, except that it has been presumably, heavily restored.

Whatever has been done, credited to a 4k scan at Fotokem in Burbank, and L’Immagine Ritrovata, in Italy, must be hiding a multitude of sins, as the marketing tells us that a major restorative effort was necessary.

Hopefully, they’ve recorded out a restored negative as an asset to replace the damaged article.

Whatever work was performed, and starting with that aforementioned scan at Fotokem, what the viewer has is extremely film like, with beautiful grain, lovely colors, and proper levels of black and shadow detail.

The track, which had an original 6-track mix, seems faithfully reproduced, now using Dolby Atmos to heighten things a bit.

The disc offers two cuts of the film, the only difference of which, as I recall, is an added ending.

If there’s a reason to grab a copy of this, it would be for Val Kilmer’s take on Morrison, which for me is worth the price of admission.

And then, of course, there’s the music of The Doors.

Love The Door's music but in my option Jim's personality was that of a immature teen. Saw this in the theater when it came out and it was ok.
P

A 4K/UHD of anything shot by Robert Richardson will always capture my attentions.

I saw this for the first time only last year, & loved it, a bravura piece of film making (although unfair to Jim Morrison, I'm sure he didn't act like a looney all the time)…& now I know where the naked American Indian came from in Wayne's World 2

The Doors were one of my favorite rock groups (and I mostly dislike rock), and I felt they had a unique point of view.

I may never have found myself in the Light My Fire ecstacy, but I remember well driving an old truck around the drive-in theater where I was the projectionist (summer of 67), finding and fixing speakers that had broken. I played The Doors album through the sound system so I could find the broken ones.

Then came Stanford, and from my perch there, I watched Morrison and many others overdo it. It is as though they took their own music too seriously as a pattern for their lives. Too many interesting people lost too young.

The Doors made spectacular albums. I have all the quadrophonic SACDs.

Oliver Stone is one of the great American maverick directors and screenwriters. He is almost always interesting, regardless if he's made or written the screenplay for a great film or turkey (the exception being that dreadful Alexander, every single version of it). I remember being really bored with The Doors when I saw it all those years ago, but maybe it's worth another look? I haven't decided yet. I'm more anticipating the forthcoming 4K disc of Scarface.
B

PMF said:
A 4K/UHD of anything shot by Robert Richardson will always capture my attentions.

'Snow Falling On Cedars' being released on bluray November 5th...

That title has been on our Pre-Order Listing for a while now.

Robert Crawford said:
That title has been on our Pre-Order Listing for a while now.

I was not aware of such a listing at all- that's very helpful. Thanks for the heads up.

The Doors was originally in 5.1 CDS.

The 4K offers only an Atmos track - no other audio options...

Oliver Stone’s second film done in anamorphic Panavision and his second and last film that had a 70mm blow up. The film may not be 100 percent accurate, but I loved how epic in scope it is. Oliver Stone’s second epic film after Born On The Fourth Of July. I saw both of these in 70mm at McClurg Ct Cinema in Chicago in their main theater which was a THX theater. I for one am excited about this release. Now if Fourth Of July and JFK can come out in 4k UHD with an Atmos track.

Lord Dalek said:
The Doors was originally in 5.1 CDS.
Click to expand...

Yes, in 35mm, but the film also played in 70mm 6-track mag with split surround. I saw it at the Ziegfeld in NYC in 70mm.

Can anyone here say if the included Blu-ray is from the new master or the old disc?

ghostwind said:
Can anyone here say if the included Blu-ray is from the new master or the old disc?
Click to expand...

I know this cut is two minutes shorter than previous versions- according to Stone it’s changes to the ending. Has anyone detailed the actual changes?

That's a bit naughty. And in Europe there's a stand alone Blu-ray of the new transfer, which I'll probably buy as I'm not 4K yet, & I don't know when I will be.

Grady Reid said:
I know this cut is two minutes shorter than previous versions- according to Stone it’s changes to the ending. Has anyone detailed the actual changes?
Click to expand...

I'll have a look at the 2 endings and see if I notice anything different...
P

Colin Jacobson said:
I'll have a look at the 2 endings and see if I notice anything different...
Click to expand...

Just a hunch, but I suspect that the first ending shows how one door closes;
while, in the second, another one opens.
Last edited: Jul 24, 2019
You must log in or register to reply here.

A Few Words About A few words about...™ Star Wars: The Rise of Skywalker -- in 4k UHD Blu-ray
2 3 Tags 4k a few words about blu-ray disney star wars uhd 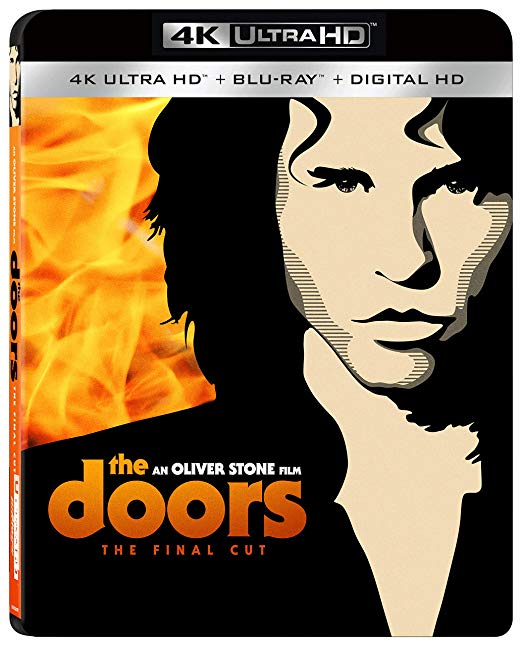