While the latest in the Terminator series will presumably be popular with fans, I wasn’t quite certain what to make of it.

I understood the storyline. It’s simple.

People or machines (or a combination of them) from the past, and or, present have travelled back (or forward) in time to stop something terrible from occurring, that may or may not have already happened.

The productions seems to take a position that any films in the series, after the first two, weren’t.

Shot digitally, with anamorphic optics, the film (is it a film, if it’s not a film?) is generally very good looking, although it doesn’t seem to be true 4k material – possibly because of the sheer number of effects.

What caught my eye, or in this case, didn’t, was the fact that at least in projection, Dark Fate is one of those productions that takes a “dark as a bat’s groin at midnight” position toward the audience’s ability to discern what is going on, who is on screen, and what are they doing.

The final reel is SO dark, that had it been shot on film, one might have cut color clear into the OCN, and allowed processing defects to stand in place of some sort of image.

That is, however, the production, as created. Or at least I presume it is, as the port to a 4k disc should not have changed data one way or another. I viewed this in projection, and not equipped with Dolby Vision. Will check and see if a flat panel makes a major difference.

If viewing in projection, consider the final 20 minutes or so, as a way to rest one’s eyes, and just take in the wonderfully strong Dolby Atmos.

“The Terminator movie we’ve been waiting for” – Scott Menzel, We Live Entertainment 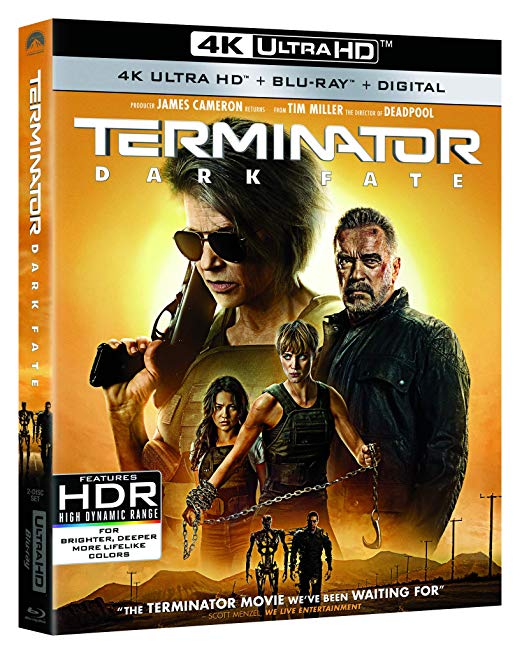