Forum List What's new Dark Style Change width
Log in Register
What's new Search
Menu
Log in
Register
Navigation
Install the app
More options
Dark Style
Close Menu
Posted on November 3, 2018 by Robert Harris
You are using an out of date browser. It may not display this or other websites correctly.
You should upgrade or use an alternative browser.
Fans who do not yet own a 4k setup, and want to run the Blu-ray until they have that capability need not apply, as the included Blu is archaic. 4 Stars

One of the all-time fan favorites in the superhero genre, coming from an earlier, far more innocent era, arrives on 4k, and it’s a winner.

While I’d have loved to be able to compare the new 4k to a modern Blu-ray of recent parentage, that can’t be done, as the previous Blu, which is also represented as the Blu along with the new 4k is showing its bottle age. Actually, it’s well past its prime.

The film was always soft. It was shot that way by cinematographer Geoffrey Unsworth. His lush grainy textures are the overriding appearance of the project. And it works beautifully.

I had to initial thoughts upon hearing that the film was coming to 4k was “why.” Other than a handful of shots, there isn’t any 4k to to be had.

And then I viewed the Blu-ray, and came to the realization that there is no comparison, simply because there is no high quality Blu-ray available. Presumably a telecine from an IP, the extant Blu-ray looks fine for what it is, but today, one will notice the lack of black, shadow detail, overall resolution.

And then there’s the constantly moving image, and total lack of stability.

So the 4k wins, possibly not because a modern Blu-ray might not appear all that different, but rather, because the extant version doesn’t hold up to today’s parameters.

More detail can be seen in the highly reflective costumes in the opening sequence. HDR has also made blacks and colors pop. It’s all good.

The addition of Dolby Atmos also raises the bar.

My other concern me when I heard about the release was the possibility of the film being shorn of its grain – and a grainy little devil, it is. But the grain has been retained, yielding a lovely velvety appearance.

Fans who do not yet own a 4k setup, and want to run the Blu-ray until they have that capability need not apply, as the included Blu is archaic.

Probably no need to include.

Thanks for the reassuring assessment Robert! I'll be picking this one up on release day.

Okay, so it looks like the included blu-ray is the same as the 2011 edition. Good to know.

Great news! I pre-ordered day one, and cannot wait.

So basically what I'm getting is the 4k is going to be a complete disappointment for many here but wins by default because the 2011 Blu-ray is too old a transfer to properly warrant a full comparison (even though said transfer is more recent than the one done for the Donner cut on S:TM).

...yeah that sounds about right.
P

DP Geoffrey Unsworth. Now there's another reason to get 4K ready.
Just think, "Superman: The Movie" and "2001: A Space Odyssey"; all in one week.
Great stuff.

I doubt its technically possible to build an Atmos mix out of the original 1978 4.1/Pseudo-5.1 mix.

...although allegedly that's being included on the 4k.

Is it possible to confirm that the second 5.1 track on here really is just plain Dolby Digital and not a lossless encode? Also, can you let us know if it has different sound effects than the Atmos track? Does Krypton sound like a box of broken glass during the destruction?

No reason fans couldnt have the original audio in PCM or HD audio format.

I suspect EVERYTHING is the original theatrical version.

Oh, question #2... On the 4K, what is the song that is playing on the kid's car radio when they are driving from Smallville high school past the Kent farm? It had better be Bill Haley's 'Rock Around the Clock'!

Mark Booth said:
On the 4K, what is the song that is playing on the kid's car radio when they are driving from Smallville high school past the Kent farm? It had better be Bill Haley's 'Rock Around the Clock'!
Click to expand...

Has it ever been anything else?

TonyD said:
Has it ever been anything else?
Click to expand...

John Williams actually wrote original music for all the car radios in Superman The Movie (presumably to cover these scenes if the rights to the selected diegetic tracks didn't pan out). Eventually those cues made it into the TV version.

So my question to what Mark said still stands. He asked that as if there are versions on home video that have a different song playing.

TonyD said:
So my question to what Mark said still stands. He asked that as if there are versions on home video that have a different song playing.
Click to expand...

Well then the answer is yes. The TV cut that came out last year has the alternate tracks.

How's the sound on Superman?

A guy on another forum (that received his copy) says the Dolby Digital 5.1 track is the original theatrical soundtrack and he says it sounds quite good (I interpreted his comment to mean that it *might* have slightly boosted LFE during the opening title sequence). He said the Dolby ATMOS track is the remix soundtrack from 2000 (or whenever the first special edition was released). He said the ATMOS track, if anything, has even more LFE than it had in 2000 for those opening titles.

So, apparently, we get the choice of both.

This is bittersweet news. I've wanted the original six-track audio released since the earliest days of the DVD format. Maybe even as far back as the Laser Disc era (when we called Dolby Digital "AC-3"). Over the years the only 5.1 track was the Thau mix, which is revisionist and doesn't sound like "Superman: The Movie".

This original mix could have been included in 2011 as a DTS-HD Master Audio track on the Blu-ray of the theatrical cut. Instead we got a conformed version of the Thau mix, with just a stereo 2.0 mix of the 1978 audio.

I'm glad we'll all finally get to experience the original discrete mix, but lossy Dolby Digital only in 2018 on a 4k disc? Could it be a size limitation? Maybe, but Ready Player One has a similar running time to Superman and has an Atmos track and a lossless 5.1 track as well.

I've moved some posts about elevated black levels and HDR/Dolby Vision calibration issues to this thread.

Well, it would have been great if the original soundtrack was lossless. That being said, I’ll take the 5.1 upgrade (whenever I get a 4K display) and pass on seeing the re-release in theaters since it’ll most likely have the redone sound effects.
You must log in or register to reply here. 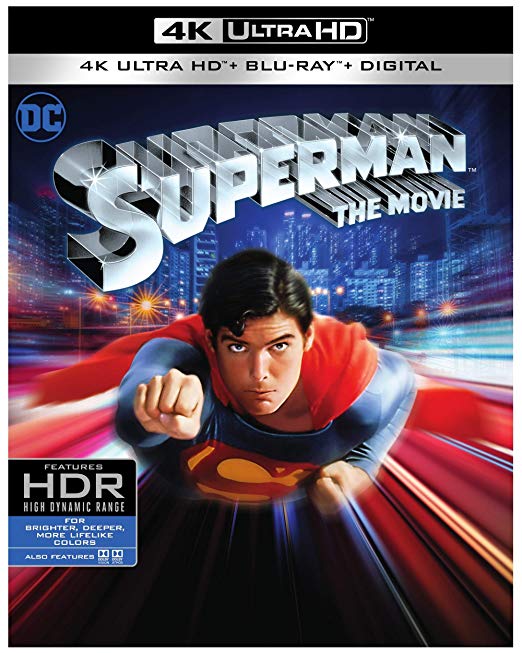