Posted on March 26, 2018 by Kevin Collins
Regardless of whether one currently can play the discs in 4k, that's the version to add to one's library, staying future proof. 4 Stars

Those Star Wars films just keep on comin’! Especially, now with Disney at the wheel.

The nice thing is that Last Jedi, from Rian Johnson, is a quality effort.

One either loves the Star Wars universe, or probably couldn’t care less. I find myself somewhere in the middle. How many ways can one stage a battle in space?

Here we have women in the pilot’s seats, and like anyone in the military is aware, no pilot goes anywhere, especially into battle without proper lip colorings.

That noted, this one does work. It’s a huge affair, that lands beautifully within the series canon.

A major attribute is that The Last Jedi arrives in 4k, from large format data files, and it’s a stunner.

Hopefully, whether via game platforms or with a new 4k player, The Last Jedi will give 4k another uptick in popularity.

Regardless of whether one currently can play the discs in 4k, that’s the version to add to one’s library, staying future proof.

Audio in Dolby Atmos is huge, proscenium filling, and state of the art. 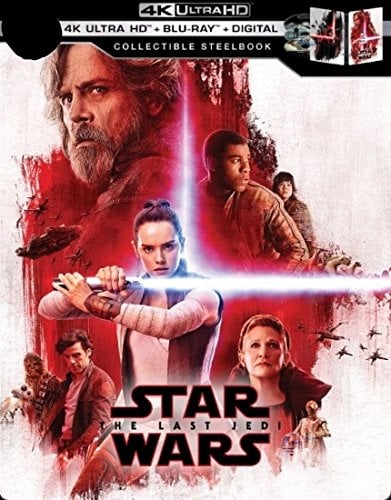