Pandora and the Flying Dutchman, a 1951 fantasy directed by Albert Lewin, is an interesting film.

Photographed by Jack Cardiff, it’s also (or has been in the past) a beautiful film.

Because of this, and a discussion I had with Ray Rohauer, (the source for the Cohen library) aeons ago,
I expected more from this Blu-ray. Which may not be the fairest way to begin a review.

There’s no way to know if what I was told had any bit of truth, as Ray was one of the more interesting
scoundrels I’ve ever known – and I mean that in the nicest way possible – think 18th century England.

He supposedly held the pristine camera negatives, as well as protection elements.
In the intervening decades, they may well have deteriorated.

What the Cohen group has apparently accessed, are not those elements, but rather another set of masters,
that were deposited by MGM with GEH in Rochester. And these elements are noted to be problematic.

So what can I report about the new Cohen Blu-ray?

On most levels it’s superior to any previous video releases. In overall resolution, and lack of blooming contrast,
it wins kudos. Digital clean-up and registration of the elements are fine.

But the loss here – not having an original negative – having improperly produced protection elements –
I’d like to drop on Ray, as the Cohen group can only access what survives.

Dupes, which are at least fifth generation, get a bit unpleasant, but they are what they are.

The main title sequence, is an abomination, and presumably doesn’t survive anywhere in original or protection form,
short of prints, of which there are enough to go around.

At the end of the day, while I’m pleased to have PatFD on Blu, I can’t but help to think of what it might have been.
Had the masters been, once again, scanned, might it have looked better than what we have?
Possibly, but the cost could have been prohibitive.

I can’t speak to the color palette, but would have preferred a bit less warm overall imagery.
In the restoration demo, I actually preferred several of the before to the afters, especially in color and resolution.

All of that noted, it’s a film worth seeing, although I’m unable to agree with The New York Times and their opinions, to whit,
a part of my problem is with the Times’ comment (quoted for publicity) – and I respect the Times – have since 1851, that “The glorious Technicolor modern myth, digitally restored to sensational effect, sayeth J. Hoberman, a reviewer who I also respect.

Along for the ride is Mr. Lewin’s 1957 The Living Idol, which may best be forgotten. Strangely, the film, which was shot
by another British cinematographer of note, Jack Hilyard, is presented with a “restoration trailer,” but is unrestored.

Not that it matters, as its a terrible film. If one is going to invest in a film, this isn’t the one.

I have the Kino Blu ray. Is it better than that one? 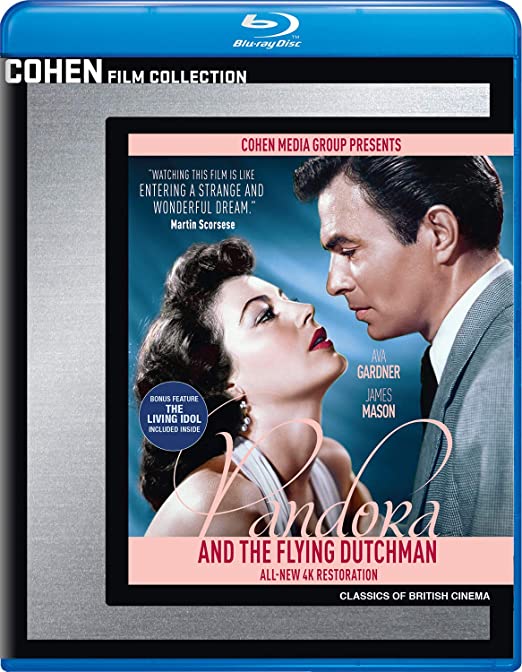