Posted on October 24, 2018 by Robert Harris
I make note of this, as Universal's new 4k UHD / HDR / Dolby Vision, makes full use his work, and delivers a magnificent 4k Blu-ray that appears more like actual 4k than a 2k uprez. 4 Stars

Ol Parker, possibly best known for his Exotic Marigold Hotel films, moves the locale from India to Greece, for the second in the Mamma Mia! series.

If you enjoyed the first film, the second is more of the same, with a few new faces, and more songs from the great Swiss band Sha-Na-Na, only now digging a bit deeper into their catalog of B titles, while a few of the top numbers are recycled.

While I didn’t love the film, I did find it a brief respite from the international news, and in that sense a pleasure, especially since the delightfully talented Amanda Seyfried once again graces the top spot.

That said, and it could be just me (tired?) it took me awhile to fully understand the two story lines, and dual casts until I was well into the the film. This may have been partially based on quality casting of the younger and older roles.

I found myself confusing Amanda Seyfried with Lily James, who have a not dissimilar look, although Ms James was not cast as a younger Seyfried, but rather a younger Meryl Streep.

Likewise, we meet the younger alter egos of the other leads…

The decidedly fun piece of entertainment, had different cast members popping up, especially in the finale, adding to, or confirming my earlier questionable state of mind.

In the end, if you enjoy big boisterous musicals that exist simply for the fun of it, this one may be for you.

Director of Photography, Robert Yeoman, who has previously performed similar miracles with the locales he has been afforded, makes the film appear to have been actually filmed in the Greek isles, instead of Croatia, and studio work in the UK.

I make note of this, as Universal’s new 4k UHD / HDR / Dolby Vision, makes full use his work, and delivers a magnificent 4k Blu-ray that appears more like actual 4k than a 2k uprez.

Audio is theater-filling Dolby Atmos, which makes the film all the more entertaining. 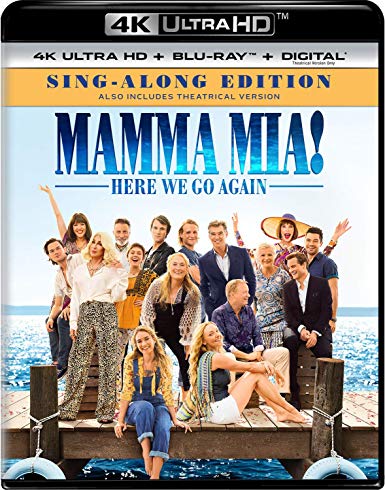