Posted on July 19, 2018 by Robert Harris
As for the film. Terrific fun, and a drop-dead gorgeous 4k Blu-ray from Universal. 4 Stars

I’ve always felt that Steven Soderbergh should try his hand at a caper film, and he finally did in 2017.

I’ve only recently caught up with this delightful Coenesque dramady on 4k, and loved every minute of it.

Shot via a Red Epic Dragon, and yielding a final 4k DI, fans of the format have another true 4k to add to their libraries.

Great cast, including a newcomer, named Daniel Craig, and enough talent in even small roles to add to it’s mystique, it’s based upon an original screenplay by another first-timer, Rebecca Blunt – no relation to Emily.

I was interested in how the production came to be, especially with an unknown 17 year-old screenwriter, so I reached out to Ms Blunt, who is going into her senior year at Huntington HS, in Huntington, WV.

It all begins to make sense.

With parental permission, I was offered a short interview, which took place yesterday afternoon.

On the line was newly minted screenwriter, Rebecca, her mother Eleanor, and yours truly:

Eleanor: Thank you for reaching out to us, Mr. Harris. Rebecca hasn’t done many interviews. What should she call you?

RAH: How did the project come together? Was this a spec script?

RAH: A script that you wrote, without knowing anything might happen to it? That it might not end up even getting read?

Rebecca: No, I knew it would get read. I wrote it for a filmmaking class here at HHS.

Eleanor: I believe the question is did you have any idea that a filmmaker might want to make film out of it.

Rebecca: No, it was just for my assignment, but my teacher, Mr. Callaghan, thought it was really terrific, so he sent it to someone he knows in California.

Rebecca: Well, someone called and offered to pay me for it, and asked me to make it longer. And I did.

RAH: Where did the basic idea come from?

Rebecca: Well, my dad is in prison, and this is kind of what actually happened to him and his brother. We changed all the names, but it’s pretty much, what’s the word, autobiographical. Except that in their case, they got caught, which is why my dad is still in – well you get the idea.

RAH: Had you ever written a real screenplay before, or was this the first time?

Rebecca: No, this was the first. My mom bought me some software – it’s called Screenwriter, and that made it kind of easy, because it had to be in the right format and everything.

RAH: How did Mr. Soderbergh get involved?

Rebecca: Somehow, it got to him through an agent. That was back in really early 2016, and they bought the script from us in April. I got to spend my whole summer that year in Georgia mostly, but a little bit in North Carolina, and I loved every minute of it. Mr. Soderbergh was so nice, and so were all the actors, and crew. I even got to meet Seth MacFarlane.

RAH: So it was a fun experience for you.

Rebecca: It was really exciting seeing the story come to life, but kind of boring at the same time, because sometimes you’re on set, and nothing happens for ages.

RAH: You’re going into your senior year in the fall. Is screen writing something that interests you, or is this a one-shot.

Rebecca: Oh, no. I’d like to go to UCF in Orlando when I graduate. I visited them just a couple of weeks ago, and they said they’d be really excited to have me. And they were really good, in that if I decide to go there, they understand that I can’t go to class all the time, because I have to write. You know, the people that made Blair Witch went there.

Eleanor: Go ahead and tell Robert.

Rebecca: Well, my agent – I have an agent now – got me a three picture deal with Amazon, so I need to spend more time writing. I had to give up being on the Cross Country team, and I’ll miss that, but it’s okay.

RAH: So, how has this experience changed your life?

Rebecca: Well, we’re moving. Mom already found a buyer for the trailer, and my friends are all excited, because our new place has a pool, and a stable, for my new horse.

Oh, and Mom can afford to pay for her divorce. And she just made an appointment for a boob job…

Eleanor: I don’t think we need to go there, Bec.

RAH: Okay…, well thanks so much for your time. You’ve answered all my questions. Best of luck!

For a new writer, Logan Lucky is an extremely well layered, and nuanced screenplay. I hope we’ll be seeing her name on screen again in the near future.

As for the film. Terrific fun, and a drop-dead gorgeous 4k Blu-ray from Universal.

Sound design by Larry Blake, is up to his normal standards.

So pleased that Steven finally went the caper route.

Overall color design, is especially intense in some situations, which takes advantage of the format. 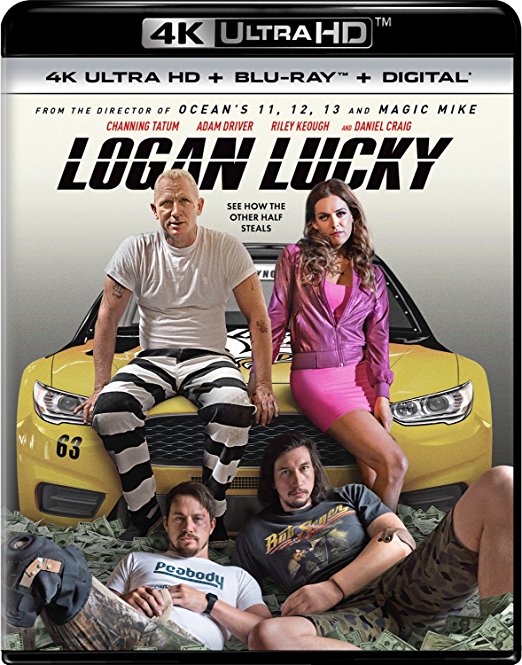