The new Blu, is from a CinemaScope master provided by Fox, and it looks wonderful, with proper grain, and color that has that has an appropriate deluxe appearance. 4 Stars

Make no mistake. Hilda Crane, which Twilight Time is now offering on Blu-ray, is a soap opera.

But it’s a good one.

With a screenplay by Philip Dunne, (How Green Was My Valley, The Last of the Mohicans, Forever Amber) and derived from the play by Samson Raphaelson, there’s meat on the bones.

And then there’s Jean Simmons.

The new Blu, is from a CinemaScope master provided by Fox, and it looks wonderful, with proper grain, and color that has that has an appropriate deluxe appearance.

I watched it a few days ago and was very happy with the picture and sound quality, another great TT release.

I've had my disc for a few days now but I haven't found time to watch it, apart from glancing at a few seconds here and there. From what little I have seen, I agree that it looks magnificent. 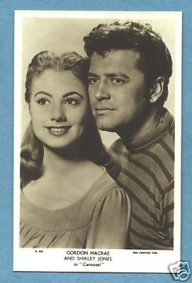 The Archive release was non-anamorphic and somewhat grainy, but in stereo. I am looking forward to receiving and viewing the blu ray.
Jean Simmons elevated any movie she appeared in. She raises HILDA CRANE to a near Douglas Sirk level, as does the direction and screenplay by Dunne and the superb Raksin score. She is ably supported by Evelyn Varden, who usually steals any movie she is in, as Guy Madison's monstrous mother. The scene in which she and Simmons 'face off' before the marriage ceremony is a bona fide 'tour de force' and perhaps the dramatic highlight of the movie.
Interestingly, the play was written by the same playwright who wrote THE JAZZ SINGER back in the twenties, Samson Raphaelson. My only complaint is that Guy Madison is as bland as ever as Hilda's main love interest and a better actor would have added some subtle layers to this mother-dominated character. At best, Madison was adequate in his film roles.
Simmons was undervalued and taken for granted. Never an Oscar winner (and only nominated twice, for HAMLET and THE HAPPY ENDING), one critic said of her work in GUYS AND DOLLS: "she gives the best
performance in the film, bringing more to the role than was there (as written)". She won a Golden Globe for this movie, and at least the Foreign Press recognized her superb characterization of Sister Sharon in ELMER GANTRY, which at least equalled the work of Lancaster and Jones (who both won Oscars while Simmons was not even nominated), Her intelligent and moving performance as Varinia the same year in SPARTACUS also went unnoticed by the award-givers. Like many others, she has won "the Oscars of time", to quote author David Shipman (The Great Movie Stars- The International Years).
Reactions: Richard M S and bujaki
You must log in or register to reply here.
Share:
Facebook Twitter Reddit Pinterest Tumblr WhatsApp Email Link