Posted on July 5, 2019 by Robert Harris
This is an extraordinary Blu-ray of an extraordinary film, which should be in every serious collection, containing some of the greatest Berkeley set pieces ever filmed. 4 Stars

It truly does not get any better than this.

Footlight Parade, the Lloyd Bacon directed musical extravaganza, photographed by George Barnes and choreographed by Busby Berkeley, once again looks much as it did at its premiere in 1933.

The Wizards of WB, have taken a recently produced fine grain master, derived from the almost 90 year-old nitrate camera negative, and taken it back to perfection.

The grain structure is velvety, gaining a bit at dupes, which are short cut. Black levels, shadow detail, are both meticulously rendered.

Footlight Parade is probably the perfect introduction to the Warner Bros. musicals of the ’30s, even though it was his third for the studio, after 42nd Street and Gold Diggers (both also 1933).

The film is a veritable who’s who of WB talent –

James Cagney, proving that he really could dance;

William Keighley, before he graduated to directing some of the great Cagney and Flynn vehicles, as dialogue coach. 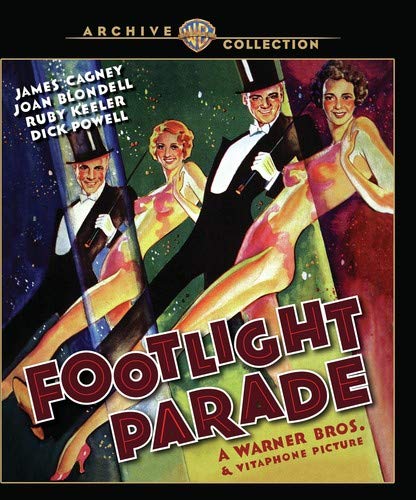