Posted on September 1, 2019 by Robert Harris
This edition is huge, and a technical marvel, with the very best of scans, color, clean-up and audio. 4 Stars

They begin with a confused public reception, as this is without a doubt, the Best Picture of 1979.

Not that it wasn’t nominated. It was.

Along with seven other nominations: Film Editing, Sound, Cinematography, Screenplay based from Another Medium, Art/ Set Direction, Director, Supporting Actor.

It won for Sound and Cinematography.

This is another of those films for which I’m jealous of those seeing it for the first time. So if you fit into that category, make certain that you see it (if not theatrically) on the best possible 4k system, with Atmos – and LOUD.

My initial exposure was in early September of 1979, returning to New York with a French friend, who spoke little English, from Telluride. We saw it at the Ziegfeld, and he was bowled over by the audio and the visuals. He didn’t need no dialogue.

And he understood wide screen. Boy, did he ever!

I was going to note that it’s one of the most important films of the 1970s, and realized that I’d be giving Apocalypse short shrift, as it’s one of the finest films ever made.

Lionsgate’s new edition is probably also the best buy on the market for an important film, in a top quality restoration – and a restoration it is. Probably less than 10% sold as such are, in reality.

I’ll get into that in a separate piece.

I picked up a copy at Target. It wasn’t yet displayed, so a young lady was kind enough to find one in the back for me. While waiting, I looked around at other 4k films, and their prices. The Toy Story series, runs$30. Wonder Woman runs $37, Dumbo $35, Iron Man films $30, Avengers Endgame $35. They’re all up there.

Which makes Apocalypse, in a six-disc set, with two 4k discs (Final Cut & Redux), the bargain of the season, at $25.

For those hiding beneath a rock by the river, the film was directed by Francis Ford Coppola, written by John Milius, and Mr. Coppola, photographed by Vittorio Storaro (yes, it’s presented in 2.35), with production design by Dean Tavoularis. The Final Cut was edited by Walter Murch, who also gave us sound design.

The film is based upon a novel that some might consider unfilmable – Heart of Darkness by Joseph Conrad, first published in 1899, and which had little to do with the Vietnam conflict.

Those who know the film don’t need to be sold on it.

This edition is huge, and a technical marvel, with the very best of scans, color, clean-up and audio.

The subs in your home cannot handle the low frequency information on the film.

But you can give it a try.

Do I believe this is the best version?

Probably, although I also appreciate the longer Redux. 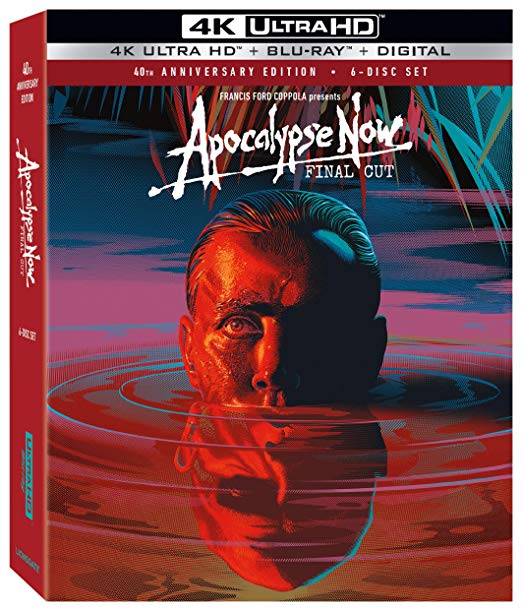