Forum List What's new Dark Style Change width
Log in Register
What's new Search
Menu
Log in
Register
Navigation
Install the app
More options
Dark Style
Close Menu
Posted on April 22, 2019 by Robert Harris
You are using an out of date browser. It may not display this or other websites correctly.
You should upgrade or use an alternative browser.
With so many current 4k releases, being nothing more than a new-skew up-rez, Alien is the real deal. 4 Stars

Color, densities, grain structure, black levels, shadow detail, and last but not least, overall image resolution are so far a step above the old Blu-ray, that not only is there no reason to compare, but this could be one of those rara avis releases that causes video-cinephiles to pull the trigger on that new 4k set-up.

With so many current 4k releases, being nothing more than a new-skew up-rez, Alien is the real deal.

As an aside for those who collect interesting slipcovers, this one is a gorgeously produced affair. Get it in the correct reflective light, and you’ll think that Alien blood is seeping out.

No more need be said.

Upgrade from Blu-ray – You Betcha!

Damnit! I was resisting the UHD since the I have the Anthology set - and its Alien disc is pretty good! But it is priced right...

ArnoldLayne said:
Damnit! I was resisting the UHD since the I have the Anthology set - and its Alien disc is pretty good! But it is priced right...
Click to expand...

The price is right indeed! I am not concerned about holding out for a UHD set. I can live with Alien 3 and Resurrection in HD , and who knows when Aliens will get the 4K treatment given James Cameron's history with home video releases...

It sounds like Alien truly is the perfect organism on UHD!

Great to hear. Can’t wait to spin it Tuesday.

...and you guys in the US and Canada get it for under half the price we have to fork out for it in Europe!

I first saw Alien when it was originally released, in a flea pit in Nairobi, Kenya. At the age of 12, I can't for the life of me remember what the film print looked like, as I1d covered my face with my hands for almost the entire film. I have the laserdisc box set and have bought the blu ray twice and I've always thought the picture looked good at the time. However, I remember being distinctly underwhelmed when I saw Alien on a huge cinema screen for the 25th Anniversary in 2004 - the film copy wasn't particularly sharp and the blacks were crushed. This new 4K disc should be a whole new experience.

Excellent! Despite all the sobering and frequently dark news we're exposed to in these modern times, the fact that we can own 'Alien' in 4K HDR on a single 5-inch disk for $14.96, proves that all is not lost, and at least a few things are indeed right with the world.

RAH, any impression on the added bits for the Director's Cut? Digital Bits seems to think they're upscaled from an old 2k done for the 2003 dvd.

Watched mine earlier, as Robert said it looks magnificent this is clearly the current 4K UHD reference for 1979 & most likely the best catalog release for 2019! It just shows you what is possible when the studio wants to & someone is willing to pay for it the end result here is just fantastic & leaves you wanting more of the same high standard!!

The level of detail in the amazing sets, physical ship models & costumes is staggeringly displayed in all its glory. When you see the interactive strobe set lighting FX its just mesmerizing & really places you into the movie. The actors as well all look great thanks to the superb atmospheric detail in their faces & memorable performances they all give. Jerry Goldsmiths incredible score never sounded better & Ridley Scott probably should have got an oscar for his understated but fluid & seamless direction of a talented army of technicians (some did indeed win the oscar but Ridley was snubbed as sci-fi was not something taken very seriously way back then).

This is without a doubt one of the finest sci-fi movies ever made & still highly entertaining no matter how many times you have seen it. The new 4K UHD is so good I watched the entire movie in 1 sitting with my eyes glued to the screen for every single frame! When watching it I felt as though it was made yesterday due to how effective & stunning the presentation is. Its a little sad some of the actors & behind the camera talent are no longer with us but their great work will live on forever in this 4K UHD.

If only we could get more 4K UHD catalog releases like this the format would continue to grow instead of trying to sideline physical discs studios should be trying to produce as many Alien quality transfers for disc as possible because most of the world is many years away from being able to stream this in 4K UHD with HDR!

Is the blu-ray based on the new transfer? Some of us don’t have the capacity to upgrade our equipment at this time...

bgart13 said:
Is the blu-ray based on the new transfer? Some of us don’t have the capacity to upgrade our equipment at this time...
Click to expand...

The Bits reviews says it's the same exact disc from the last box set.

I'll be very interested to get my hands on this one - I noticed in some screen cap comparisons that the new 4K leans away from the "blues" of the bluray variant and more towards black. It also appears that the framing is different as well...shame there's no ATMOS track though.

This seems like it would be made for Atmos with height channels. I'm disappointed with that decision.

We don't know the state of the elements. Maybe it wasn't feasible. It happens.

titch said:
At the age of 12, I can't for the life of me remember what the film print looked like, as I1d covered my face with my hands for almost the entire film.
Click to expand...

I think Ridley would be placed with your review of his film. I was older so I looked more, but you and I had similar reactions.


Paul_Warren said:
Its a little sad some of the actors & behind the camera talent are no longer with us but their great work will live on forever in this 4K UHD.
Click to expand...

Who are the artists who have passed?

I would like to express my gratitude for the trend of releasing outstanding discs of the Alien movies at great prices. I’m thinking of the Anthology and now 4K Aliens. If I recall correctly the anthology was well-priced out-of-the gate.

I actually cancelled my Amazon order when I learned that the 4K was not Atmos. I don't have a 4K display and won't likely get one until my Panny Plasma cashes it in, but do own two 4K players and run a 5.1.4 set-up. If it had an Atmos mix, I was willing to throw down.

I have loved this film since first seeing it during the original theatrical release while I was in high school. At $15, upgrading to the UHD is a no-brainer. I am looking forward to watching this over the weekend.
Last edited: Apr 22, 2019

FOX doesn’t seem to do any Atmos upgrades on most titles. I can’t think of any I know Die Hard 4K was also just 5.1

Thrilled to finally get the 4.1 audio in DTS HD format.

Previously it was only available as lossy Dolby Digital 4.1

From the review at br.com. Do you agree @Robert Harris

I honestly wouldn't be that surprised if the printmasters (both 6 and 2-track) are all that survive for Alien. That was what happened with Close Encounters.
You must log in or register to reply here. 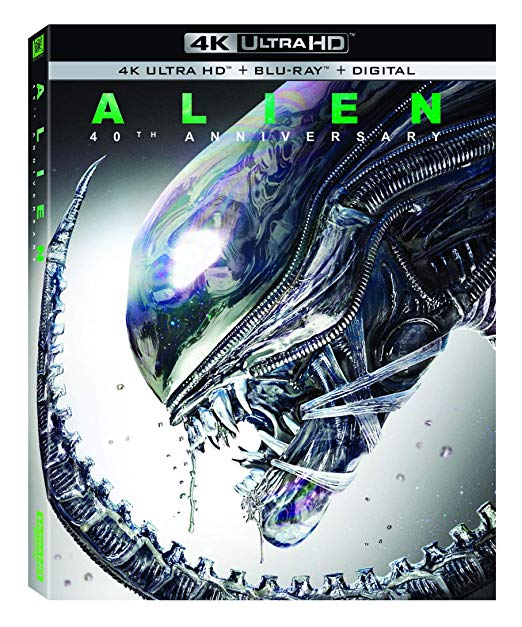