A wonderful set, that has been created for fans of the 91 year-old filmmaker and artist

For those cinephiles who love Hitchcock, Wilder, Wyler, Lean, Ford, and even newer filmmakers still working, who work within a certain framework, Jodorowsky may not be your go-to director.

I hear his name and usually think of Stephen Tobolowsky, a wonderful actor, but a very different person.

In the ’70s and ’80s, when Jodorowsky’s films would play in revival or (especially) on campuses, usually in midnight shows, there tended to be a certain melange of scents wafting through the air.

Filled with Christ-like imagery, and homo-erotica, lots of blood, and more nudity that the Hayes board would have permitted, they’re very special films, but possibly not for the general audience.

A new Blu-ray set has been created and released by ADKCO, and it’s a quality effort that will thrill Mr. Jodorowsky’s fans no end.

I’ve spot checked both El Topo (in 1.37) and The Holy Mountain (scope), and they’re both quite lovely. I did find some color in El Too that was occasionally a bit off, but never anything problematic.

Holy Mountain was fine in all regards.

Matt Zoller Seitz probably says it best. These are “free-association” films. So just go with it.

The films are directed, written by and star Mr. Jodorowsky.

Along with the two previously noted, you also get Fando Y Lis (1968) and Psychomagic, A Healing Art (2019), an interesting doc on the filmmaker.

Again, this is a wonderful set, that has been created for fans of the 91 year-old filmmaker and artist.

For my personal taste. It’s Fellini, Antonioni with a bit of David Lynch thrown in for good measure.

Thanks for taking a look at this - Arrow have also released it in the UK. There are too few cult movies brought to attention on this forum! It really is quite a sensational package from Arrow. El Topo was the first major midnight movie when it payed at New York's Elgin Theatre in January 1971. It is a cult film for a reason: while it attracted repeat viewers (college students, acid freaks and those into "head" pictures), who thought it a masterpiece, more people were irritated by it. I remember Jodorowsky fondly from my student days - El Topo, The Holy Mountain and Sante Sangre were among the most incomprehensible and pretentious films I'd ever seen up to that point. It was a great jumping off board into world cinema. I recently saw the rerelease of Dennis Hopper's The Last Movie - which came out the same year as El Topo - it very obviously was made in the same spirit.

The Holy Mountain is among my favorite films and just overall a unique sort of trip. Not for the faint of heart, but rewarding if you don't mind a little bit of sacrilege and more frontal nudity than a Greenaway film. For the record, I've never taken any mind-altering substances, but this film reminds me of a quote attributed to Salvador Dali - "I do not take drugs, I am drugs!'

I used to own the ABKCO DVD set, which was very good - though, Fando y Lis was a duplicate of the ancient Fantoma DVD. The then-new remasters of El Topo and The Holy Mountain looked great on DVD, but those masters didn't hold up as well on their Blu-ray reissues. Worth noting that The Holy Mountain was shot in Techniscope rather than anamorphic. This set is also Region A/B - ABKCO handling the North American distribution, Arrow Video (who produced the set and new 4K remasters) in the UK.

Robert Harris said:
For my personal taste. It's Fellini, Antonioni with a bit of David Lynch thrown in for good measure.
Click to expand...

Myself as well. Looking forward to the Fellini Blu-ray set later this year, particularly "Juliet of the Spirits" which I saw first release at the Village Theater in Claremont, California. Saw "Blow Up" there too.
Reactions: Patrick McCart

As for David Lynch, "Wild at Heart" comes to mind. At the showing we attended, a few people who made it all the way through exited the theater exclaiming: "What the hell was that?" We loved it, however. Our first Willem Dafoe performance.

I compared the Arrow transfers with the restored ABKCO blu rays of The Holy Mountain and El Topo from 2014. There is a big difference between Arrow's new 4K restorations and the ABKCO transfers, particularly regarding DNR, which the Arrow doesn't have. The ABKCO of The Holy Mountain had speckles and scratches on it too. I also checked out the 2011 US Severin blu ray of Santa Sangre - that one looks pretty awful now.

The bar has been raised high with 4K scans of films in the last few years. At this stage, I think just about any blu ray older than five years old, is going to risk looking lousy when projected. I'm pretty sure I've replaced close to 20% of the blu rays I've purchased since 2007.
Reactions: Patrick McCart

SANTA SANGRE "incomprehensible"? The film, for all it's surreal flourishes, actually has a pretty straight-forward storyline (inspired by an actual case, no less). I love that film, it's easily my favorite Jodorowsky film. Severin is supposed to be putting out a 4K remastered version at some point.

Vincent_P said:
SANTA SANGRE "incomprehensible"? The film, for all it's surreal flourishes, actually has a pretty straight-forward storyline (inspired by an actual case, no less). I love that film, it's easily my favorite Jodorowsky film. Severin is supposed to be putting out a 4K remastered version at some point.

Well Vincent, as a student, I rarely watched midnight movies, such as these, without ample "refreshment". Probably did as much to impair my ability to work out what was going on, than Jodorowsky's plot and dialogue. But having said that, I saw Arrow's El Topo again last night with two friends from student days. There were still portions of the plot that were pretty incomprehensible, but the film is still quite unique, after all these years. Certainly not dull. And the transfer is absolutely gorgeous. We tried a few minutes of the Severin Santa Sangre blu ray afterwards, but the quality was too shabby, after watching El Topo.
Reactions: lark144 and Vincent_P
You must log in or register to reply here.
Share:
Facebook Twitter Reddit Pinterest Tumblr WhatsApp Email Link 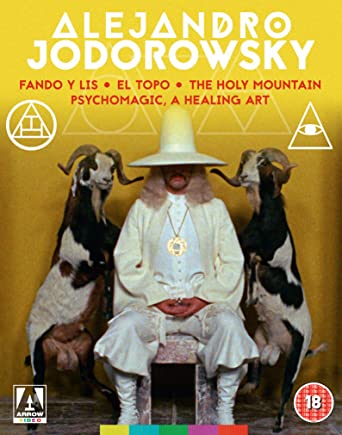