Forum List What's new Dark Style Change width
Log in Register
What's new Search
Menu
Log in
Register
Navigation
Install the app
More options
Dark Style
Close Menu
Posted on January 18, 2021 by Robert Harris
You are using an out of date browser. It may not display this or other websites correctly.
You should upgrade or use an alternative browser.

Directed by W.S. Van Dyke directed the first four. He passed away in 1943.

With an image harvested from a nicely produced fine grain master, Warner Archive’s new Blu never looks less than a proper 35mm print in projection, and is a pleasure to watch

Hopefully, Warner will pick the films in this series off one by one to replace the original DVD boxed set.

Yet another wonderful film that belongs in every serious collection.

And as everyone knows, William Powell did not play the thin man.

For those who like to deep dive, here’s an interesting artifact: 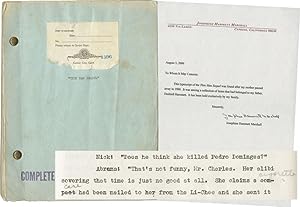 Robert Harris said:
Hopefully, Warner will pick the films in this series off one by one to replace the original DVD boxed set.
Click to expand...

That's what I am hoping as well.

Marcel H. said:
That's what I am hoping as well.
Click to expand...

and before I even opened this thread, how did I know that this release would be in a word, perfect!
Last edited: Jan 16, 2021

The shipping rate is reasonable for the interesting artifact featured in RAH's A Few Words...

bujaki said:
The shipping rate is reasonable for the interesting artifact featured in RAH's A Few Words...
Click to expand...

Agreed, but as there is one comma before the decimal point - I have to say I'm out . I haven’t picked it up yet, but it’s a rare WA release that has me thinking about picking it up outside of a 4/$44 sale, especially with the great job they did on the first one. I wish they’d done a set, but I’ll get them one-by-one if that’s what it takes. My copy came today from Amazon. Will be watching most anxiously tonight, pretty much knowing I'm going to love it.
P

At this moment in WAC’s history, we are very much blessed to have gotten this far.

Short of that, I agree with your suggestion.

Isn’t it great that it seems that Amazon or other direct sellers pretty much got all these fabulous titles delivered on release day. I don’t think this has happened, at least for me, since last May.

Watched tonight, pretty much in complete ecstasy. The DVD of this was never in as bad a shape as the first Thin Man, but this looks as pristine as it's possible for a black and white movie to look. Some of the gowns on the ladies are absolutely stunning.

Bring on the rest, PLEASE!

I watched the DVD on New Year's Eve, as I couldn't wait for the Blu-Ray, which is finally weaving my way through the vortex of USPS. The contrast and the clarity was excellent. The quality of the black and white even held a glimmer of that nitrate warmth. The only thing missing was resolution and detail, which I imagine the Blu-ray has on the highest level.
You must log in or register to reply here.