Forum List What's new Dark Style Change width
Log in Register
What's new Search
Menu
Log in
Register
Navigation
Install the app
More options
Dark Style
Close Menu
Posted on September 22, 2019 by Robert Harris
You are using an out of date browser. It may not display this or other websites correctly.
You should upgrade or use an alternative browser.
4 Stars

The Great Roger Corman’s 1959 A Bucket of Blood, is being released by Olive, and it’s nice to see them bringing out product, as they always do a great job with extras. Their special editions are special.

Mr. Corman, who should be known to most of you, either produced, directed, wrote, or acted in well over a dozen films in a career of seven decades.

A Bucket of Blood, comes earlyish on, before his Poe comedy/horror series, which began with House of Usher in 1960 – the same year as The Little Shop of Horrors.

Shout’s new Blu-ray is a quality affair, noted to be mastered from “a new 4k scan,” of something – presumably a fine grain.

Rumor has it that the film was made in five days, written in one, so be prepared for low-budget – and fun.

Dave B Ferris said:
Olive or Shout?
Click to expand... 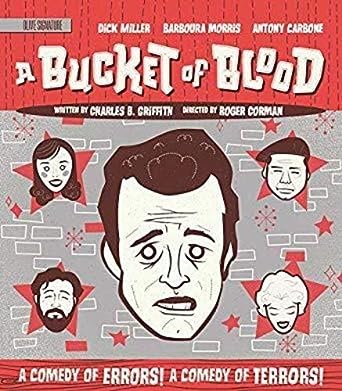 Now if we could just convince Roger Corman to remaster & release The Lady In Red (1979) on Blu-ray.

Now if we could just convince Olive to release Phase IV with special features and the original ending that Saul Bass envisioned, I'd be a happy camper.

I have 2 versions of this movie on DVD.

So, my question is...what version is on the new Olive release?

John Sparks said:
So, my question is...what version is on the new Olive release?
Click to expand...

Thanks! I still wonder where Film Chest got their print from? And why would the aspect ratio close and open at the end?
You must log in or register to reply here.