The rise and fall of a megalomaniacal media star is captured in electrifying detail in Elia Kazan’s A Face in the Crowd.

The rise and fall of a megalomaniacal media star is captured in electrifying detail in Elia Kazan’s A Face in the Crowd. With a scathingly satirical script by Budd Schulberg and a clutch of unforgettable performances, A Face in the Crowd is now not only more biting and powerful than it has ever been, but it is also quite eerily prescient about the nature of celebrity and its undeniable hold on the consciousness of our country’s populace.

Ambitious, young, and lovely radio producer Marcia Jeffries (Patricia Neal) finds a hungover rogue named Larry “Lonesome” Rhodes (Andy Griffith) in an Arkansas drunk tank and puts the charmer with a certain cunning cracker appeal on the air. Soon, Rhodes’ popularity in a small Arkansas radio market brings him to the attention of a Memphis television producer, which he subsequently parlays into national network television stardom that he uses to popularize a faltering vitamin pill and eventually to endorse a weedy presidential candidate (Marshall Neilan). But as his star rises ever higher, Rhodes’ ego, arrogance, and endless womanizing threaten his rise to the top.

Having already written a scathing look at a show business hotshot run rampant in What Makes Sammy Run, Budd Schulberg has here adapted his novella The Arkansas Traveler with a similarly downbeat fascination with another charming heel who climbs high only to be undone by his own uncontrolled ego. Rhodes’ steady climb to the top is a fascinating one, accomplished by fashioning a homespun, plain talking good ol’ boy character which the public laps up by the millions and letting him wheedle his way into the hearts of Americans while selling them a vitamin pill that contains a bit of aspirin, a little sugar, and not much else (much like his own personality) while quietly taking what he wants (money, power, and position) in the process. Director Elia Kazan captures it all in sometimes brutal close-ups as our power-hungry star brays his overloud laugh in our faces and croons a tune or two in his twangy Southern accent. Ratings swell and vitamins fly off the shelves (Rhodes’ rising popularity is captured in a brilliant montage showing the cresting sales of the pill and its pusher). Despite its acutely on-point satire on advertising and television’s power to create celebrities who may or not be good for us in the long run, the film has some strange little anomalies. Scenes sometimes end with abrupt fadeouts, and secondary characters like Anthony Franciosa’s Joey DePalma or Walter Matthau’s Mel Miller get somewhat left behind without the development that would have greatly enriched the entire film experience. Kazan and Schulberg did a more thorough job with characterization in their Oscar-winning prior film On the Waterfront. The ending also drags itself out five or ten minutes too long: the lengthy elevator ride down to the bottom floor as the public reacts to Rhodes’ betrayal says all that needed to be said about his ultimate fate.

Having made a name for himself as a stand-up comic and a fine comedian in No Time for Sergeants, Andy Griffith’s full force as a dramatic actor comes blazingly forth playing Larry “Lonesome” Rhodes. Utilizing his natural Southern charm with daggers shielded from view and venom just behind his mouthful of teeth, Griffith never again reached so deeply within himself to play a role, but his “Lonesome” Rhodes is nevertheless unforgettable. Patricia Neal beautifully plays a warm-hearted but vulnerable Southern girl who loves this heel in spite of herself. Anthony Franciosa’s ambitious agent Joey DePalma is a mini-Sammy Glick in training while Walter Matthau’s shambling writer Mel Miller is likable and appealing. In smaller roles, Lee Remick’s debut as baton twirler supreme Betty Lou Fleckum offers more visual than dramatic appeal, but Kay Medford has a memorable sequence as Rhodes’ grasping first wife.

The film’s original theatrical aspect ratio of 1.85:1 is faithfully presented in a 1080p transfer using the AVC codec. Having been taken from the camera negative and mastered in 4K resolution, the image is sparkling clean and unquestionably beautiful. Grayscale is masterful with deep black levels and clear, clean whites. There are no signs of age-related anomalies like dust specks, dirt, and debris. The movie has been divided into 34 chapters.

The uncompressed PCM 1.0 sound mix is certainly era-appropriate. Dialogue, Tom Glazer’s music, and sound effects have been combined to balanced perfection here. There are no age-related problems with hiss, crackle, flutter, or hum.

Film Analysis (20:43, HD): Elia Kazan expert Ron Briley analyzes the film with an emphasis on where it fell during the director’s Hollywood career.

Facing the Past (29:10, HD): 2005 documentary on the production of the movie with film historians Lee Braudy and Jeff Young along with video interviews with stars Andy Griffith, Patricia Neal, and Anthony Franciosa, and writer Budd Schulberg.

Enclosed Booklet: in addition to information on the audio and video transfer and the cast and crew lists, the twenty-nine page booklet contains essays on the film, the screenwriter, and its one-of-a-kind star, and an excellent selection of stills from the movie.

A Face in the Crowd was not a popular success on its first release. Perhaps the public didn’t want to be reminded that they could be easily so manipulated by a charming smile and a folksy demeanor; perhaps its release came too soon after a similarly-themed movie drama The Great Man also exposed a popular star as an unrepentant heel. Regardless, the movie stands today as a beacon of unblinking satire warning us of the manufactured demagogues who can mesmerize and tantalize us while stealing our very souls at the same time. Highly recommended!

Received this last week. Amazing film. Great transfer. Thanks for the review.

Interesting to see the dramatic depths that Andy could achieve. First rate performance.
Reactions: Darby67, Tina_H_V, PMF and 2 others

Will upgrade to blu during the B&N Criterion sale (assuming there still will be one!)
Reactions: Darby67 and Flashgear

Excellent review once again, Matt. I look forward to purchasing this at the next Criterion flash sale or B&amp;N 50% off Critierion sale.
Reactions: Tina_H_V, PMF, Flashgear and 1 other person

Randy_M said:
Will upgrade to blu during the B&N Criterion sale (assuming there still will be one!)
Click to expand...

You think the change in ownership at B&N might impact those sales?

Great review Matt...I love this film...between A Face in the Crowd and Sweet Smell of Success, I can't decide which of them I love more...and thus, for me at least, which one is the best American film of 1957...a very strong year overall. Thanks to Criterion, I now have both on beautiful Blu-rays!
Reactions: Darby67, PMF, JohnMor and 1 other person

You said it! They make a great looking pair of Criterion black and white Blu-rays!
Reactions: Darby67, Tina_H_V, PMF and 1 other person
T

Barnes and Noble 50% off Criterion sale starts June 28 per posts on many boards who claim to have seen store signs. Runs through August 4 they say.
You must log in or register to reply here.

The absolute best 3D Blu-ray Disc that you can buy! 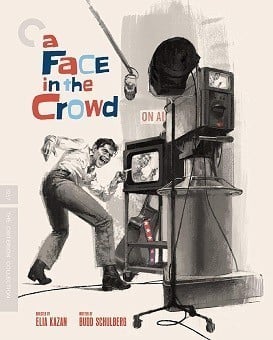