A Dog’s Journey asks a lot from its viewers, most of all that dogs can be re-incarnated if given a task like protecting a grand daughter. A sequel to A Dog’s Purpose (which this reviewer has not seen), the movie was an unexpected tearjerker.

Bailey (voiced by Josh Gad) is getting along in years, but still very faithful to his owner, Ethan (Dennis Quaid) and wife Hannah (Marg Helgenberger). Hannah’s daughter, Gloria (Betty Gilpin), recently lost her husband in a car accident while pregnant with their daughter CJ. Ethan and Hannah have opened up their farmhouse to Gloria, offering her room and board while raising CJ. Bailey quickly takes to CJ, playing with her and protecting her when she walks into a bull’s pen. But Gloria is self-absorbed, looking only after herself while trying to jumpstart her singing career. After a major disagreement, Gloria leaves the farmhouse with CJ, causing a rift in their relationship with Ethan and Hannah. Ethan tasks Bailey with looking after CJ as she soon dies of old age, only to be reborn as a Beagle puppy named Molly ten years later. CJ (Abby Ryder Fortson) secretly adopts Molly without Gloria’s knowledge – she’s too busy drinking and dating abusive and exploitative men.  Teenage CJ (Kathryn Prescott) almost follows in her mother’s footsteps, falling for an older and possessive boyfriend, Shane (Jake Manley), who later stalks her and causes her to flip her car, leaving CJ unscathed but killing Molly in the process. A few years later, CJ has moved to New York hoping to follow her dreams of being a singer-songwriter, only to cross paths with a reincarnated Bailey, who is now a terrier by the name of Max. Max looks out for CJ, and even plays matchmaker with CJ’s childhood friend Trent (Henry Lau), also now living in New York.

I went in to A Dog’s Journey not knowing much about it, and was our choice as a family movie night with my wife and our ten-year old niece. We were not expecting the re-incarnation gimmick, and had a difficult time explaining that to our niece. We also were not expecting this to be a tearjerker, with Bailey dying not once, not twice, but four times! Director Gail Mancuso, better known for directing episodic television like Modern Family and the Roseanne reboot, manipulates her audience quite well, causing them to fall in love with each iteration of Bailey, and Josh Gad’s voice-over helps to pull on those heartstrings. I’ve always liked Dennis Quaid, and its good to see him acting again instead of doing insurance commercials. I find the PG rating almost surprising considering some of the themes explored in the film (alcoholism, stalking, etc.), which caused for more discussion with our niece. Another complaint is the human characters, which are either good or bad, and no in-between (although Gloria does make a change from bad to good). A Dog’s Journey isn’t a bad movie, it’s a mediocre one that successfully manipulates its audience.

I’ve said it many times, but Universal continues to put out stellar Blu-ray of its movies, and A Dog’s Journey is no exception. Colors are naturally rich and vibrant. Contrast provides deep blacks with excellent shadow detail while also providing bright whites without any evidence of clipping. Fine detail is also excellent, from the minute strand of hair in the dog’s fur to the blades of grain in the wheat field. There are also no obvious compression artifacts to be found.

Universal has included a Dolby TrueHD 7.1 track that is quite effective, although never really pushes the limit for a 7.1 track (it almost sounds like a 5.1 track upscaled to 7.1). This is a dialogue-heavy film, and the track handles it with care, with every word clear and understandable. Surrounds are used for music extension and atmospheric effects, such as crowd and street noise once we arrive in New York City.

Deleted and Extended Scenes (1080p; 10:32): Nine scenes are included – It’s Gonna Work, A Song for Molly, You Can Stay Here, Just Do the Laundry, Let’s Get Started, Gloria Looks at Henry’s Things, This Place is Huge, It’s Really Happening and I’ve Loved You Forever.

Gag Reel (1080p; 7:00): In addition to flubs and babies and dogs not behaving, this blooper reel also includes before and after effects comparisons.

Audio Commentary with Director Gail Mancuso: The director goes into much detail about making the movie and the themes it explores.

DVD Copy: The movie in 480p with Dolby Digital 5.1 audio, plus all of the special features listed above.

Digital Copy: An insert contains a code to redeem a digital copy  on Movies Anywhere.

UPHE Rewards Code: On the flip side of the Movies Anywhere code is a code to redeem a free digital movie from a selection of six different films. As of this review, some of the selections included the 1931 classics Frankenstein and Dracula.

A Dog’s Journey asks a lot from its viewers, most of all that dogs can be re-incarnated if given a task like protecting a grand daughter. A sequel to A Dog’s Purpose (which this reviewer has not seen), the movie was an unexpected tearjerker. The presentation is excellent, and the extras are satisfactory.

It's too bad, Todd, that you didn't have the opportunity to see A Dog's Purpose before seeing A Dog's Journey.

Seeing a film's sequel first isn't usually the best way to fly. I read the books first and was so engaged in the original book that I was absolutely thrilled to find that the author had written a sequel and the original story was continued.

In no way can I guarantee that your opinion on the film and its themes would be any different if you had seen the original film first, but maybe.

Your premise that the movie wants the viewers to believe that dogs can be reincarnated if given a specific task isn't really true. The films/books do tell the story that dogs (such as Bailey) are reincarnated and come back as other dogs--but it's not really predicated on anything done by a human.

I believe we are supposed to think that Bailey is in a unique situation in that Ethan has caught on that the dogs in his periphery all seem to have a common knowledge of the original Bailey's experiences.

In these two films, Bailey is trying to suss out his "purpose" in life (in a rather philosophical way) and after believing that he discovered it, continued to get a better understanding of what his actual purpose was after living more lives and being able to remain intertwined with the same human characters.

And I'm a little surprised you'd not be thinking that a dog movie is going to be a tear-jerker. It's hard for me to think of one that isn't. A Dog's Purpose/Journey, The Art of Racing in the Rain (in which the dog fancies he might be reincarnated as a human--after he watched a documentary on TV about Mongolia!), Hachi: A Dog's Tale, The Adventures of Greyfriars Bobby, The Incredible Journey/Homeward Bound, Old Yeller, etc.

I haven't cracked open my copy of Dog's Journey yet, but am thrilled you are so keen on the treatment it was given by Universal. 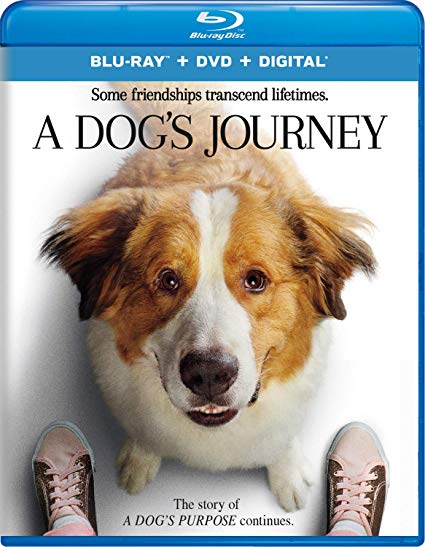