Forum List What's new Dark Style Change width
Log in Register
What's new Search
Menu
Log in
Register
Navigation
Install the app
More options
Dark Style
Close Menu
Posted on February 19, 2020 by Todd Erwin
You are using an out of date browser. It may not display this or other websites correctly.
You should upgrade or use an alternative browser.
Strange but emotional journey 4 Stars

Based on the 1998 article published in Esquire magazine, Can You Say… Hero? by Tom Junod, A Beautiful Day in the Neighborhood is a strange but emotional journey of a journalist’s path to forgiveness, with help from an unlikely new friend.

After getting into a fist fight with his estranged father Jerry Vogel (Chris Cooper) at his sister’s second wedding, investigative journalist Lloyd Vogel (Matthew Rhys) is assigned to write fluff piece by his editor (Christine Lahti) on children’s television show host Fred Rogers (Tom Hanks). Lloyd grudgingly takes the assignment as his wife warns him not to ruin her childhood. What starts out as just a brief interview for an article on modern- and every-day heroes evolves into a friendship, with Fred Rogers helping Lloyd deal with being a father and eventually forgive his abusive and critically ill father.

The marketing of A Beautiful Day in the Neighborhood played much more emphasis on Fred Rogers, downplaying the heart and soul of the film, which is Lloyd’s journey to forgiveness. I can understand that, as that is a much tougher sell to ticket buyers, especially when you have Tom Hanks playing Mr. Rogers. Hanks is excellent (as always) in another Oscar-worthy performance, not portraying a caricature of the man but embodying the man himself. Rhys is no slouch, either, delivering a performance that has a great deal of pain and anger just under the surface, ready to boil over at any moment. The two men are an unlikely pair at the outset, but by the end, you can see the respect they have for each other. This is not what I would call a mainstream studio picture, though. Director Marielle Heller (Can You Ever Forgive Me?) makes some odd stylistic choices that may put some people off, such as framing the film around an episode of Mr. Rogers’ Neighborhood and creating miniatures similar to those used on the now-classic PBS children’s show as transitional pieces from one location to another. These may seem strange at first, but do begin to make sense as the film comes to its conclusion. Viewers may also be disappointed that the film does not really delve into the life of Fred Rogers and instead is centered around Lloyd, and for those I recommend watching the documentary Won’t You Be My Neighbor? as the second bill of a double feature with this film.

A Beautiful Day in the Neighborhood is a strange and confusing release on UHD. The movie was captured in 1080p resolution (with some Super 16mm footage mixed in) with Arri Alexa Mini cameras, then completed as a 4K digital intermediate. For this UHD release, Sony has added HDR10 high dynamic range and IMAX-Enhanced certification. The lower resolution cinematography was likely a stylistic choice by director Marielle Heller to lend some authenticity to the overall look of the film, but viewing this film in UHD with HDR (plus the IMAX-Enhanced certification) almost feels like overkill. The increased bitrate and resolution do help to resolve some of the blooming artifacts I experienced on the 1080p Blu-ray, and colors are a bit more subdued on the UHD. However, there is no real noticeable increase in detail, likely due to the lower resolution source material. The image on the UHD is soft overall, and noticeably darker than the Blu-ray. Neither the Blu-ray nor the UHD provide a film-like presentation, even the “real-world” sequences have a definite video look to them.

As part of the IMAX-Enhanced certification, Sony has included a DTS:X 12.1 default track (which is DTS-HD MA 7.1 compatible). This is a very dialogue-driven drama, so the 12.1 track mix is, again, overkill for this type of film, but it does offer a bit more immersion than the DTS-HD MA 5.1 track on the Blu-ray in the way of ambient and atmospheric effects, such as reverb during the wedding reception and the sounds of crickets during a quiet family gathering at Jerry’s house late in the film. There is also a recurring sense of ear-ringing, as if Lloyd is suffering from tinnitus that is more prevalent in the DTS:X mix. Dialogue is clear and understandable throughout, directed mostly to the center channel.

Audio Commentary with Director Marielle Heller and Director of Photography Jody Lee Lipes: Heller and Lipes have a lively discussion on creative choices made for the film and other tidbits of trivia.

Deleted & Extended Scenes (1080p; 16:45): Eight scenes are included – Heroes Must Die; You Just Had a Full Interview; Mr. Rogers’ Archives; A Trip to the Hospital; Are You Still Feeling Agitated?; Did You Know About Me?; I Asked for Two Paragraphs; Mitzi.

Blooper Reel (1080p; 1:38): Tom Hanks struggles to get through the opening song from Mr. Rogers’ Neighborhood.

Tom Hanks as Fred Rogers (1080p; 10:29): The real title to this featurette is Everybody’s Neighbor: Fred & Tom, which looks at Hanks’ preparation and performance as Fred Rogers.

Dreaming Big, Building Small: The Puppets and Miniatures (1080p; 8:37): A look at the meticulous recreation of building the puppets and miniatures from scratch.

Daniel Tiger Explains: Practice Makes Perfect (1080p; 2:42): A repurposing of the Blooper Reel from above with an introduction by Daniel Tiger and interview footage of Tom Hanks.

A Beautiful Day in the Neighborhood may have been marketed to believe is was a biography on Fred Rogers, but instead is a strange and emotional journey of a journalist’s path to forgiveness. Solid performances all around, but I wouldn’t exactly consider this film a candidate for 4K UHD release, and the IMAX-Enhanced certification seems a bit pointless.

I think the real strength of this film is that it's not about the life of Fred Rodgers.

I have to give an amazing amount of credit to the writers and producers for thinking out of the box on this one.

They managed to celebrate the life of Mr. Rodgers without doing a biography.

Looking at the cover this might be a sequel to Forrest Gump. Fred Rogers was/is unknown to us in the UK.

Too bad Eddie Murphy didn’t get this role.

A Beautiful Day in the Neighborhood UHD Review 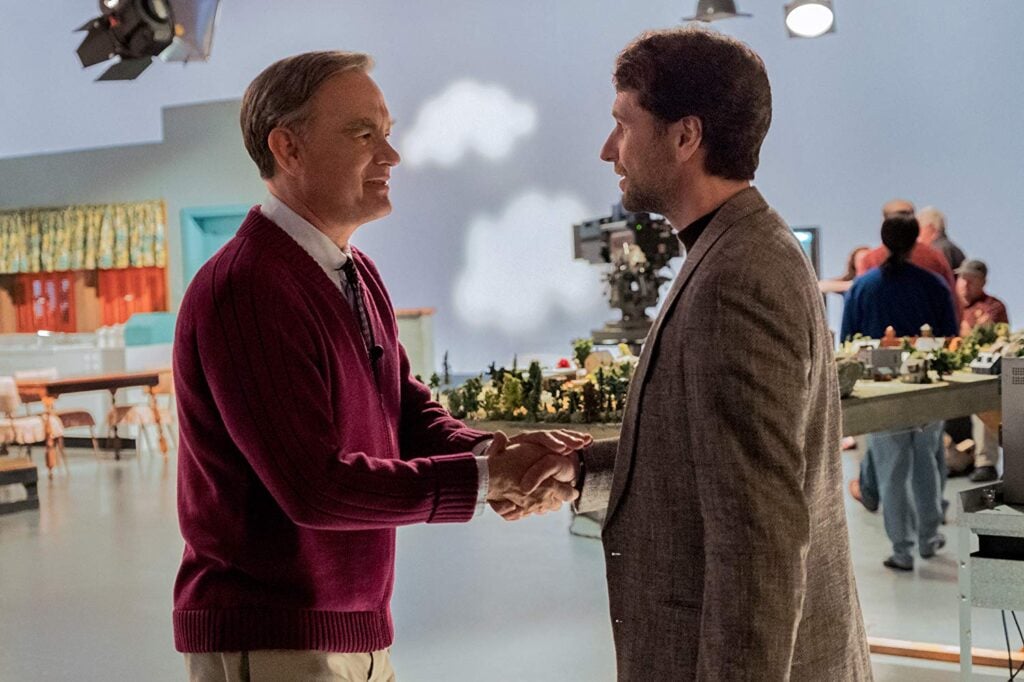 Thank you for your review, Todd! This film and story is so American, that it is not getting a Scandinavian release - even the UK's The Guardian's chief critic, Peter Bradshaw, started his review saying," Has anyone in Britain ever heard of Fred Rogers?" - and on his next paragraph, "I had never heard of Rogers before this film". I purchased the 4K UHD based on your review and saw it last night. As someone totally unfamiliar with Fred Rogers, I didn't have the background of warm nostalgia that American audiences have. I didn't read the Esquire cover story when it was originally published, because I had no familiarity with the man; the 10 000 word profile sort of requires that. While watching the movie, I found the three-act arc between the cynical, depressed journalist and Tom Hanks to be very traditional and predictable. I also sat there thinking that this was a very odd release for a 4K UHD - the picture quality is pretty terrible (I think you are rather generous, scoring the picture quality 3.5/5)! It's a Sony release, so I was expecting something really stellar. I even took the disc out a couple of times to compare to the blu-ray. I get that they made the film to be like one of those TV episodes, but it didn't really work as a 4K UHD.

However, today I read The Esquire article

and I have a much deeper appreciation of the story in the film - which had a lot of truth in it. The best and most moving scene in the film: the moment when the kids on the New York subway spot Mr Rogers and start singing his theme tune to him, with adult passengers and cops joining in, actually happened once to Fred Rogers!
You must log in or register to reply here. 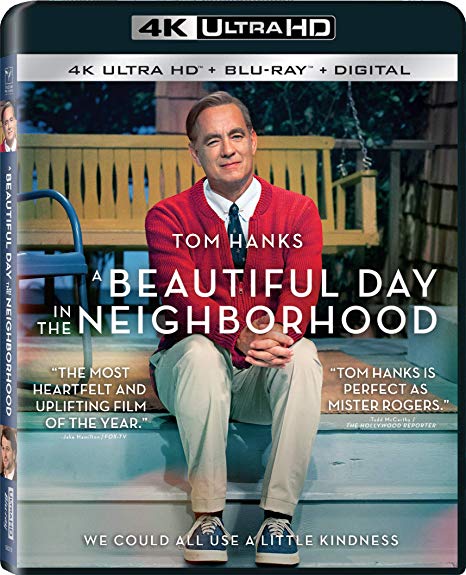