Phil Karlson’s 99 River Street is a tough, terse little film noir with enough unique touches and a cast of sterling players that elevate it above its meager budget and backlot sensibilities into a forceful and dynamic crime melodrama.

In the cinematic world of film noir, there are the top tier titles that most everyone interested in the genre knows about: The Maltese Falcon, The Big Sleep, Murder My Sweet, Gilda, Night and the City and so many others, and then there are the second tier titles that are much less well known except with the true noir aficionado. Phil Karlson’s 99 River Street is one of the latter: a tough, terse little noir with enough unique touches and a cast of sterling players that elevate it above its meager budget and backlot sensibilities into a forceful and dynamic crime melodrama.

After losing the heavyweight championship and injuring his eye to put a permanent end to his ring career, Ernie Driscoll (John Payne) has spent the last four years driving a taxicab in New York City. Wife Pauline (Peggie Castle) has long since given up her dreams of fancy gowns and swank apartments from Ernie, but her disillusion with her marriage has led her to become involved with smalltime hood Victor Rawlins (Brad Dexter) who’s on the verge of scoring a $50,000 windfall from a diamond heist. On the longest night of his life, Ernie sees his wife in the arms of her lover and then almost immediately has a dastardly trick played on him by an actress acquaintance of his Linda James (Evelyn Keyes) who’ll do almost anything to land a lead in a Broadway show. Fed up with his life, Ernie is determined to revive his ring career when he and Linda discover the body of his wife in the backseat of his taxi, dumped there by Rawlins when his diamond fence Mr. Christopher (Jay Adler) backs out of the money deal since there was a woman involved. With the police on his trail and only Linda and his taxi dispatcher Stan Hogan (Frank Faylen) as people he can depend on, Ernie must learn the identity of Pauline’s lover and find some way to prove to the police he had nothing to do with his wife’s murder.

Robert Smith’s screenplay crams a great amount of action and excitement into a tension-filled eighty-three minutes while allowing each of the main actors to have performance moments in the spotlight that show the world what they can do. Director Phil Karlson gets the movie off to a rocking start with a wonderfully staged title fight that shows us how Ernie came so very close to becoming the heavyweight champion, and from then on, the action is hot and heavy throughout (with several allusions to Ernie’s final fight in pugilistic face-offs with bad guys Brad Dexter and Jack Lambert who plays the muscle for the diamond fence), and there are more than a few surprises along the way including the fake-out Linda pulls on Ernie that leads the audience early-on into thinking the story was going in one direction while actually something else entirely is afoot. Karlson’s shooting of the movie throughout is exemplary with unusual compositions, two shots that reveal one character’s superiority over another, and repeated motifs that ring true in the viewer’s mind’s eye (the early image of battered fighter Ernie sagging on the ropes is repeated at the film’s climax when Ernie falls into a rope chain with the same grimace on his face we saw earlier). Only some shaky, obviously phony matte work once we get to the 99 River Street location betrays the film’s small budget, but otherwise the movie’s wet streets, neon signs, focus on mobsters, and women gone bad all reflect one of the most famous of movie genres.

This is among the greatest of John Payne’s film performances. He had played a boxer in a couple of films early in his career, but his face now shows the age-advancing effects of ring wear on a man, and combined with his double-sided personality: gentle and sentimental on the one hand, hair-trigger murderous temper on the other, his portrait of a man tired of settling for second place retains audience sympathy throughout, even when he’s rough on those who care for him the most. Evelyn Keyes gets a couple of real showcase moments (which obviously convinced her the more male-dominated movie was worth doing). While she sometimes acts a bit too self-consciously at any given moment (too busy with her eyes in quiet scenes, overdoing the mounting hysteria in her “audition” scene even though the director tells her how brilliant she was), she emerges as a “good egg” in the movie, willing to go to bat (and even the extra mile) for a man she wronged. Frank Faylen is the very definition of a best friend always ready to lend a helping hand with no questions asked and fully committed to friendship even against the police. Brad Dexter is extremely impressive as the slimy hood using women and discarding them like dirty tissues while Jack Lambert and Jay Adler match him in corruption and malice with arresting performances. Peggie Castle has some fine scenes as the nagging wife distraught at missing the big money when her husband doesn’t claim the championship and now determined to get those furs and jewels any way she can.

The film’s original theatrical aspect ratio of 1.37:1 is faithfully rendered in 1080p using the AVC codec. Sharpness is at acceptable levels throughout with enough detail to be seen in close-ups though some may find certain shots softer than they needed to be. The grayscale boasts some good black levels and crisp whites with decent shadow detail. Contrast has been decently applied even when the extra resolution betrays some of the movie tricks that are meant to add dimension to what was essentially a backlot movie. But age-related problems are certainly present: some dust, debris, and spotting make fleeting appearances, and there is occasional contouring around the edges that distract momentarily. The movie has been divided into 8 chapters.

The DTS-HD Master Audio 2.0 mono sound mix does a fine job representing the single channel soundtracks of the era. Dialogue is always easy to understand, and the music by Emil Newman and Arthur Lange is professionally combined with atmospheric effects appropriate to the locales in the movie. No age-related problems with hiss or crackle are present in the transfer.

Audio Commentary: noir expert Eddie Muller provides a lively and enthusiastic commentary never failing to point out both strengths and weaknesses in the material and revealing some special memories of Evelyn Keyes whom he knew personally.

Promo Trailers: Hidden Fear, Shield for Murder, He Ran All the Way

99 River Street is a strong and surprisingly entertaining film noir, much less famous than some of its more highly regarded brethren and yet in many ways every bit as entertaining in its own modest way. While the Kino Lorber Studio Classics Blu-ray release isn’t revelatory in its audio and video quality, it’s still the best the movie has ever looked on home video.

That pic is from Kansas City Confidential...

Cranston37 said:
That pic is from Kansas City Confidential...
Click to expand...

Thanks for pointing out the slip-up. I've tried something else. 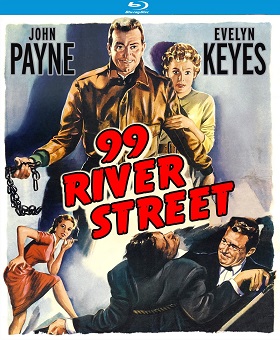