Forum List What's new Dark Style Change width
Log in Register
What's new Search
Menu
Log in
Register
Navigation
Install the app
More options
Dark Style
Close Menu
Posted on October 4, 2016 by Matt Hough
You are using an out of date browser. It may not display this or other websites correctly.
You should upgrade or use an alternative browser.
Still funny, still pertinent office satire 4 Stars

A satirical farce of uncommon intelligence and foresight, Colin Higgins’ 9 to 5 seems even more impressive today than it was in 1980 when it premiered to lukewarm critical response but huge box-office returns.

A satirical farce of uncommon intelligence and foresight, Colin Higgins’ 9 to 5 seems even more impressive today than it was in 1980 when it premiered to lukewarm critical response but huge box-office returns. Its humorous but pointed portrayal of overworked and underappreciated office workers is still readily identifiable to a majority of moviegoers, and its buoyant sense of humor and wonderful performances keep things bubbling along even when some narrative detours don’t work quite as well as others. Despite changes in technology and political correctness that permeates society to its core, 9 to 5 is always a welcome diversion.

Dictatorial vice-president at Consolidated Technologies Franklin Hart (Dabney Coleman) is the very definition of a male chauvinist pig. He steals ideas from his office supervisor Violet Newstead (Lily Tomlin) and passes them off as his own without ever promoting her, makes continual sexual overtures to his voluptuous but happily married secretary Doralee Rhodes (Dolly Parton), and bullies inexperienced workers like recently divorced-and-back-to-work Judy Bernly (Jane Fonda) for making the smallest mistakes. The ladies might fantasize about offing the boss, but they’d never seriously consider doing it even when Violet inadvertently puts rat poison in Hart’s coffee. Though he escapes that innocent mistake unharmed, when he learns what they had done, he now has something to hold over their heads for blackmail, something none of them will stand for any longer, so they hogtie him, take him home while his trusting wife (Marian Mercer) is out of town on a month-long cruise, and continue to run the office without him while they gather their evidence together to bring him down for real.

The dark original story and screenplay by Patricia Resnick was later adapted by director Colin Higgins to lighten its tone and add some more clearly farcical elements. Even with the sequences where comic invention is spotty (the entire hospital sequence where the ladies go to confiscate what they think is Hart’s body and take another by mistake), the film is loaded with big laughs. High on pot, the three office workers bond as they fantasize about ways they could rid themselves of their egotistically disgusting boss, and each one is a gem: Fonda’s Judy as a big game hunter bringing down the office ass, Parton’s Doralee as a chauvinistic boss and rodeo wrangler hogtying the stubborn heifer, and Tomlin’s malevolent Snow White plotting her own kind of retribution. The fantasies while entertaining on their own and beautifully directed by Colin Higgins also become prescient in ways the ladies wouldn’t ever have expected as they maneuver the ins and outs of their office situation as the film runs: Hart is almost poisoned, he is eventually hogtied, and he is used as a gun target as the women prove themselves capable of far more than they would have ever dreamed. The satirical bent to the film works beautifully later on when the changes the plotting trio institute in office management during Hart’s imprisonment make the office more efficient and more inviting as a workplace (there’s a jab about the big boss shooting down the idea of equal pay, still a sore spot in the business world more than three decades after this film opened). Watching this comedy with 21st century eyes shows both how far we’ve come and how far we’ve yet to go.

Lily Tomlin and Dolly Parton couldn’t be more perfect in their roles: Tomlin the office whiz who is the brains behind the throne and Parton the kewpie doll-like secretary with a good head on her shoulders and a pistol in her purse at the ready. Jane Fonda, whose production company mounted this film, is cast against type as the mousy, innocent Judy Bernly who calls bondage scenarios “M&M’s” and tears up when reprimanded. She seems less interesting and necessary in the early going, but her fantasy as a big game hunter out for blood liberates the confident, knowing Fonda and afterwards she gets more into the swing of things. Dabney Coleman makes a sensational Franklin Hart, smarmy and insincere at every turn who has a hard time keeping his pants zipped until the ladies finally put him in his place. Elizabeth Wilson is great as the office snitch who hides in bathroom stalls to eavesdrop on office gossip, and Ren Woods as the downtrodden alcoholic worker who blossoms under the new management system is also memorable. In smaller parts, it’s always great to see Henry Jones as a supervisor, Lawrence Pressman and Marian Mercer excel as the spouses to Judy and Hart, and Sterling Hayden has a terrific late film cameo as the company’s chairman of the board.

The film’s original 1.85:1 theatrical aspect ratio is faithfully delivered in a 1080p transfer using the AVC codec. Sharpness is generally exceptional except in a couple of scenes where focus seems a little murky. Color is sharp and true with realistic and very appealing skin tones. Black levels can vary just a bit though are usually quite deep, and contrast has been consistently applied except in certain moments of the fantasies where a dream-like atmosphere is needed. The movie has been divided into 24 chapters.

The disc offers the soundtrack in both DTS-HD Master Audio 1.0 and 2.0 stereo mixes. The 2.0 mix offers modest stereo spread across the fronts, opened just enough to give the sound some welcome ambiance. Both tracks are free from any age-related problems with hiss or crackle and feature the dialogue nicely recorded and in the center channel. Charles Fox’s background score (and Dolly Parton’s Oscar-nominated title song) sound just right along with atmospheric effects when appropriate.

Audio Commentaries: the original commentary from the film’s DVD release features stars Dolly Parton, Jane Fonda, Lily Tomlin, and producer Bruce Gilbert in a chat fest that eventually peters out as they run out of things to talk about and become engrossed in the movie. More consistent in talk about the movie is the second track recorded quite recently with original screenwriter Patricia Resnick and film historians Nick Redman and Julie Kirgo.

Remembering Colin Higgins (4:42, SD): along with some vault footage of Colin Higgins, Jane Fonda, Lily Tomlin, Dolly Parton, and Bruce Gilbert remember the late writer-director whose too short career included some of their favorite works.

Singing “Nine to Five” Karaoke (3:27, SD): the accompaniment for the title song is provided with sing-along lyrics.

Parton/Tomlin Interview (20:39, SD): the two entertainers are interviewed separately with their interviews combined for this featurette.

A truly entertaining comedy, 9 to 5 comes to Blu-ray with its laughs intact, its message as clear as ever, and some most worthwhile bonus features. There are only 3,000 copies of this Blu-ray available. Those interested in purchasing it should go to either www.twilighttimemovies.com or www.screenarchives.com to see if product is still in stock. Information about the movie can also be found via Facebook at www.facebook.com/twilighttimemovies.

Thanks Matt! This has been on my radar since it was announced. I'm just waiting for next week to bundle 9 to 5 with Hush...Hush Sweet Charlotte to make the order.

Matt: It actually Peggy Pope who played the alcoholic. "You go girl" Ren Woods was perhaps best remembered for singing Aquarius in the film Hair.
You must log in or register to reply here. 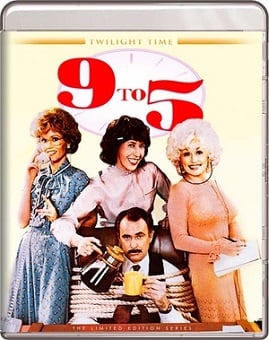