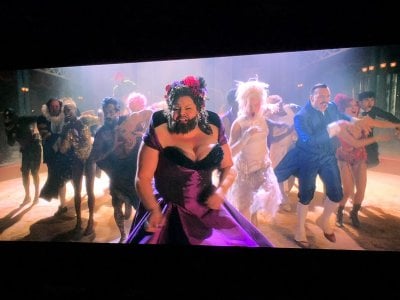 I had not planned on getting into 4k anytime soon — especially as a projector owner. Even though the format has been out for two years now, quality projector prices still remain somewhat unaffordable.

All that being said, my LG Plasma in my living room finally bit the bullet. Though this room was not set up or designed for home theater, it still remains the place where I do most of my everyday viewing. In fact, I generally do all my Home Theater posting while sitting in front of this display with a laptop on my knees.

So, what does one do when their 1080p plasma bites the dust? I am not going out and buying something cheap. That’s just not what I do. When it comes to flat panels, I want pretty much the best that money can buy.

I was pretty much forced to get a 4k display. I also knew that OLED would provide even deeper black levels than my plasma ever could. After much research, I decided upon the LG 65″ C8 OLED. Robert Zohn at Value Electronics had one shipped to my home.

It’s been a good 6 years or more since I have seen anything upwards of 1080 plasma. Seeing the picture on this new OLED display was quite a revelation. I have never seen black levels like this before. There is such a richness to this display even with 1080p content.

The real treat came when I hooked up my new Panasonic UB820 and watched my very first 4k disc.

What did I pick? I thought THE GREATEST SHOWMAN would be the perfect demo disc.

I have to be completely honest. I have seen demos of 4k at the studios and was only slightly blown away by what I was seeing. It was that reason why I just never had the passion to upgrade from 1080p. However, when I began watching the image that was coming out of my display, I just couldn’t take my eyes off of it.

The level of pinpoint sharpness is just off the charts. I always thought Blu-ray looked spectacular — and it does. However, 4k combined with Dolby Vision (if my display and 4k player are putting out DV as promised), is delivering an image that is just mind-boggling. It’s not just the improved sharpness or the detail. It’s the abundant luminance and color gamut.

I had always thought that the upgrade from 1080p to 4k would be minimal. I was wrong. This is almost as night and day as DVD was to Blu-ray — at least on this flat panel 65″ display. I still have a fear that I am not going to see that kind of improvement on a projected display. And, if I want to, I have a feeling that once projectors are available that can handle all these specs, they are going to be priced out of reach. For that reason, my basement home theater will remain 1080p.

I am one of the last handfuls of members on this forum to finally get into 4k. As I noted, it wasn’t really my intention. I completely sympathize with those members still holding on to their 1080p displays. It’s an expensive upgrade when you want to do it right. However, sooner or later the rest of you will also be dealing with failing equipment. When that happens, don’t be afraid to open your wallet and step up. As an initial naysayer, I am pretty damned impressed with what I watched this evening. The difference over 1080p is rather startling though maybe moreso for me because it is an OLED display and I believe it is pushing (as I did the updates) Dolby Vision.