Forum List What's new Dark Style Change width
Log in Register
What's new Search
Menu
Log in
Register
Navigation
Install the app
More options
Dark Style
Close Menu
Posted on January 12, 2020 by Sam Posten
You are using an out of date browser. It may not display this or other websites correctly.
You should upgrade or use an alternative browser.
It’s like riding a bike, right? 3.5 Stars 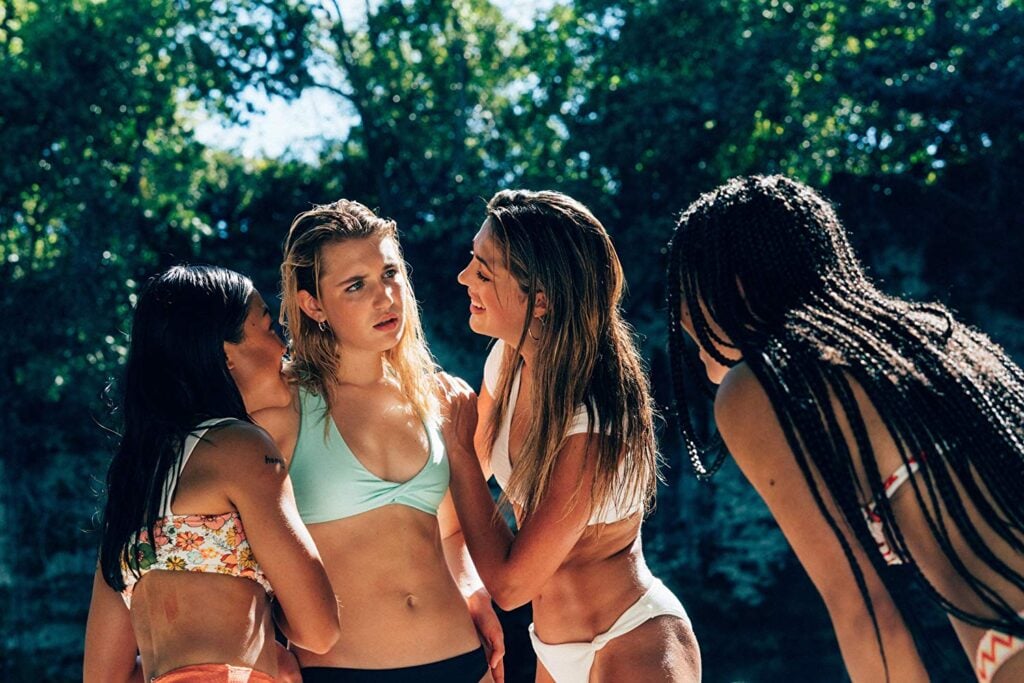 As an unconnected storyline to the original 47 Meters Down (also written and directed by Johannes Roberts) this film has perhaps more in common with The Descent than its namesake. Stepsisters Mia (Sophie Nélisse) and Sasha (Corinne Foxx) have just moved to a new school and are struggling to find acceptance there and with each other. Their parents are torn on finding ways for them to bond, with Mia’s father Grant (John Corbett) setting them up on a local glass bottom boat tour to see the great white sharks. On arriving at the tour facility the sisters bail and instead head out with Sasha’s friends Alexa (Brianne Tju) and Nicole (Sistine Stallone) who tempt them to go see once in a lifetime event with them. They arrive at a crystal clear lagoon and are told that it’s a secret entrance to a Mayan city of the dead, known only to Grant and his assistants. Finding gear the assistants left there they decide to go in to just the first room to see the submerged spectacle, but get spooked by a sightless fish and crash the entry, locking them inside. They are not alone tho, their folly has unleashed a unusual Great White, one that has evolved over millenia to survive in the dark. It may be sightless but it’s other senses are finely tuned. It knows the caves better than the girls do, and they are trapped, scared and losing oxygen fast. The girls only hope is to sneak through the caves and to find Grant and his crew before they are eaten or suffocate. 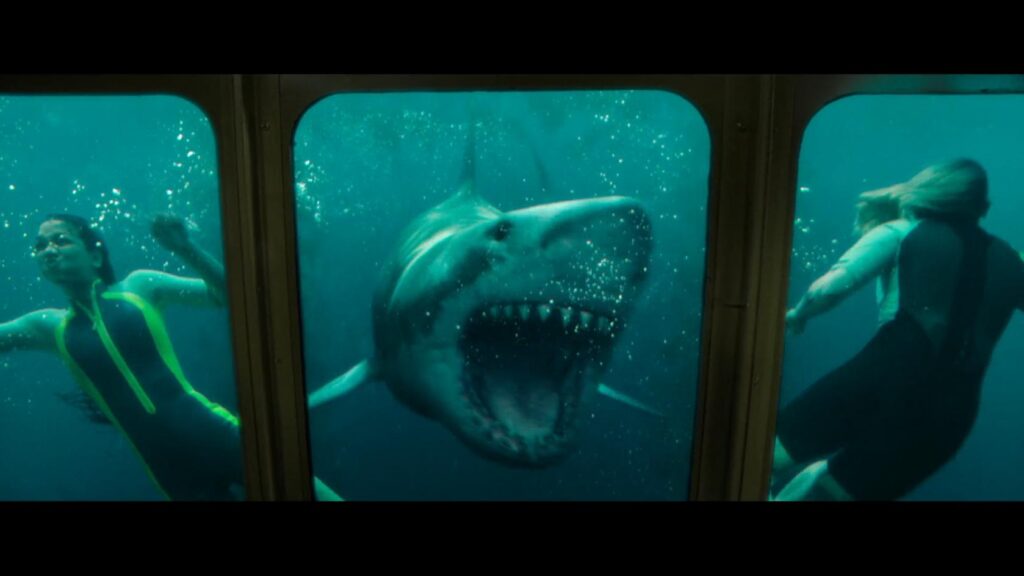 I very much enjoyed both the original 47 meters down and jumped at the chance to review this one, and on watching it I thought it was both a worthy sequel and an interesting homage to The Descent. A number of the jump scares really got me good and I was surprised to find the storyline of squabbling step sisters more endearing than I originally feared. I was pretty surprised to see that the vast majority of critical takes on the film panned it, but heartened that audience scores gave it higher ratings than that (currently 20 for critics and 68 for audiences at RottenTomatoes). Surely the sense of loss and sisterly bonding and teamwork way way better in the original, but the fresh take of literal fish out of water being put in hot water together worked for me here.

The cast is an interesting mix too. While I’ve always loved the takes that John Corbett has brought to slightly off characters, he doesn’t get much to do here except look bewildered at the beginning and try to take charge for a little while at the end. The girls are well cast too, as they play off each other like catty high school competitors and slowly learn to work together. Yes, that’s Frank Stallone’s niece. Just kidding, she’s Sylvester Stallone and Jennifer Flavin’s daughter too, and it looks like they all had fun hamming it up at the premiere. The cast did all their own underwater work and some of the stunts too if the making of featurette is to be believed.

While Uncaged isn’t going to win any major awards it was a good continuation of the series and better than any of the legion of Jaws sequels. That’s a low bar I know but I enjoyed my time with it. 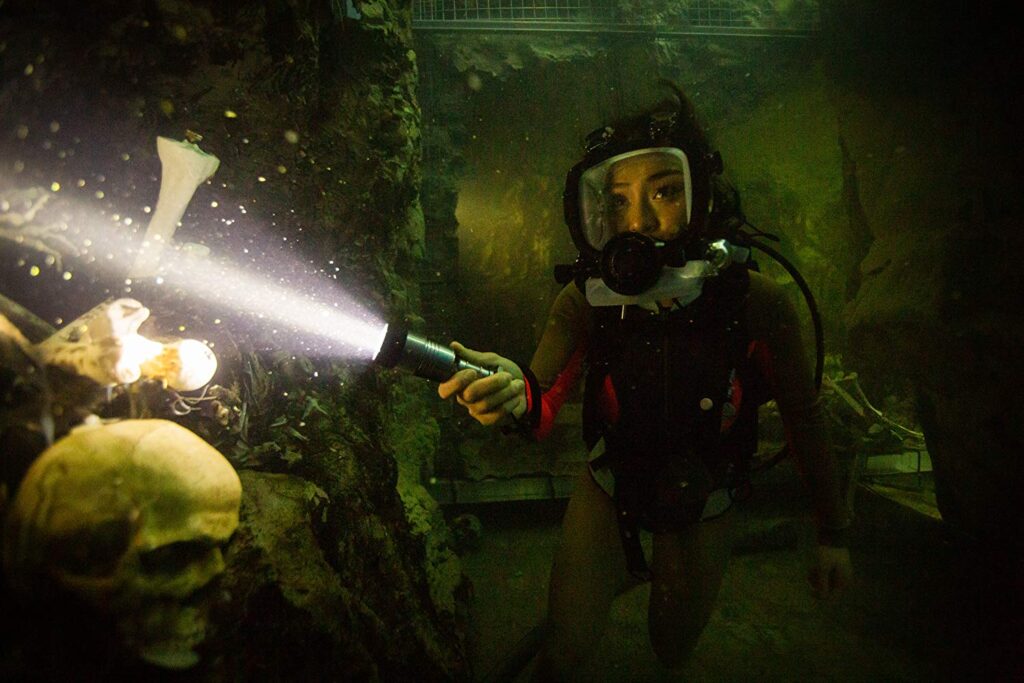 Despite being in murky underwater environs Uncaged looked pretty great shown in 1080p via my 4k projector. The sunny Mexican atmospheres on land literally shine through, and the CGI sharks are ferocious and well rendered. No noise or artifacting complaints here, despite its originally slating to go direct to video. While it had a brief theatrical run it’s miles ahead of most similar films on that bubble. Per IMDB it was shot on Arri Alexas. 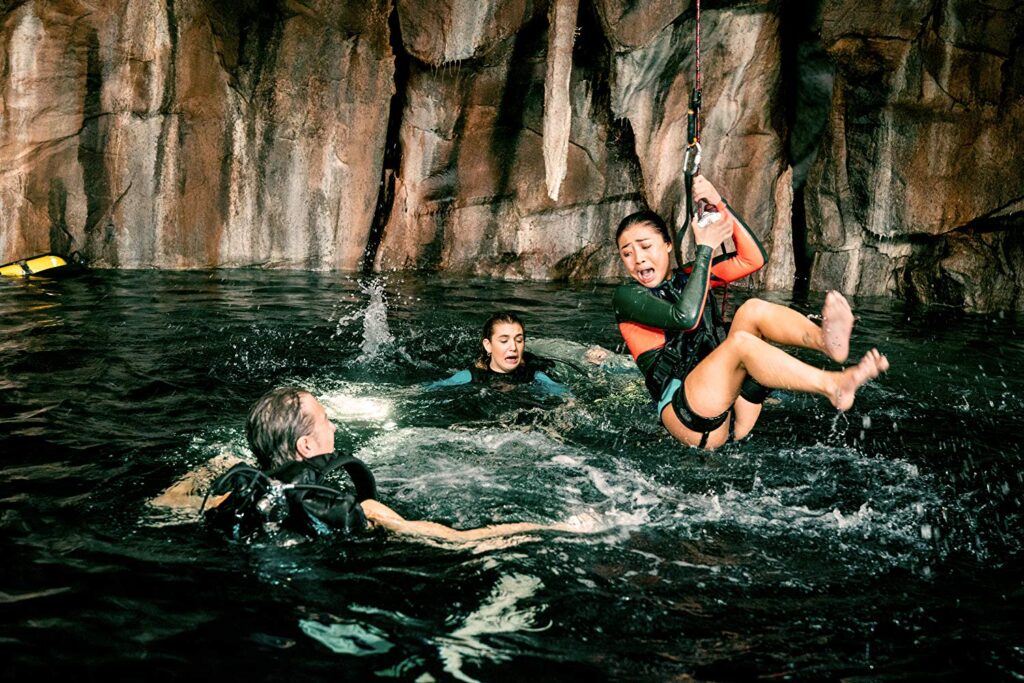 Uncaged had some of my favorite direction sound cues of the last year. The sharks swooping in and out creates great tension and the whirlpool sequence at the end is a real standout. Both are great demo material for different reasons. Not a ton of sub action but it’s not called for either. The film is surprisingly talky, despite the girls apparently never being seen wearing any kind of headphones that would let them chat with each other underwater. =) That said the dialogue is very well done and was always clear. 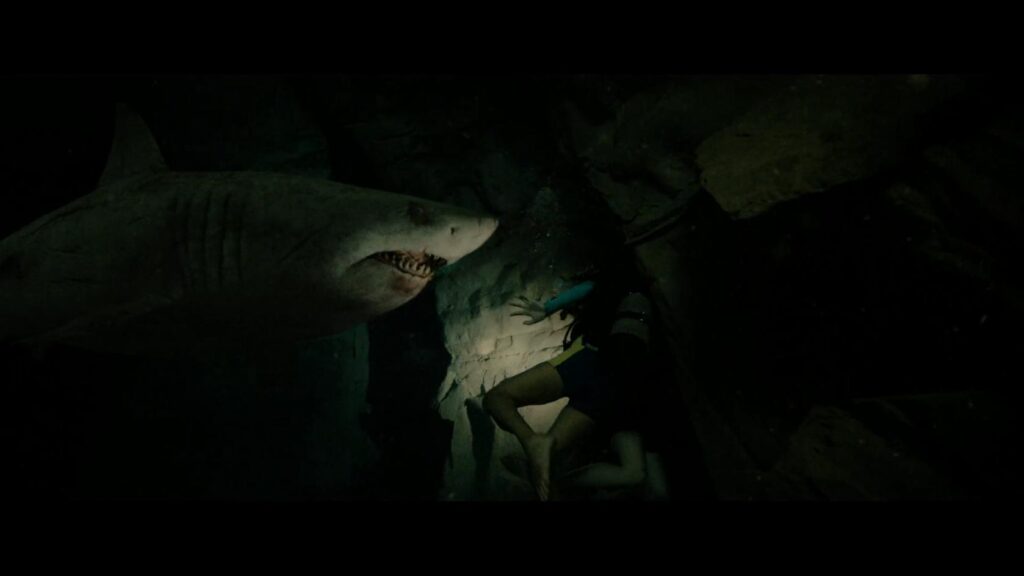 There are but two extras. The first is a behind the scenes featurette talking with cast and crew about the motivations behind something so different than the original and how the girls came to do all their own underwater sequences. That’s worth your time. There’s also a feature length commentary track which I skipped.

Overall Uncaged presents an entirely new standalone shark story that brings it’s own qualities unlike the original. Comparing the two isn’t really fair. What it does bring is a sense of people coming together and a bit of ‘girl power’ in their pushing past limits, experience and fear in order to survive. I liked it, and those who watched it with me really dug the well executed jump scares and tension as well. It’s not a critical darling, no surprise there, but it’s not nearly as bad or as vapid as their scores would lead you to believe. If you liked either the original or The Descent, this will likely be up your alley, give it a shot. 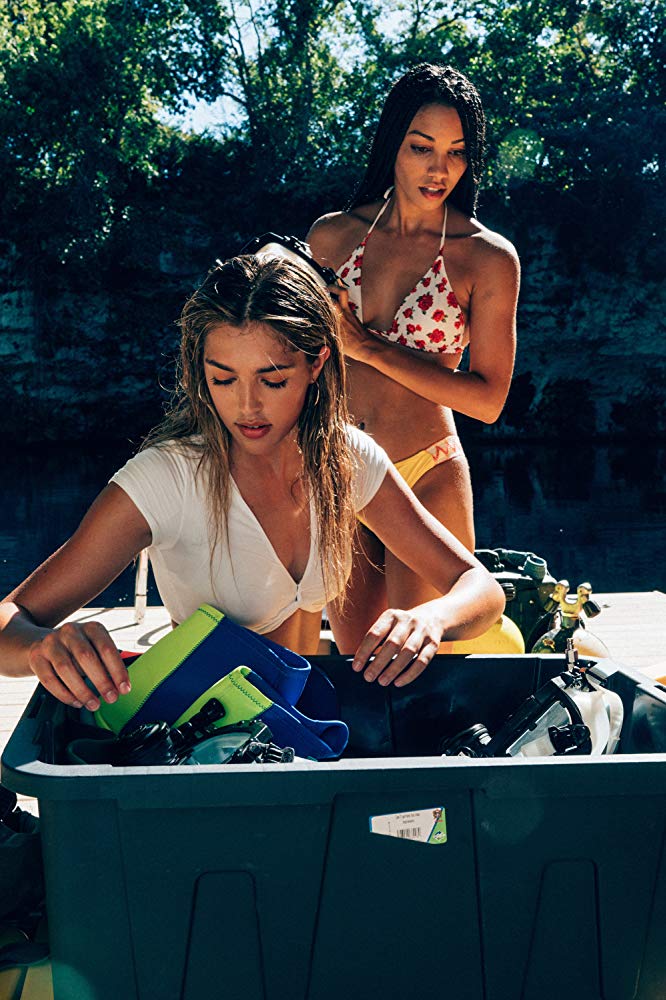 Sam Posten said:
The mayor from Jaws is still the mayor in Jaws 2 =p
Click to expand...

As our current political system shows, gross incompetence doesn't mean you get booted from office!

"Uncaged" might be better than "Jaws 3" and "Jaws: The Revenge".

Might - and again, the only good parts come from the girls in bikinis.

It's consistently stupid, boring and laughable. That's not a good combination!

Glad to hear the CG is acceptable. I was worried based on what I saw in some of the trailers. Maybe they were not final FX at that time?

No idea but it worked well for me.

I bought this and DEEP BLUE SEA 2 back in Dec for $10. The wife and I enjoyed them both in the HT.

EDIT: It was the first 47 that I bought.
You must log in or register to reply here.