36 Hours is an engaging thriller with an attractive cast, outstanding cinematography, and an ingenious premise.

James Garner was tough critic of his own films, and he gave the intriguing World War II thriller 36 Hours just 2 1/2 stars. “I play an American intelligence officer who has knowledge of the impending Normandy invasion,” he writes in his memoir, The Garner Files. “The Germans drug me and fool me into believing the invasion already has taken place so they can find out what I know. The movie doesn’t work because there’s no suspense: everybody knew that in real life the D-Day invasion was a success and that we’d won the war.”

I greatly admire Garner’s career, but on this point I beg to differ. The Day of the Jackal is about an attempt to assassinate Charles de Gaulle; The Eagle Has Landed is about a plot to kidnap Winston Churchill; and The Eye of the Needle is the story of a Nazi spy who is trying to pass along crucial information about the D-Day plans to Germany. I am fairly certain that most people enjoyed those films even though de Gaulle was never assassinated, Churchill was never kidnapped, and the Germans did not know that the Allied invasion would take place at Normandy.

Garner plays Major Jefferson Pike, an Army officer who makes weekly trips to the U.S. Embassy in neutral Portugal. It is the end of May in 1944 and Pike has been briefed on the plans to invade at Normandy. The Allies are aware that the Germans regularly surveil Pike when he makes his trips to Lisbon, but they fear that cancelling his usual trip a few days before D-Day will be a hint that the invasion is about to take place. Pike’s superiors make the calculated risk that he should go to Lisbon as always and try to learn from his contact there if the Germans truly believe that the invasion will be at Calais, which is where most of their European troops are positioned.

Pike never gets to meet with his Portuguese contact. At a Lisbon cafe he is slipped a mickey and passes out. The Germans spirit him away to a waiting airplane which takes him to Germany. A fantastic plan has been concocted to convince Pike that he is an amnesia victim, that the war has been over for more than five years, and that he is a patient at an Allied Occupation hospital. The chief doctor is Major Walter Gerber (Rod Taylor), who was born in the United States but moved to Germany at the age of 16. Everyone at the hospital – doctors, patients, and nurses – speaks English and the American flag is prominently on display. Newspapers have been printed to convince Pike that it is 1950, and fake medical records have been created to explain to him why amnesia prevents him from remembering anything that has happened since 1944. He has been made up to look older, and he is nursed by Anna Hedler (Eva Marie Saint), a concentration camp survivor who assists Gerber with his deceptions.

The German High Command has put a great deal of pressure on Major Gerber. He has been given the resources to fool Major Pike, but the SS is impatient and wants to interrogate the prisoner. The self-serving SS officer, Otto Schack (Werner Peters), reminds Gerber that he has only 36 hours in which to extract the critical information from Pike, after which harsher measures will be taken. Anna has no sympathy for the Germans, but she was released from a concentration camp because she is a nurse who speaks fluent English, and she complies with her orders out of fear of being sent back.

The primary criticism I have seen of 36 Hours is that the denouement occurs too early in the film. But this criticism, it seems to me, is based upon the notion that the denouement is whether or not the Germans are successful in getting Pike to reveal what he knows about the imminent invasion of France. As it happens, a week before watching the Blu-ray of 36 Hours I screened the DVD of 5 Fingers, starring James Mason. That film was about a man who was trying to sell, among other things, the D-Day invasion locations to the Germans. But, as has already been noted, anyone who knows anything about World War II knows that the German High Command was never convinced that Normandy would be the location. What matters is not what happens on D-Day, but whether you care about what ultimately happens to the characters.

James Garner starts out as his usual affable self, but he is quite convincing as the bewildered officer who believes that he has lost all memory of nearly five years of his life. Eva Marie Saint is equally compelling as the Jewish nurse who used her wits to stay alive and found a way out of a concentration camp. Garner writes, “I loved working with Eva, a wonderful actress and a sweet lady.” Rod Taylor certainly looks the part of a German doctor. He doesn’t sound like a German, but that is explained by his character’s upbringing in the United States (by 1964 Taylor had learned to lose his Australian accent). Werner Peters is suitably sinister as the nasty SS officer. John Banner of Hogan’s Heroes fame has a small but important part as an aging and overweight member of the home guard, and you may recognize but not know the name of Celia Lovksy, who plays an elderly housekeeper. She was born in Vienna and in 1933 she fled Germany with Peter Lorre, to whom she was married for 11 years.

Credit for the literate screenplay goes to director George Seaton (Miracle on 34th Street, The Counterfeit Traitor, Airport), who keeps the action moving along at a brisk pace except for a slight lull in the middle. It is an adaptation of short story by Roald Dahl entitled “Beware of the Dog,” about an RAF pilot who loses a leg when shot down over France and the Germans try to convince him that he is in a hospital in England.

I first saw 36 Hours in a theater when I was 16 years old, and I found its unusual plot to be fascinating. I had not seen it again in many years and I enjoyed it almost as much this time around, premature denouement or no.

The flawless, crisp black & white image is framed at 2.35:1 and is delivered in 1800p via the AVC codec. Black levels are inky, contrast is strong, and shadow detail is excellent. The outstanding cinematography is by Philip Lathrop, who in addition to being a superb Director of Photography (The Americanization of Emily, Experiment in Terror, Days of Wine and Roses) was the camera operator for the amazing opening boom shot in Touch of Evil.

The hospital is actually the Wawona Hotel in Yosemite National Park. The buildings and grounds look much the same today as when 36 Hours was shot.

Readers are encouraged to read the rave review by our resident expert, Robert A. Harris:

The DTS HD-MA 2.0 mono audio is equally flawless. Every word of dialogue is clear (English SDH subtitles are available), and there is no hint of distortion or other age-related anomalies. The dramatic score by the great Dimitri Tiomkin is reproduced with excellent fidelity.

The only extra on this Blu-ray disc is the original theatrical trailer, which has a slight amount of damage but overall is in pretty good shape. It perhaps gives away a bit too much of the plot, so I recommend that viewers watch the feature first.

36 Hours is an engaging thriller with an attractive cast, outstanding cinematography, and an ingenious premise. This superb Blu-ray can be pre-ordered at the Warner Archive website or at Amazon. 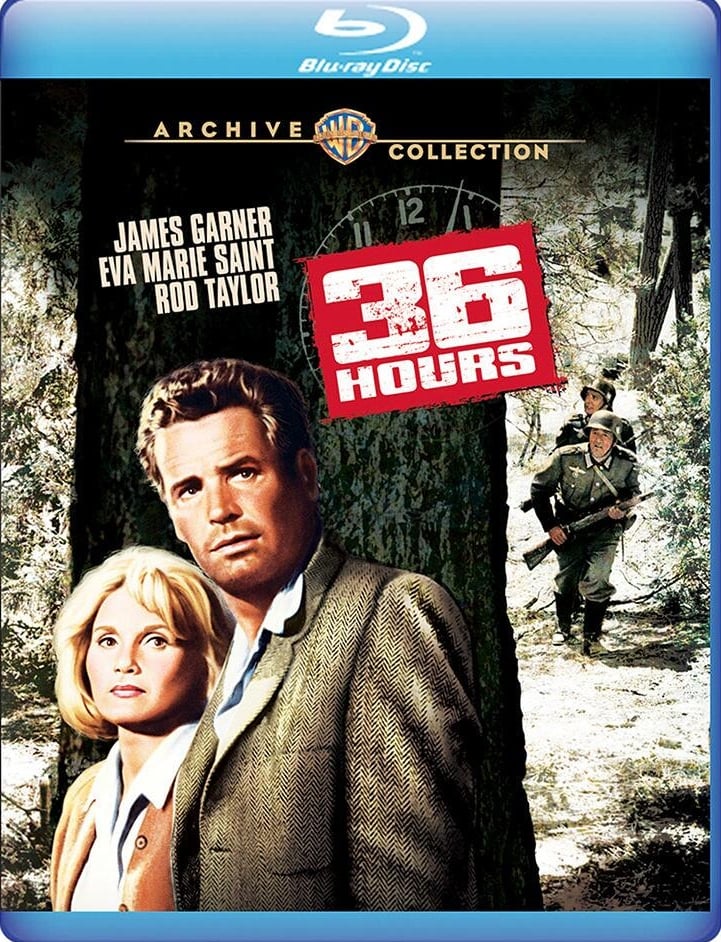