Forum List What's new Dark Style Change width
Log in Register
What's new Search
Menu
Log in
Register
Navigation
Install the app
More options
Dark Style
Close Menu
Posted on May 9, 2017 by Todd Erwin
You are using an out of date browser. It may not display this or other websites correctly.
You should upgrade or use an alternative browser.
Worthy Remake 4.5 Stars

James Mangold’s 2007 remake of 3:10 to Yuma arrives on 4k UHD Blu-ray from Lionsgate in a stunning transfer with improved video and a new immersive DTS-X soundtrack.

I am not a big fan of remakes, especially those of classic films that bring nothing new to the story or concept. James Mangold’s 3:10 to Yuma is the opposite of that, even though it follows many of the familiar elements of the westerns of the 1950s and 1960s. Ben Wade (Russell Crowe) and his gang have been robbing “armored” stagecoaches escorted by the Pinkertons that have been transporting the railroad’s payroll. When Wade is finally captured, he is escorted to the town of Contention to place him on the 3:10 train bound for Yuma Federal Prison by railroad executive Grayson Butterfield (Dallas Roberts) and enlists the aid of Pinkerton agent Byron McElroy (Peter Fonda), Doc Potter (Alan Tudyk), and rancher and Civil War veteran Dan Evans (Christian Bale), who volunteers in hopes of saving his ranch from foreclosure and being sold to the railroad but also to prove to his sons that he isn’t a coward. Hot on their trail is Wade’s gang, lead by Charlie Prince (Ben Foster), who will go to any length to free his captain.

Based on a short story by Elmore Leonard, the screenplay by Michael Brandt and Derek Haas borrows heavily from the script of the 1957 original by Halsted Welles (who was given a writing credit for the remake) in basic structure and themes, then builds upon that. Wade isn’t necessarily the villain of the piece, but a gangster who has become bored with robbing stagecoaches, and Crowe’s performance exemplifies that. The film also explores Evans as a disgraced war veteran, possibly suffering from PTSD, returning home a changed man that his wife and kids don’t recognize. Director Mangold keeps the film moving at a brisk pace, but never allows the action sequences to overshadow the character drama. 3:10 to Yuma is possibly one of the best westerns in the last 20 years.

3:10 to Yuma was one of the early Lionsgate releases on the then-new high definition Blu-ray format in 2007. That original disc is included in this set, and while it may have been praised by many for its transfer back in 2007, a lot has changed in the art of compression and mastering in ten years, and I found the movie almost unwatchable on that 2007 Blu-ray with frequent use of noticeable edge enhancement and noise reduction. The good news is that Lionsgate’s 2160p transfer with HDR (derived from a 2k digital intermediate) excels where that older 1080p falters. Fine detail is improved slightly, providing more noticeable beard stubble on the actors, grains of sand in the desert, and textures in the fabrics of the costumes. Shadow detail is improved upon significantly, with much deeper blacks that don’t crush. Colors appear much warmer and natural in 4k than on the 1080p Blu-ray, and contrast is more refined while the Blu-ray was a bit blown out in some sequences.

3:10 to Yuma receives an upgrade from 7.1 LPCM on the original Blu-ray to a more immersive DTS-X mix. LFE is more refined but never too boomy. Gunshots, wind, fire, stampeding cattle are spread across the entire soundstage, coming at you from all directions. Dialogue is clear and understandable throughout, never overpowered by music or effects.

As with most of Lionsgate’s recent UHD releases, all of the special features can be accessed on the UHD disc as well as the included 1080p Blu-ray.

Lionsgate continues to release great 4k UHD Blu-rays of its back catalog, and 3:10 to Yuma is no exception.

Nice another positive review. I'm looking forward to watching this, hopefully this weekend.

Nice review Todd. I agree with your assessment.

But watch out for the naysayers in RAH's thread that I'm sure will pop in here soon to say we're blind sycophants.

I'm on the fence as to whether to pick this one up. I watched the BD quite some time ago (borrowed it from a friend), and my wife actually enjoyed it more than I did -- and she's not a fan of the western genre. I prefer the original film over the remake. However, your positive review, RAH's endorsement, and the attractive price is going to make it difficult to resist adding the UHD to my collection, Todd.

I love this film. Well done. I have a couple small nitpicky issues with this 4K BD, but otherwise I think this looks great. And is an improvement over the BD.
You must log in or register to reply here. 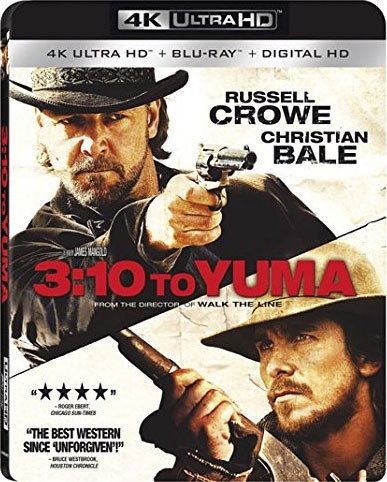