Forum List What's new Dark Style Change width
Log in Register
What's new Search
Menu
Log in
Register
Navigation
Install the app
More options
Dark Style
Close Menu
Posted on December 4, 2017 by Todd Erwin
You are using an out of date browser. It may not display this or other websites correctly.
You should upgrade or use an alternative browser.

Four-time Oscar® nominee Ethan Hawke (Best Supporting Actor, Boyhood, 2015) stars as an ex-mercenary who’s given one last shot at redemption in the wall-to-wall nonstop action-thriller 24 Hours to Live, exploding on Blu-ray™ (plus Digital), DVD and Digital February 6 from Lionsgate. The film is currently available On Demand. Directed by Brian Smrz, known for his stunt work on films like Live Free or Die Hard, Minority Report and Iron Man 3, and written by Ron Mita, Jim McClain, and Zach Dean, the film is produced by John Wick’s Basil Iwanyk, Gregory Ouanhon, and Mark Gao. This action-thriller is sure to keep you on the edge of your seat. The 24 Hours to Live Blu-ray and DVD will be available for the suggested retail price of $21.99 and $19.98, respectively.

Ethan Hawke gives an explosive performance in this epic action-thriller from the producers of John Wick. Travis Conrad (Hawke) is a former special-ops marine turned mercenary who is lured out of retirement by the covert company that used to employ him. After Travis is killed during a brutal firefight, a new regeneration surgery gives him a second chance at life—and one last shot at redemption.

Rating: R for strong bloody violence throughout, language and some drug use 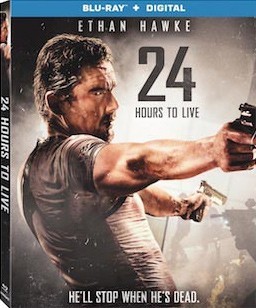