Despite a talented cast headed by Chadwick Boseman (Black Panther) and produced by the Russo brothers (Avengers: End Game), 21 Bridges plods its way with a ludicrous plot and unsatisfying ending.

I often enjoy a good action thriller as much as anyone. I had some high hopes for 21 Bridges based on the press materials alone. It has star power, including Chadwick Boseman (Black Panther), Oscar-winner J.K Simmons (Whiplash, Spider-Man), Taylor Kitsch (True Detective) and Keith David (Community, They Live), a screenplay co-written by Matthew Michael Carnahan (World War Z, The Kingdom), and was produced by Anthony and Joe Russo (Avengers: Infinity War). Unfortunately, the movie is hampered by a ridiculous premise and an even more ludicrous and tired plot, with characters doing things that are just plain stupid.

Two thugs, Michael Trujillo (Stephan James) and Ray Jackson (Taylor Kitsch), are hired to break in to a restaurant after hours to steal 30 kilos of cocaine for a rival gang. Upon entering the vault, they find it full of 300 kilos instead. Being greedy, they take 50, then find themselves in a shootout with local police, killing eight and fleeing by car. Arriving on the scene is Detective Andre Davis (Chadwick Bosemen), known throughout the department as being the best at tracking cop killers. Since drugs were involved, he is partnered with Detective Frankie Burns (Sienna Miller) from Narcotics. Due to the high profile of the case, the FBI becomes involved, with Davis, Burns, the two FBI agents, Captain McKenna (J.K Simmons), and Deputy Chief Spencer (Keith David) deciding to have the unseen mayor of New York order the lock down of Manhattan by closing all 21 bridges (hence the movie’s title) and all other modes of transportation connecting the island to the mainland until 5:00 am. All this for two thugs who made off with 50 kilos of coke and killed eight cops? Really? OK, I’m willing to go with the flow, but the movie just gets more and more ridiculous from there. Davis suspects a conspiracy afoot, that there could be some dirty cops involved, but who? Certainly not his new partner from Narcotics, especially after she walks out of an interrogation to take a call from her babysitter. Oh, and to make things more “suspenseful,” the guy offering the two thugs fake passports and safe passage out of the country, just before he is killed by police storming his  home, hands the two thugs a USB drive containing information on all of the dirty cops that are getting payoffs. Any audience member with half a brain knows where this is headed 20 minutes in, desperately waiting for the movie to catch up.

21 Bridges was captured digitally with Arri Alexa XT M and Sony CineAlta Venice cameras and completed as a 2K digital intermediate. Universal delivers another stellar looking Blu-ray, which is quite a feat considering the movie was shot mostly at night. Detail is exceptional, capturing the grittiness of what is supposed to be late night Manhattan (most of the exteriors were actually shot in Philadelphia). Black levels are also excellent, providing deep shadow detail in many of the very dark sequences. Colors are natural and not overly saturated.

The DTS-HD MA 5.1 default track does the best it can, providing an adequate sense of immersion with a basic 5.1 set up. Dialogue is clear and understandable throughout, directed mostly to the center channel with some panning where necessary. Both LFE and surrounds help punctuate the fits of gunfire during many of the action sequences as well as the pulsing dance music during the one night club sequence.

An excellent presentation on Blu-ray can’t save this cliched and tired action thriller.

I like these type of police procedural movies with simple plots so sue me.
Expand signature
Crawdaddy's favorite "The Mandalorian" Quotes: "This is the Way" and "I have Spoken"

Robert Crawford said:
I like these type of police procedural movies with simple plots so sue me.
Click to expand...

Yikes- I bought this blind. I’ll try to give it a view this weekend.

Sorry, must disagree. This is the kind of solid, meat-and-potatoes crime thriller that UA and Fox were doing so well in the '70s. (At times it had a PELHAM 123 vibe, minus the comedy.) Fine cast, great use of Manhattan locations and a real sense of urgency. So yeah, the surprises aren't really surprises, but a film like this is about the journey (literally, in this case) and not the destination, and in that sense it succeeds handily. Just my two cents.

I always enjoy crime dramas, but this one might have to be a 'wait for cable' title given Todd's review and a 51 rating on Metacritic.

My feelings are mixed.

First, this film was actually shot in Philadelphia for Manhattan. Overhead helicopter shots are definitely Manhattan.

The problem with this movie is that while there are a few good action pieces, overall as another HTF member put it in a different thread, it's formulaic.

Overall, this would have been more satisfying for me at a $9.99 digital purchase (should have waited like Crawdaddy). Don't think anyone should pay full price for this Blu-ray.
Expand signature
Ronald J Epstein
Home Theater Forum co-owner 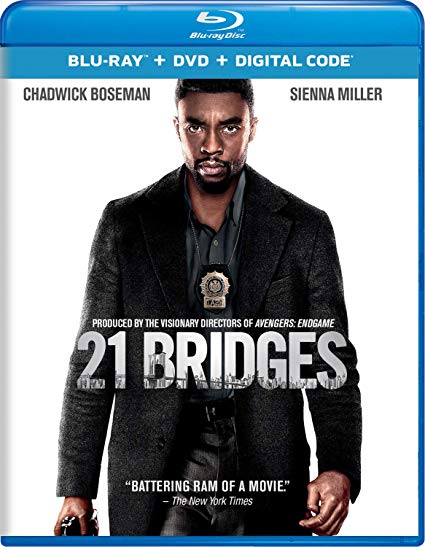