Forum List What's new Dark Style Change width
Log in Register
What's new Search
Menu
Log in
Register
Navigation
Install the app
More options
Dark Style
Close Menu
Posted on January 10, 2019 by Todd Erwin
You are using an out of date browser. It may not display this or other websites correctly.
You should upgrade or use an alternative browser.
Landmark cinematic achievement 5 Stars

Warner celebrates the 50th Anniversary of Stanley Kubrick’s 2001: A Space Odyssey with a newly restored picture and sound. Highly recommended.

I feel obligated to be completely upfront as I write my review of Stanley Kubrick’s classic masterpiece 2001: A Space Odyssey. It is a movie I have admired, even from the first time I saw it on television way back in the mid 1970s, but yet have always found difficult to view in one sitting. It is a movie that, for lack of a better term, exists and takes its time telling its very high-brow story. I’m fairly certain that today’s audiences would simply dismiss the film as “boring” and “slow,” and they would be right, to an extent. It is the majestic beauty of its marriage of classical music and picture that are simply breathtaking with then-cutting edge visual effects that still hold up today that allow it to still be considered one of the major and impressive accomplishments in the history of cinema. If 2001 didn’t exist, we likely wouldn’t have Silent Running, Star Wars, Close Encounters, etc.

It should be noted that this release is not the “Unrestored Edition” supervised by Christopher Nolan and released to IMAX theaters last summer. Warner scanned the original 65mm camera negatives and effects shots in 8k resolution, digitally cleaned up the image and color timed to create a new 4K digital intermediate from which this 4K UHD (and included Blu-ray) was created, and then used both Dolby Vision and HDR10 high dynamic range on the UHD to improve the wide color gamut and contrast. The results are impressive, possibly the best 2001 has ever looked. Detail is striking, from the hairs on the apes in the Dawn of Man sequence to information on many of the displays aboard Discovery One. Film grain is noticeable but appears natural and is never distracting. Colors are also more natural but are not as bold as one would expect on a 4K release, but that was intentional as a way to replicate the original 70mm release prints. Also, aspect ratio has been corrected to 2.20:1, as it was seen in original 70mm engagements in 1968. Great care was taken by Warner Brothers, and it shows in this release.

Two English options are provided, both in DTS-HD Master Audio 5.1 – the 1999 restored soundtrack (identical to the previous Blu-ray release) and the original 6-track 70mm mix repurposed in 5.1. The restored mix is the one to listen to, which has an overall “cleaner” sound to it, with a much wider dynamic range and greater fidelity. Dialogue is much clearer as well, as it tends to sound somewhat thin with a hint of distortion on the original theatrical mix. Other than that, the two mixes are fairly identical in their use of channel separation and surrounds.

Warner’s 4K UHD release of 2001 is a three-disc set, with a movie-only 4K UHD disc, a movie-only Blu-ray disc, and a Blu-ray disc of Special Features (all of which have been ported over from the previous Blu-ray release).

Audio Commentary with Keir Dullea and Gary Lockwood: This track, ported from the previous Blu-ray release, can be found on both the 4K UHD and Blu-ray editions of the movie.

This newly restored edition of 2001: A Space Odyssey is a must-have for any true cinephile, home theater enthusiast, or film student. Highly Recommended.

"The restored mix is the one to listen to..."

Many folks would disagree with this, as the "restored" 1999 track is a remix that removes directional effects, etc.

If you can forgive a quick footnote, the "unrestored" version was released last May to 70mm theaters. This new edition contains the 4K restoration, which did play in IMAX theaters last August. (A handful 15/70 IMAX film locations showed the unrestored 70mm print, but the vast majority of IMAX locations played the new digital restoration.)

I agree with Vincent that the 1968 track is the one to listen to, but Warner has made this confusing by labeling the 1999 track as "restored," which doesn't seem the proper terminology.

Especially since I think the "restored" track is the same one that was on the last release.

Wayne_j said:
Especially since I think the "restored" track is the same one that was on the last release.
Click to expand...

Yes, the 1999 track is identical to the previous Blu-ray, previous DVD, etc. That's another reason why "newly restored" seems such an odd term - it's been the default audio track for this title for 20 years!

Warner has done tremendous work on their actual 4K restoration of the film, the disc release is fantastic, and Todd's review is fantastic, but Warner is sure not making any of this easy with the most confusing verbiage surrounding a release I've ever experienced.

I don't think the "Restored and Remixed" track on the UHD is quite the same as the 5.1 on the previous Blu-ray. The older remix centered most of the dialogue, but on the UHD's "restored" track, at least some of the original directionality is retained (one example is Dr. Floyd's briefing just after arriving on the moon). Also, the music seems like it's been cleaned up a bit, and HAL's voice sounds a little fuller in some scenes (though that could be better encoding).

Also, on the "restored" remix, the Main Title music is very slightly out-of-sync (the credits don't "hit" quite where they're supposed to).

Not sure how they went about it, but the new remix does seem to be altered a bit from the previous one.
Last edited: Jan 11, 2019

On the 1968 original and 1977 70mm reissue prints the announcement about the sweater came out of the
surround track only, so this 1968 version on this UHD is not original as heard in cinemas.
Last edited: Jan 11, 2019

Bryan Tuck said:
Also, on the "restored" remix, the Main Title music is very slightly out-of-sync (the credits don't "hit" quite where they're supposed to).
Click to expand...

Do any of you have a full Atmos set up ? Just asking because at least to me the extraction from the Dawn of Man possible that gives full immersion particularly in the ape altercation scenes but also the leopard growling at night seem much more believable and robust in the "restored " track at least for me. So much more coming from the height channels.

Isn't there already a long 4K UHD review of this movie??

HTF disc reviews and the "A Few Words About..." postings by Robert Harris are two different things.
J

DP 70 said:
On the 1968 original and 1977 70mm reissue prints the announcement about the sweater came out of the
surround track only, so this 1968 version on this UHD is not original as heard in cinemas.
Click to expand...

Quite right Derek!
That's always my test to see how much the sound has been buggered up by the "experts"!
My first viewing of the 4k tonight on my new PJ.
The 1968 track is the obvious choice.

john a hunter said:
The 1968 track is the obvious choice.
Click to expand...

For all those reasons set out above.
Will listen for height channel involvement.
P

The original track may have some different directional mixing, but the newer track beats the original all over the place when it comes to the actual quality of the sound. The 1968 track is quite thin in comparison. The nice thing about this release is that people will be able to listen to whichever they prefer. After sampling both, I will probably listen to the 1968 mix once, just out of interest, but the new track will be my go-to for the rest of my viewings.

I was just wondering if this new version made the front screen projection scenes more noticeable that they are stage sets instead of actual locations?

WinstonCely said:
I was just wondering if this new version made the front screen projection scenes more noticeable that they are stage sets instead of actual locations?
Click to expand...

I've found that true of this version, the previous blu-ray, and even the DVD before that. There's something about the stability of digital video that makes it stand out more. It blends together better on film, even in 70mm.

I disagree. There has definitely been some digital cleanup done on the Scotchlite front projection screen artifacts, at least in the 4K version of this release. On the old Blu-ray it was pretty easy to spot the diagonal swaths of Scotchlite strips in the backgrounds of Dawn of Man sequences. They're completely gone in the new 4K release. That doesn't change the fact that it's still pretty easy to see that these are studio sets and not location shots, but the crosshatching on the backgrounds is no longer there and things blend much better.

I also felt like the Dawn of Man section on the UHD disc was handled well. Honestly, unless you know that it was filmed on a soundstage, very few shots will give you any hints. The back screen was clearly visible in the previous BD release, but it's barely noticeable unless you're really looking for it in the UHD version.
You must log in or register to reply here. 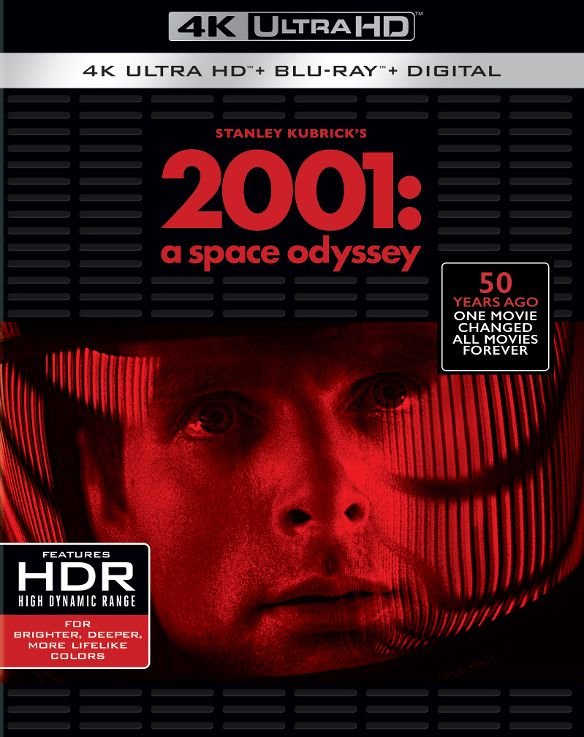