Forum List What's new Dark Style Change width
Log in Register
What's new Search
Menu
Log in
Register
Navigation
Install the app
More options
Dark Style
Close Menu
Posted on April 11, 2016 by Richard Gallagher
You are using an out of date browser. It may not display this or other websites correctly.
You should upgrade or use an alternative browser.
A dark and chilling film 4.5 Stars

10 Rillington Place is a fascinating true story about a miscarriage of justice which has been credited with prompting the United Kingdom to abolish the death penalty for murder in 1965. It has arrived on Blu-ray from Twilight Time with a typically superb transfer from Sony.

Serial killer John Christie (Richard Attenborough) is the embodiment of what political theorist Hannah Ahrendt called the “banality of evil.” Christie is unexceptional in every respect, other than his ability to make people believe that he is a nice man. His home, the address of which gives 10 Rillington Place its title, is a dingy, lower-class flat in a dilapidated section of London’s Notting Hill district. One evening, during a blackout in 1944, he is visited by Muriel Eady (Phyllis MacMahon), a woman who has been suffering from bronchitis. She has been having difficulty sleeping at night, and Christie has promised her that he can produce a “compound” which will alleviate her condition. He hooks her up to a mask and instructs her to breathe deeply. What she does not know is that the mask is also hooked up to the gas line, which Christie engages. When she realizes what is happening she tries to fight back, but she is overcome by the fumes and slips into unconsciousness. Christie then rapes and strangles her. Afterwards he buries her body in his small garden, and while digging he accidentally exposes the leg of another corpse. Muriel is not Christie’s first victim.

In 1949 Tim Evans (John Hurt), his wife Beryl (Judy Geeson), and their infant daughter Gwendolyn arrive at 10 Rillington Place to look at a flat which is for rent on the third floor of the building. Tim is a simple man who can neither read nor write, and he earns meager wages driving a delivery van. Christie lets them in and they meet his dowdy wife, Ethel (Pat Heywood). The pretty Beryl catches Christie’s eye, and he convinces Tim to take the flat by telling him that another couple is anxious to rent it. Tim and Beryl are barely making ends meet, and shortly after they move in Christie is visited by a collection agent. It seems that Tim and Beryl are behind on their furniture payments. When Christie brings this to Tim’s attention, Tim ludicrously tells him, “I’ll be getting a new job shortly, I wouldn’t wonder. They’ve asked me if I want to train as a manager – or as a managing director…um, or something, you know.” When Christie asks if he wouldn’t need to learn to read and write to be a manager, Tim responds, “You have secretaries – things like that, see?”

Beryl then tells Tim that she is pregnant and that she has taken some pills which are supposed to terminate the pregnancy. Later that night a loud argument ensues which wakes up their daughter and can be heard by the neighbors. Christie intercedes and warns them that they could be evicted if they keep it up. The next day Christie returns home from work and see Beryl outside in the wash house (the building has no indoor plumbing). He invites her in for tea and gets her to open up to him. She explains that she is going to have another baby but that she and Tim cannot afford to raise another child. Christie tells her that he was studying to be a doctor before the war and that he has worked with specialists who taught him how to perform abortions. He offers to terminate Beryl’s pregnancy, as a favor, but of course he has something far more sinister in mind.

The story of 10 Rillington Place sent shock waves through the United Kingdom and was well known to British audiences, but is delivers a considerable degree of suspense to people who are unfamiliar with what happened. Richard Attenborough is excellent as the malevolent Christie, who cruelly manipulates the naive and uneducated Tim. John Hurt turns in a brilliant performance as the bewildered husband, and the estimable Judy Geeson is attractive and sympathetic as Beryl. In some respects the film is reminiscent of In Cold Blood, in particular because so much of the filming was done at the actual locations. By the time the film was made the name of the street had been changed, but the buildings were still in use. The tenants of what had been 10 Rillington Place refused to move out for the filming, so the adjacent row house was used. However, unlike In Cold Blood this film is not particularly interested in trying to dissect the motives for murder. It is an indictment of both sloppy police work and the death penalty, and when the truth came out there was outrage than an innocent man was executed. The execution scene, incidentally, is shockingly perfunctory.

Director Richard Fleischer had a long and distinguished movie career which encompassed many genres, but his interest in murder – particularly senseless murder – is exemplified by such films as Follow Me Quietly, Compulsion, and The Boston Strangler. Here his filmmaking is brilliant – the opening scene has a shot of Christie peering out from behind his window blinds which is positively chilling. The excellent screenplay is by Clive Exton from a book by Ludovic Kennedy.

10 Rillington Place is delivered in 1080p via the AVC codec, and it is properly framed at 1.66:1. This is a very dark film, both in tone and appearance, so the sharp image, strong black levels and very good shadow detail are welcome. There is not a hint of damage or other age-related anomalies, and a natural level of film grain is retained. The cinematography is by Denys Coop (This Sporting Life, Bunny Lake is Missing, etc.).

Readers are invited to read the pithy comments of our resident expert Robert A. Harris. His reference to being “stuffed under a creaky floorboard” is a bit of black humor.

A few words about…™ 10 Rillington Place — in Blu-ray

The English 1.0 DTS HD-MA soundtrack is clear and occasionally powerful. The dialogue is understandable throughout, and English SDH subtitles are optional. The isolated track of John Dankworth’s evocative score is in 2.0 DTS HD-MA stereo.

In addition to the isolated score track, the extras include the original theatrical trailer and two commentary tracks. The first commentary track has three participants: Nick Redman, film historian Lem Dobbs, and the delightful Judy Geeson. The second commentary track is a solo effort by John Hurt. Together they provide some wonderful insights into the making of 10 Rillington Place.

Also included is an illustrated booklet which contains an excellent essay by Julie Kirgo.

10 Rillington Place is a dark, troubling film which is not for all tastes, but it an unforgettable one which will linger in your mind long after the final scene. The Blu-ray has been released in a limited edition of 3,000 copies, so those interested in purchasing it should go to the Twilight Time website or the Screen Archives website and confirm that it is still available.

Have to see this one. Perhaps tomorrow.

I think the name of Richard Attenborough's character was actually Christie, not Cronin. Otherwise a very helpful review, thank you.

Thanks for the correction. I don't know why I had "Cronin" on my mind! The edits have been made.
You must log in or register to reply here. 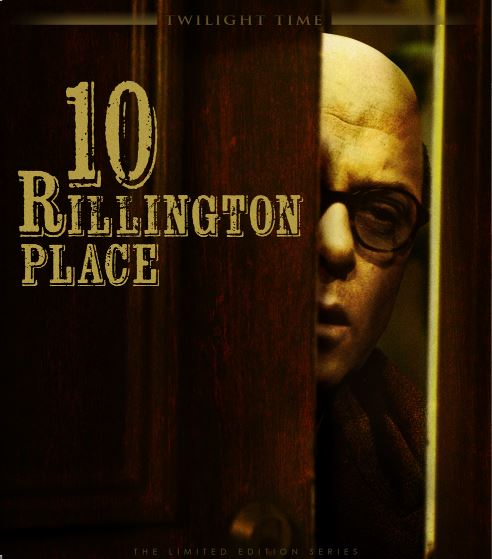